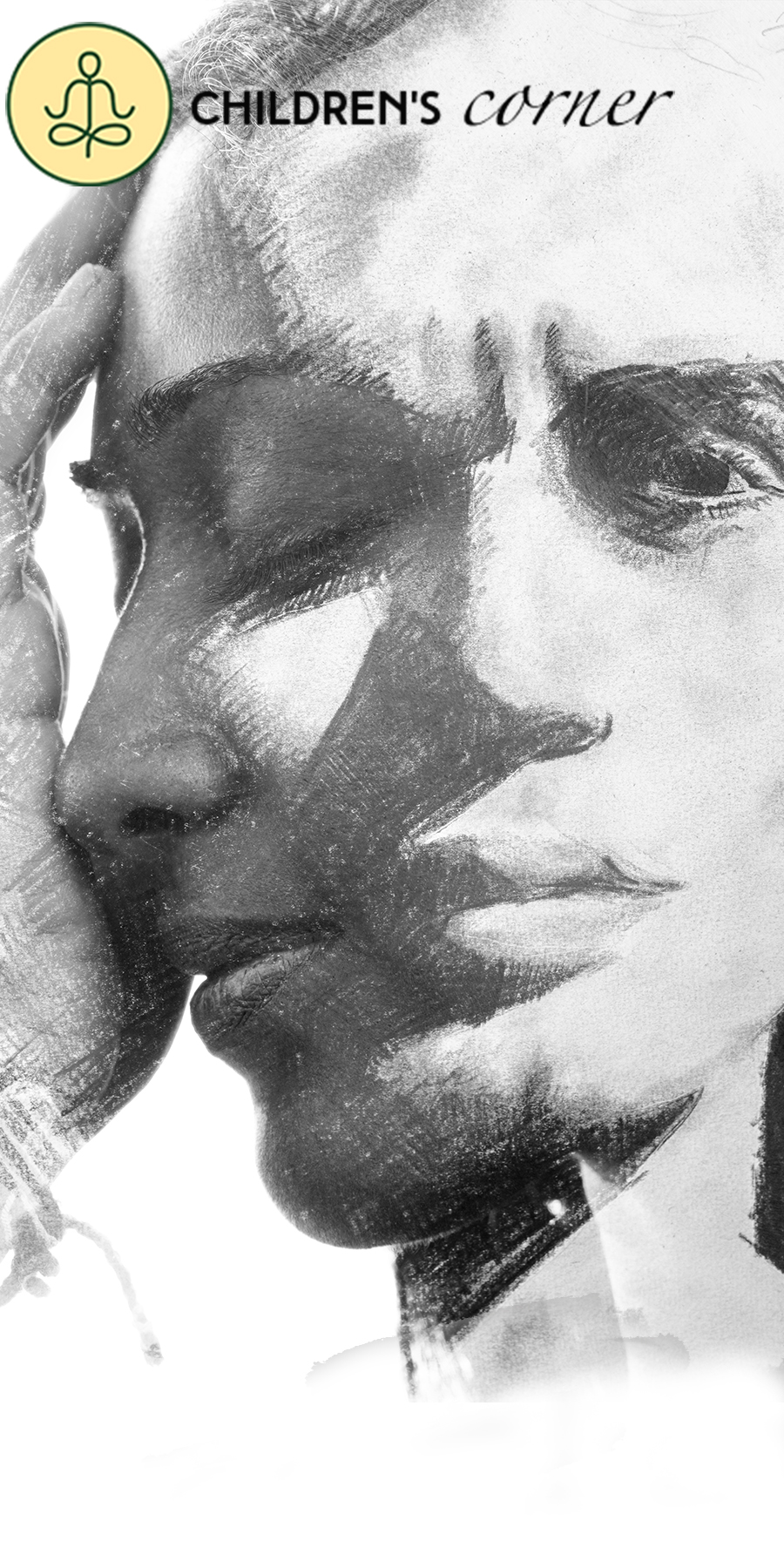 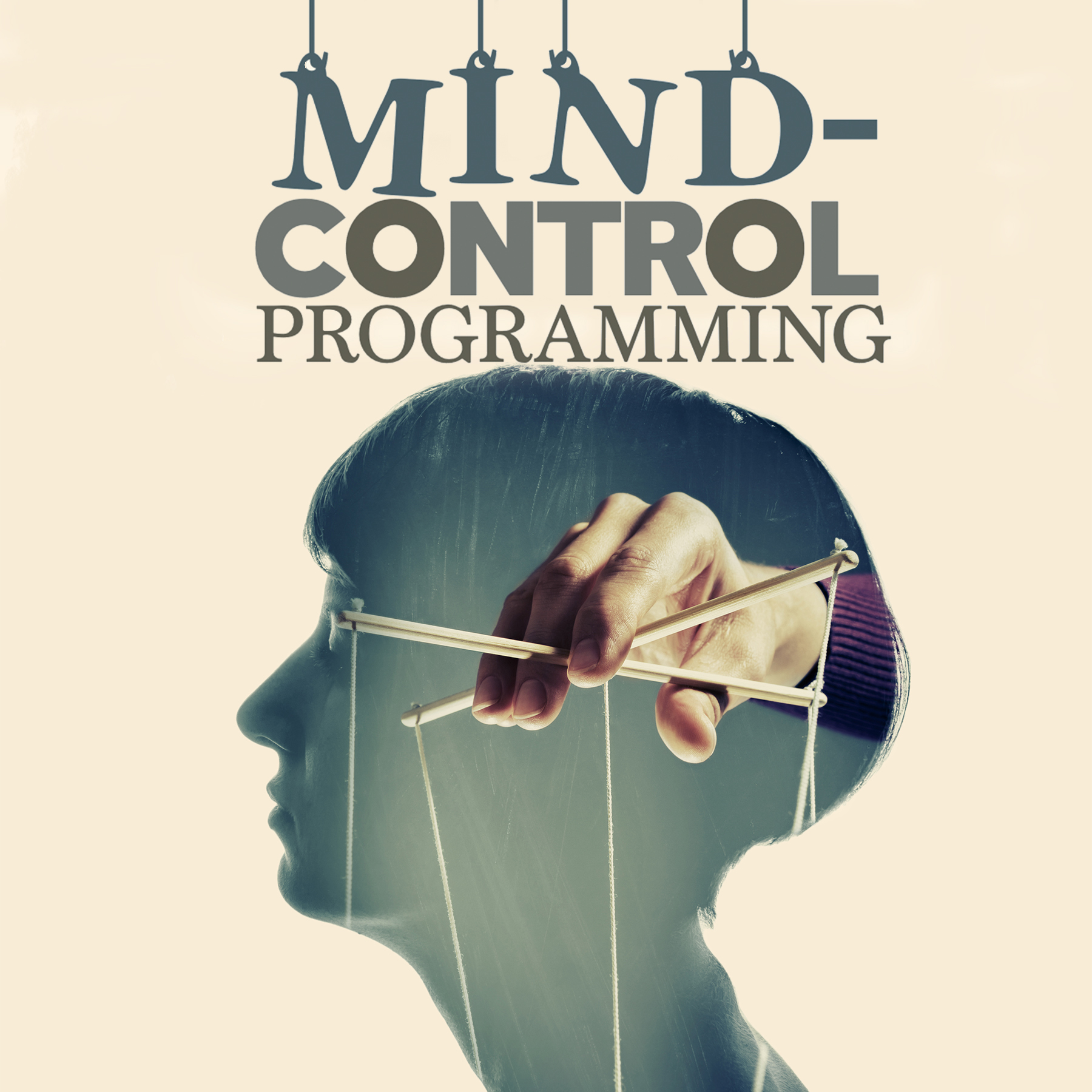 Lisa Catano shows how it is possible to take responsibility and break free from imposed fear to spare our children from the vicious cycle of mind-control programming.

A child in a mind-control programme, it’s a fear-induced ‘punishment-reward system’ where the child has to keep working for their love. Because you are a child and know no other reality (you have nothing else to compare with), this is reality. And it remains your reality throughout adulthood due to these early learned messages that become even deeper subconscious programmes. Emotions like anxiety, guilt and shame, anger and depression, despair and frustration are all keys to awaken you from the programme in adulthood. Some hard life knocks need to take place as ‘opportunities’ for realising and then releasing this subconscious content. Pain heals pain. You will find that you will often choose friends, partners and spouses in life that mimic fear-induced mind-control and disempowerment.

Because control is a quality that is opposite to love, you’ll find your whole childhood and beyond that, working for something that never really comes. You may get snacks of it, I love you’s, and even gifts – but it’s still part of the punishment-reward programme which isn’t authentic. You know this deep inside at a Soul level (your feelings never lie), and thus develop fear-based coping mechanisms, like addiction, to emulate self-denial and what is missing. The thing about addiction is that it imitates the pattern of punishment-reward leaving an even deeper hole for despair, and a disconnect from yourself. Mental illness and certain behavioural traits like bipolar mood disorder take shape, because of the imbalance felt within. Depression and anxiety disorders, ADD and ADHD, compulsive behaviour including perfection addiction, inability to cope with everyday life without medication, over-dramatised reactions to life and a lack of empathy, are some of the symptoms. 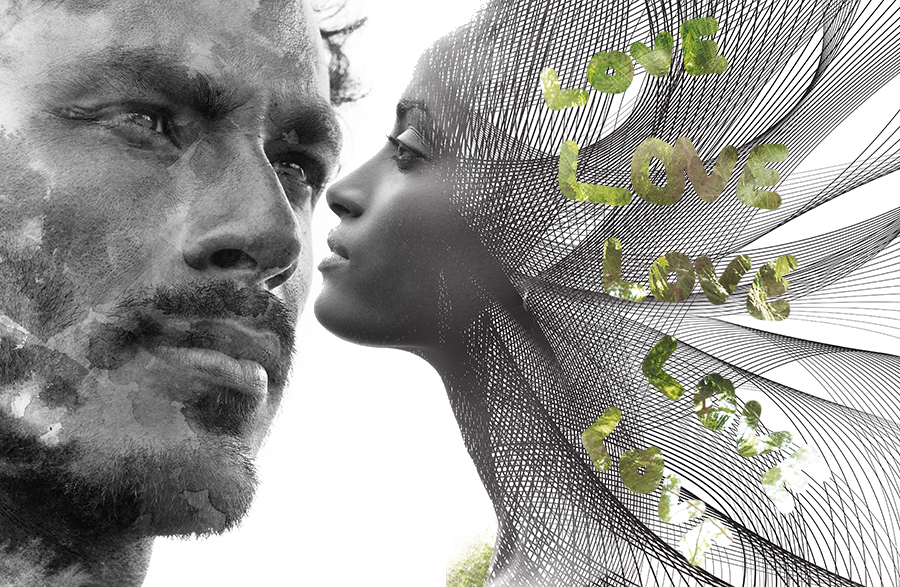 The victim perceives themselves inadequate due to society’s confirmation of the original imprint by the perpetrator: i.e. ‘you are bad’. Victims of mind-control often feel like victims of life but their projections onto the world are portrayed as both victim and perpetrator.

The chase for love is the very thing the perpetrator uses against the child to constantly reel them in and out. This course keeps the child locked into the system, disempowered to their benefit. A disempowered person, let alone a child, will blindly trust (hand their power over to) anything outside of themselves they think can save them. This of course secures the perpetrator so the illusion can continue: round and round in circles we go.

The perpetrator knows this so their aim is never to resolve relations, but rather to strengthen the lies and disillusionment that keeps the child trapped. It is psychic vampirism: no matter what you do, you can never win. The goal is for you to keep dancing around them psychically, and physically, in order to keep feeding off of your energy, i.e. stealing your power, while you remain dizzy. It is a prison for your mind that you cannot see and thus do not know.

The perpetrator’s behaviour indicates their own perceived lack; they too feel like the victim. They are that desperate to believe subconsciously that they cannot cope without feeding off another, even an innocent child. The perpetrator is unable to be or appear vulnerable. They fear this as a loss of power and control. They are absolute control freaks and perfectionists. 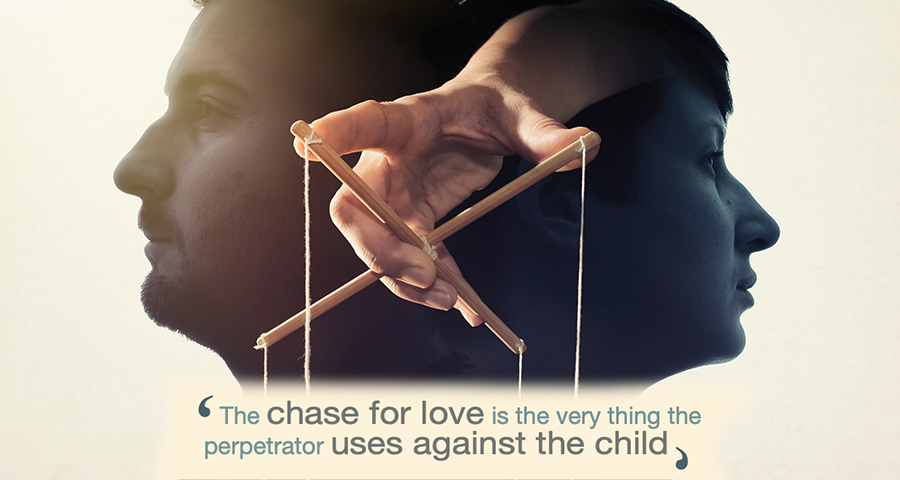 As a child, you are unable to witness this discerningly, and later as an adult, because of the nature of the subconscious mind. The subconscious mind absorbs and records patterns that are extracted as and when needed. The subconscious mind is activated on autopilot for 95 to 97% of the time, which means we are conscious for a very small percentage of our lives. This is why you see the same patterns being repeated throughout the world, adults that to a large extent are still children, mentally speaking, still living in the past. We are still pain producers (filling the world with more pain) and replicating the pattern of pain-healing-pain-healing-pain. May we dismiss the obvious implication to learn from our patterns and choose Love Consciously, as a sustainable alternative? When you are prepared, get out of your ‘your way’; that is where Love starts and suffering ends. Mandela role modelled this beautifully where he rose beyond the victim and perpetrator modality to the presence of forgiveness, co-operation and Love. He inspired the world!

In mind control, the keys to subliminal programming are hidden deep in the unconscious mind, regurgitated through adulthood. Therefore, you are triggered to keep thinking of, and acting out, in ways to somehow save the beast. Yet, you are actually driven to do this as a way of saving yourself: i.e. feeling loveable just for once!

Shame and guilt are triggers which mean ‘I am bad’ and therefore, ‘not deserving of’ which keeps you trying to be better just so you can have one more chance, to prove yourself, so stop being bad, and qualify for receiving genuine love. Shame and guilt keep you working for love because obviously it’s all your fault, even if you were just a child. ‘I am a mistake’ as opposed to ‘I made a mistake’, is imprinted onto the child. You feel a deep sense of shame in the world and deny yourself of life and your own existence.

The success ratio of psychic vampirism is largely dependent upon the perpetrator’s ability to instil fear in their victims inclusively.

We think fear is an innate quality, for our own protection, but I beg to differ. A notion that humans by their nature act in ways to either avoid pain, or go for pleasure, is an enticement of fear. If as a child you are not introduced to fear, you will observe life as a witnessing presence and respond to stimulus consciously.

For example, if a sabre tooth tiger is placed in front of a baby, it won’t know the danger. It is the parent’s fear that is projected onto the baby that makes it their own. Thus fear is learned. Should the parent display consciousness by virtue of observation, the child can learn that too. It is not fear that protects us from the tiger, it is our ability to discern, a quality of consciousness.

Fear overrides cognitive ability. Consciousness is clarity in the here and now, appropriating circumstances by virtue of response to sensory stimuli. Consciousness is the ability to see life as it is, not as you perceive it to be. 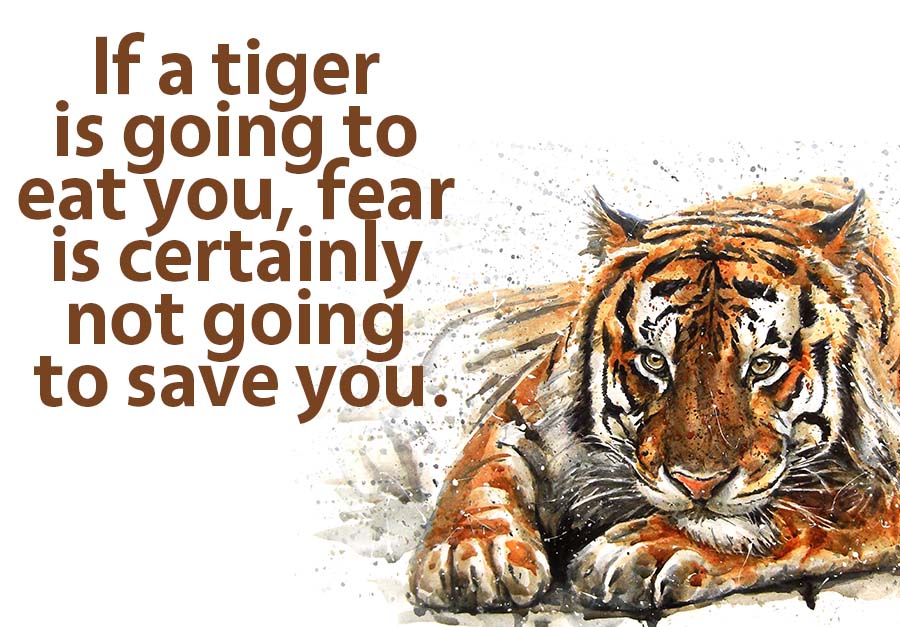 Fear is learned and amplified by certain operating systems in our society, that are led by psychic predators throughout the ages, known as the illuminati. Fear is psychic vampirism used to steal energy, thus you have control and bigotry. Fear is a programming of the mind, it is unnatural. Find out how to and take responsibility to release your own fear. That way this irrational programme will not be downloaded onto your children. Consciousness is like antivirus software that helps you unlearn fear, relearn and upgrade to Love. Without a substitute, i.e. Love, we will keep reverting to what we know, and that is fear.

Victims of mind control are yet to confront their fears. An inner revolution of consciousness ought to take place, an exorcism of the Soul and cleaning out the psyche. This courageous act of self-responsibility to face one’s fears, causes cumulative changes within the perpetrator by default, thus causing collective transformation. When I change myself, I change the world, because it affects the entire wave-length; i.e. ‘Love thy neighbour as thyself.’

It takes someone brave enough and willing enough to look deeper, within, to discover and flush the monster out and away for good.

To some extent setting up boundaries metabolises mind control and disempowerment. It is caring enough about yourself to be happy, taking responsibility, and not blaming others. We think our children mimic our habits biologically, but that is only partially true. It is largely due to our own negative programming, or baggage, that we infect them. 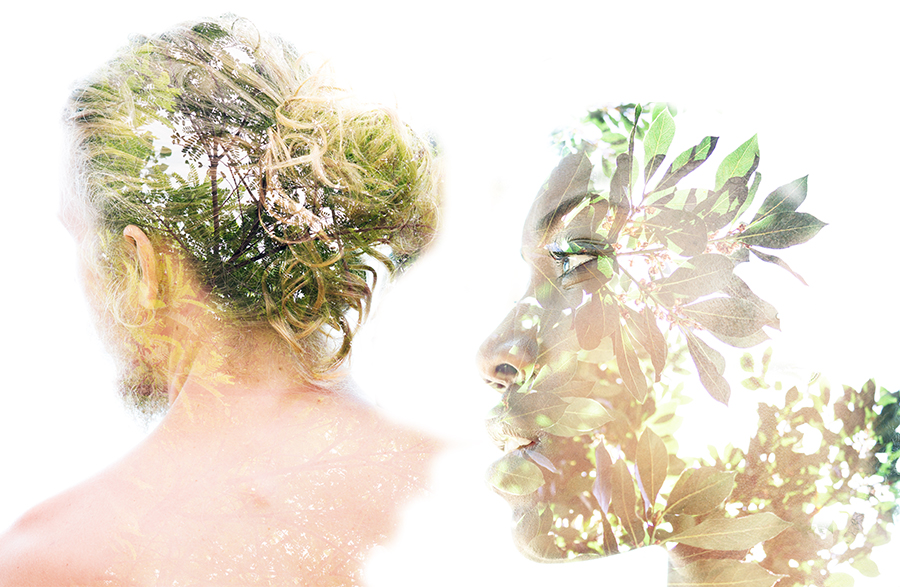 About the Author: Lisa Ann Catano

Lisa Ann Catano also known as ONATAH is an Entrepreneur of Divine Providence. A Spiritual Life Coach/ Writer, she works solely with the Subconscious Mind to help people overcome the programs that limit their full potential and Abundance. Her work is pro bono and she is looking to be supported in her calling that is to manifest a world without money. This is based on the natural principles of uncompromised abundance, giving and receiving in Love consciousness as opposed to fear and shortage/ lack mentality. Based in Johannesburg, to get in touch with ONATAH to support her vocation and forward thinking, please email or contact her directly. 3onatah@gmail.com, 062 869 1100, website: https://onatahlifecoaching.co.za/
Toggle Sliding Bar Area
Go to Top