Chocolate – for the love of it 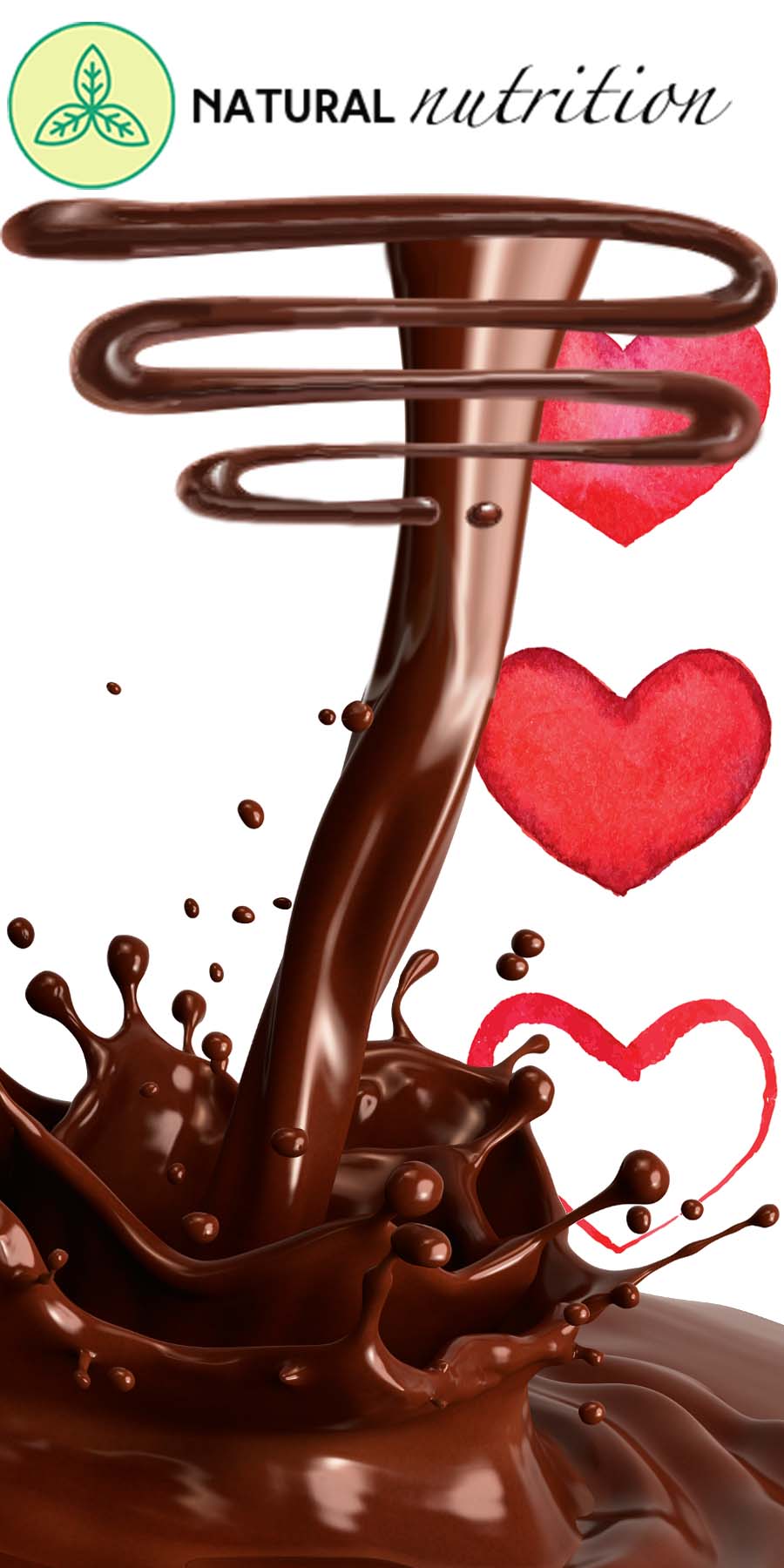 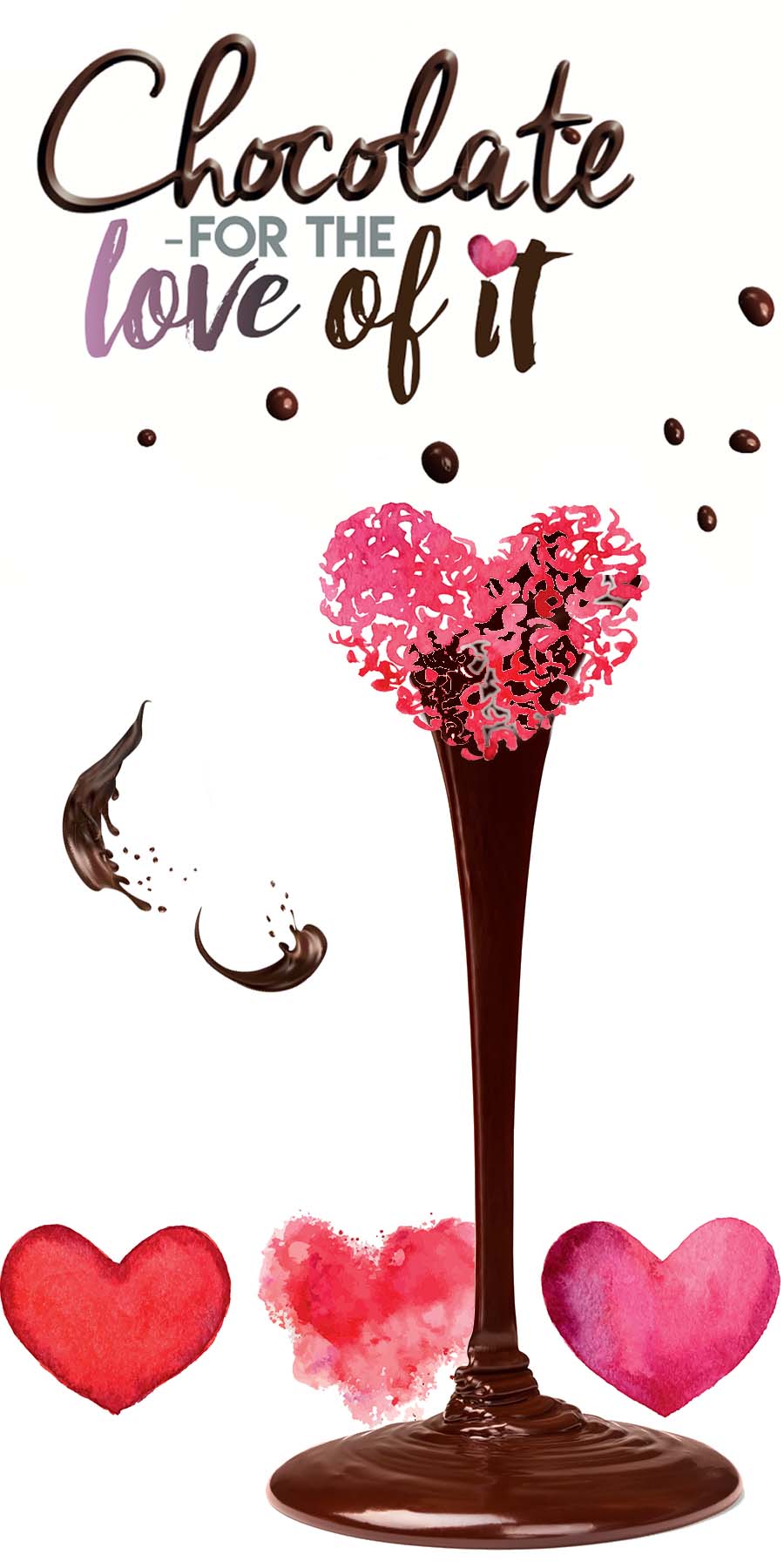 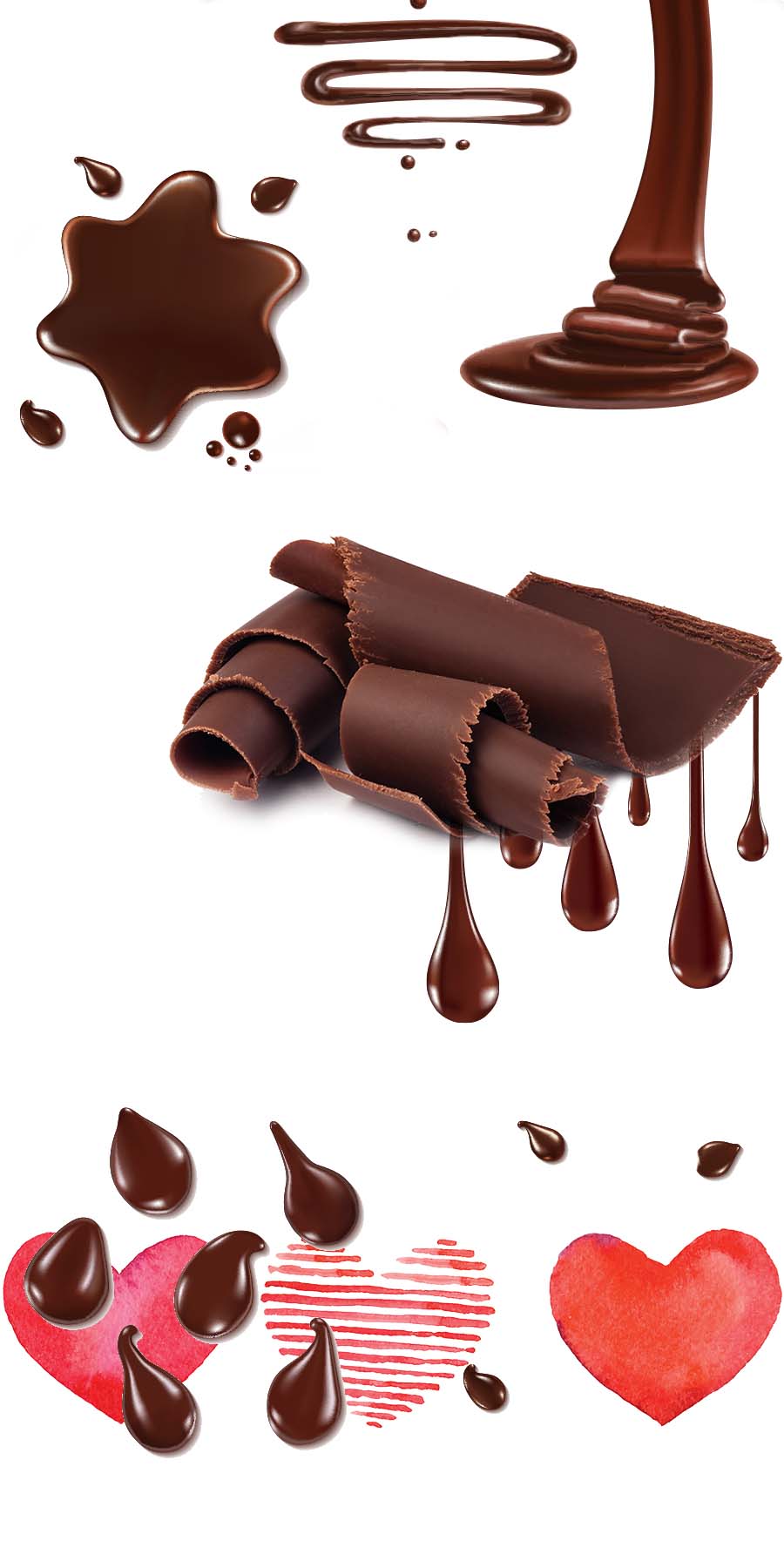 Some people think chocolate is in its own separate food group. I personally think, as do many others, that it is an ‘essential’ superfood and that life would just not be the same without it.

Chocolate, derived from cocoa beans, has a long and interesting history. The word cacao has changed over the years to cocoa, and was taken originally from the Mayan and Aztec languages.

There are three main kinds of cocoa trees grown throughout the world, each with their own flavour, profiles and growth characteristics. There are also hundreds of different hybrids. Most cocoa trees are grown in areas between the tropics of Cancer and Capricorn – mainly in South America and West Africa. 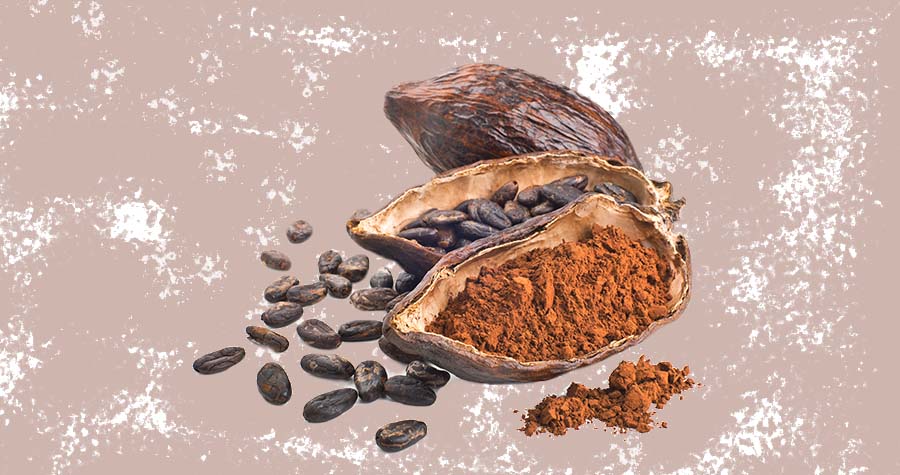 FROM BEAN TO BAR

After harvesting, the beans and surrounding pulp are scooped out of the pods and left to ferment for up to six days. – a critical step for flavour. During this process the colour changes from purple to brown and the familiar cocoa smell emerges. The beans are then dried naturally for between 10 to 20 days after which they leave the cocoa plantations in this dry but raw state with the edible part still enclosed inside a hard skin. They are then bought by factories around the world.

Manufacturers have their own methods of roasting the beans to develop flavour, aroma and enrich the colour. The husks are removed after roasting and the beans are passed into the grinding mill. The final flavour is obtained by blending two, three or more types of bean after roasting. The formulas for these blends are jealously guarded secrets.

Pulverised sugar or artificial sweeteners, cocoa butter, and very small amounts of soy lecithin and vanilla are then added to this cocoa mass (also milk powder for milk chocolate) and thoroughly mixed on a melangeur (chocolate grinder) to form a dough-like consistency. The chocolate paste is refined by further grinding and then goes through the conching process.

Conching is the process whereby the chocolate is gently agitated over a period of up to seven days. During this stage the flavour of the chocolate is developed and mellowed, removing any residual bitterness, and the texture reaches that essential stage of velvety smoothness. Various flavours are added.

Finally, the chocolate is returned to a liquid form by raising the temperature to 45°C in a process called tempering.

A chocolate maker starts with the raw product (cocoa beans) and transforms them into chocolate for eating or use in baking, or in some cases uses the raw cocoa beans themselves. Many chocolate companies buy ready-made chocolate/cocoa liquor to use as a basis and then add flavourings and other ingredients such as nuts. It is then ready to be moulded into bars and chocolates.

In general, the more additions to the original raw cocoa mass, the less healthy the chocolate becomes. 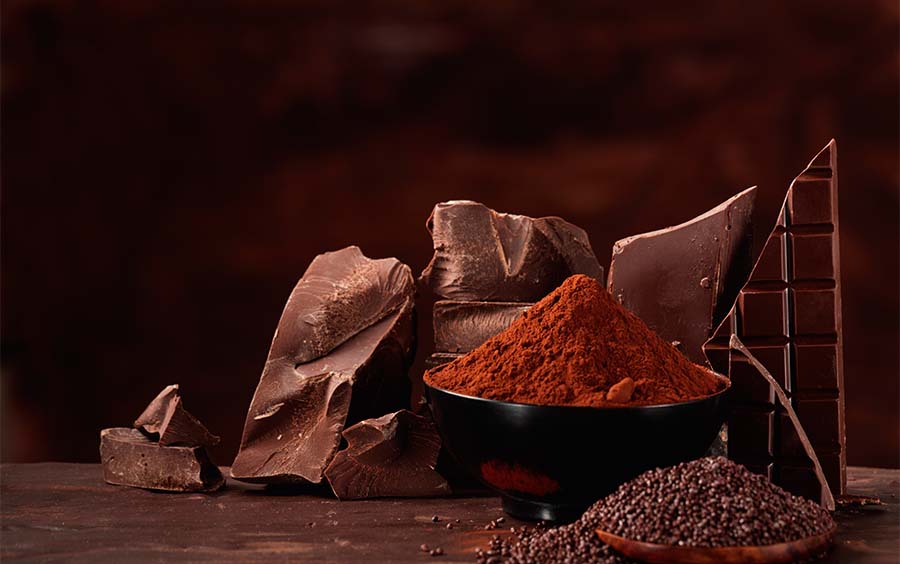 Chocolate contains beneficial chemicals known as polyphenols, i.e. potent antioxidants. Antioxidants neutralise free radicals (oxidants) which can accelerate cellular damage and ageing and their related health problems, but the more processing the raw cocoa undergoes, the fewer of these are present.¹

Several studies have shown that flavanols in cocoa beans increase nitric oxide (NO) production, which in turn reduces tension in blood vessels and improves bloodflow.²,³

A similar 2012 study5 found that adults who eat a modest amount of chocolate on a regular basis had a lower BMI than those who did not. The chocolate eaters did not eat fewer calories or exercise more and no behavioural differences were noted. The researchers suggest that it may have something to do with ‘the composition of the calories, and not just the number of them’ that impacts on one’s weight. It was a small study but further studies of chocolate’s metabolic benefits in humans are definitely warranted.

C-reactive protein (CRP), a marker for inflammation, decreases with moderate dark chocolate consumption. Abnormal CRP levels can mean many things, including conditions ranging from tuberculosis to a heart attack. The study suggests that the serum CRP-lowering effects of dark chocolate disappear with the consumption of more than 6.7 g/day, which is approximately one block of a slab, dependent on the thickness of the slab. Di Giuseppe suggests that this is why two small studies that previously attempted to prove that dark chocolate decreased inflammation failed to get the proposed result.4

A 2013 study7 done on cocoa’s effects on the cognitive function of elderly adults gave promising results. Participants with cognitive impairment (namely dementia) prior to commencement of the experiment had significantly improved blood flow to the brain after the study. This resulted in them scoring higher on working memory tests after 30 days of consuming cocoa beverages. Those who had no previous cognitive impairment showed no difference in their test scores after the completion of the experiment.

The consumption of chocolate is said to improve one’s mood and increase feelings of pleasure by increasing the levels of serotonin8 and endorphins in the brain.9 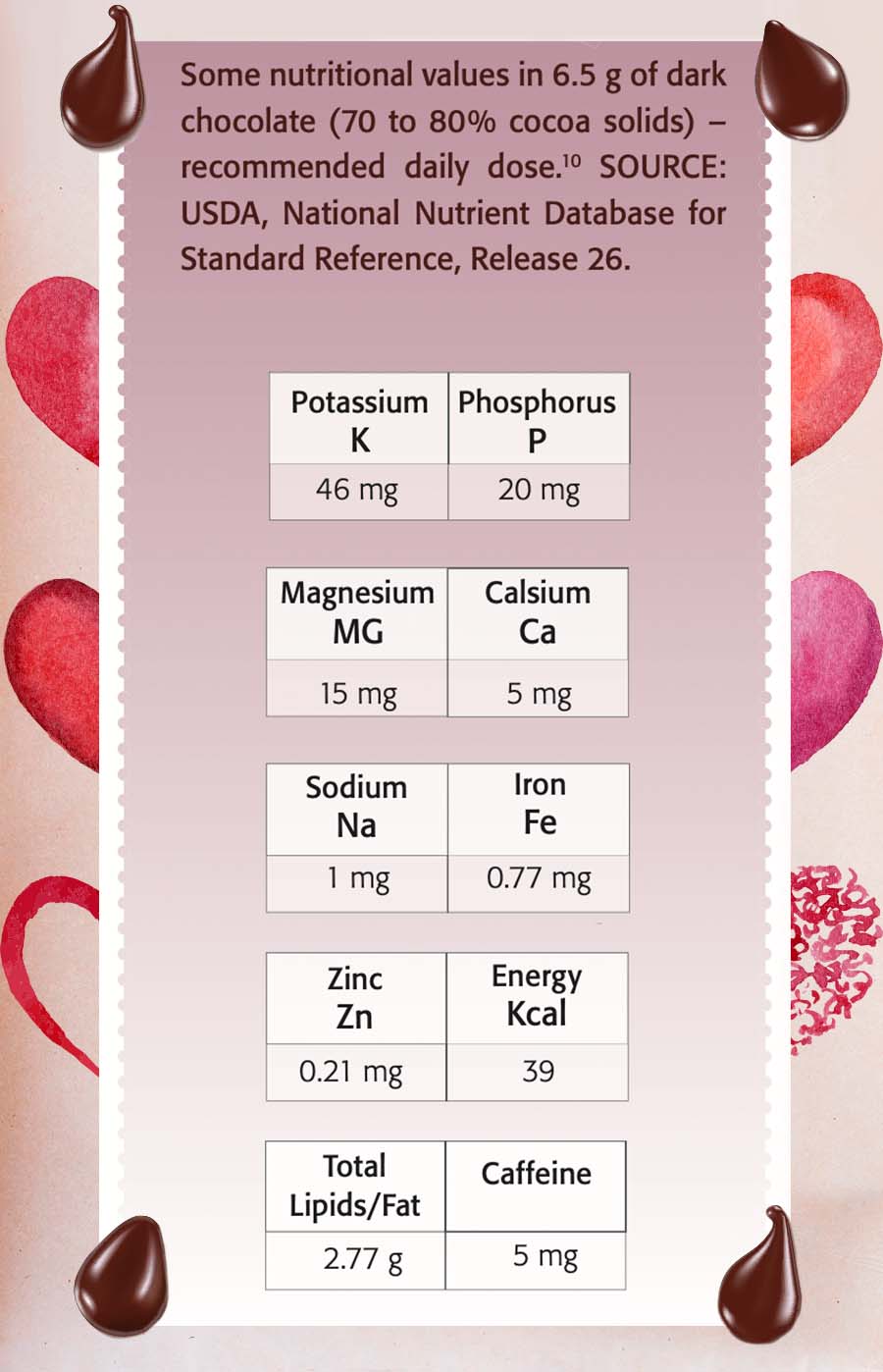 Further investigation is needed to support the findings and hypotheses made on the health benefits of dark chocolate. These studies should include researching the long-term effects, optimal doses and dietary influence on people of different ages and demographics.

Dark chocolate or raw cocoa can be a great form of nourishment, and is regarded as a superfood, BUT as long as it is added to a balanced diet. As with everything in life: Enjoy! 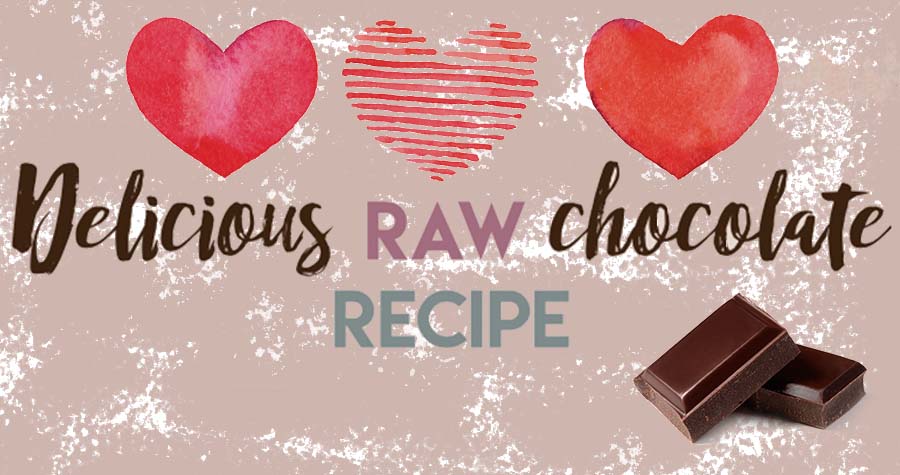 A dear friend, Becky Hastings, an avid raw chocolate lover and ‘experimenter’, has kindly shared a favourite recipe with us.

Raw chocolate is something you can experiment with. It is really tasty, and good for you. Raw cacao powder is loaded with minerals and has an outrageously high ORAC* score. Coconut oil is a healthy fat which provides more benefits than I can explain!

Just make it – and eat it and enjoy!

IN A SMALL SAUCEPAN COMBINE, AND MELT SLOWLY ON THE LOWEST HEAT POSSIBLE

(OR YOU CAN USE A DOUBLE BOILER):

BLEND IN A BLENDER OR FINELY CHOP AND ADD TO THE ABOVE MIXTURE WHEN IT IS FULLY MELTED:

Stir together and put into silicon chocolate moulds, a glass dish, or BPA-free plastic containers. Put into the freezer until hard. You can keep the chocolate in the refrigerator or the freezer, cut into pieces as needed. Raw chocolate melts easily, so don’t hold it in your hands for long.

If you don’t have any cacao butter, goji berries, cacao beans or hemp, just leave it out! Don’t allow ‘not having all the ingredients’ keep you from experimenting with delicious raw chocolate. I add these superfoods to boost the nutritional value. If you do leave them out, you might need to add more cacao powder. You can vary the type and quantity of nuts depending on what you enjoy. In fact, you can vary just about everything!

About the Author: Dr Adele Pelteret

Dr Adele Pelteret is a qualified Naturopath, Nutritional Therapist, Teacher, and Functional Medicine Lifestyle Consultant with BSc degrees in both Complementary Medicine and Naturopathy. She practises in Pinelands, Cape Town, where she uses an individualised approach to diagnose and treat patients. She is the National Secretary for the SA Naturopathy Association, and has a special interest in physical therapies, ergonomics, epigenetics, public speaking, and corporate wellness.
Toggle Sliding Bar Area
Page load link
Go to Top