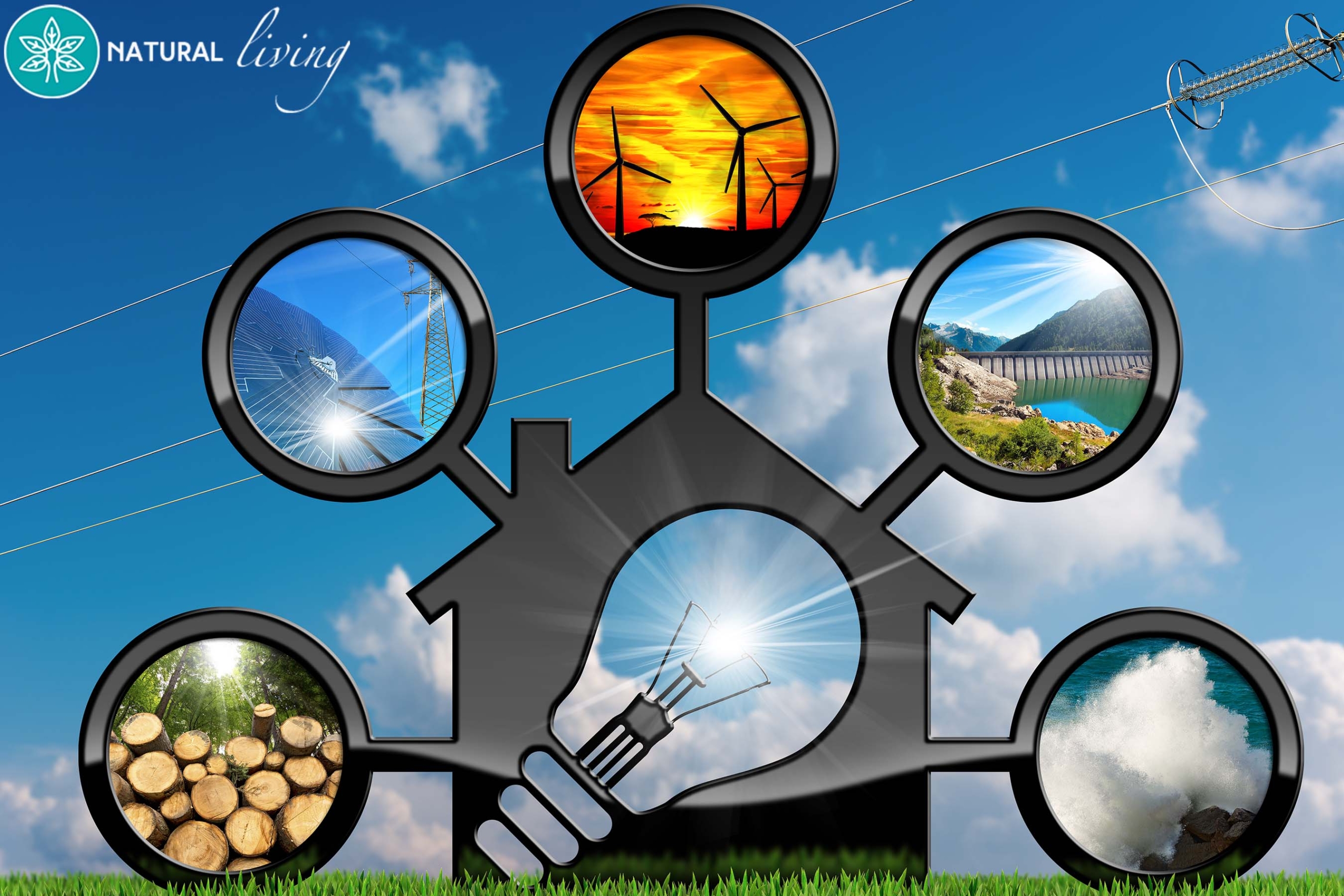 Solar energy has gained tremendous popularity during the past few years and there has been a strong focus on renewable energy sources worldwide. The sun is not only renewable, but also a constant. It is a gift that has been bestowed upon us and can be a solution to many of the problems associated with the way we generate energy.

Non-renewable resources speak for themselves. They are not sustainable and have a negative impact on environment. The costs associated with electricity have become a problem and in the end we are investing in resources that will fail to provide for us in the long run. Fossil fuels cannot be replenished in a short period of time. Although they are abundant and affordable, they do contribute to global warming, photochemical pollution and acid rain. Considering the effect that these resources have, why do we continue to use them? What if there was a better alternative? The good news is that there is, if we would only look up.

THE BENEFITS OF GOING SOLAR

Solar energy is clean, low maintenance and does not affect the environment in any negative way. It is better than hydroelectric and wind power, because it is constantly and freely available. The sun will always shine, never being unpredictable. It is our constant in the sky. Solar power even works on cloudy and rainy days, having stored excess energy in the batteries of photovoltaic (PV) systems and it will save you money.

Misconception has damaged the South African solar power industry. The solar project that was linked to the Reconstruction and Development Program (RDP) housing gave a bad name to solar water heating specifically. This government failure caused the industry to take a big knock. A large percentage of the solar water heaters that were installed during this project were only installed, but does not work. The project abruptly ended in 2012 and the installation target was never reached.

This was what happened in the lower income sector, but the middle class citizens that were offered a part in this project did not do much better with only 60 000 units installed country wide. They simply could not afford to pay for high pressure systems, which is the most common water system used in South Africa. Monopolistic Eskom is currently supplying our power and solar water heating systems are clearly a threat. This is why not much was mentioned about the failure of this project. Eskom still holds all the power.

Some of the solar installation companies involved in the project only saw an opportunity to make money and did not focus on the relevance of installing these units. Installers usually do not share actual information with consumers. They usually try to convince buyers that the biggest and most expensive systems are the best. Some do not even take into account how many people are living in the house.

They do not ask whether you shower or bath and how often each family member does so. They do not calculate whether you will generate savings if you install the unit.

Our sunny South Africa has tremendous potential for effective solar-generated energy. Our clear skies and ideal climate ensures an abundance of solar energy. Our country can show a significant difference in our carbon footprint if solar energy was to be implemented in a more successful manner.

The Northern Cape has already proven itself as the hotspot with the Bokpoort Concentrated Solar Power plant in Groblershoop at the forefront. The solar plant is fully operational after its construction was completed in December 2015. More projects such as these will be launching in the Northern Cape with the help of international investors. The power generated here supplies the surrounds with energy.

South Africa clearly has the potential to become a leading country in using solar power with above-average potential to generate carbon credits.

Install a Solar Water Heater in your home

Solar heating is considered as the first step towards going solar. It is the most affordable and the easiest way to start the transition. Your geyser uses the most electricity and makes up for around 55% of your electricity bill.

Thankfully, a new initiative has emerged as a solution. Pay as you go solar water heating systems allow you to rent a solar water heater. The rent of the unit would ideally replace your electricity bill. The unit retro fits to your geyser can be transferred if you move and will make no permanent changes to your existing geyser.

Install LED lighting in your home

LED lighting is affordable, long lasting and uses minimal electricity. Although lighting does not use that much energy, it can aid electricity savings together with your installed solar water heater.

Install a Solar PV system in your home

A solar PV system has the potential to run your entire household on solar generated energy. Solar Photovoltaic cells are currently very expensive in South Africa, but this would ideally be the next step in going fully solar. Large solar panels are usually fitted to the roof and are attached to batteries that store excess energy for later use. These batteries are very expensive to maintain and replace, which is one of the reasons why these systems are so highly priced.

Smaller industries like guesthouses and hotels can install heat pumps, which switch on and off during hot water rushes in the mornings and afternoons when most guests shower. This will help generate electricity savings during the periods where there is a high demand. 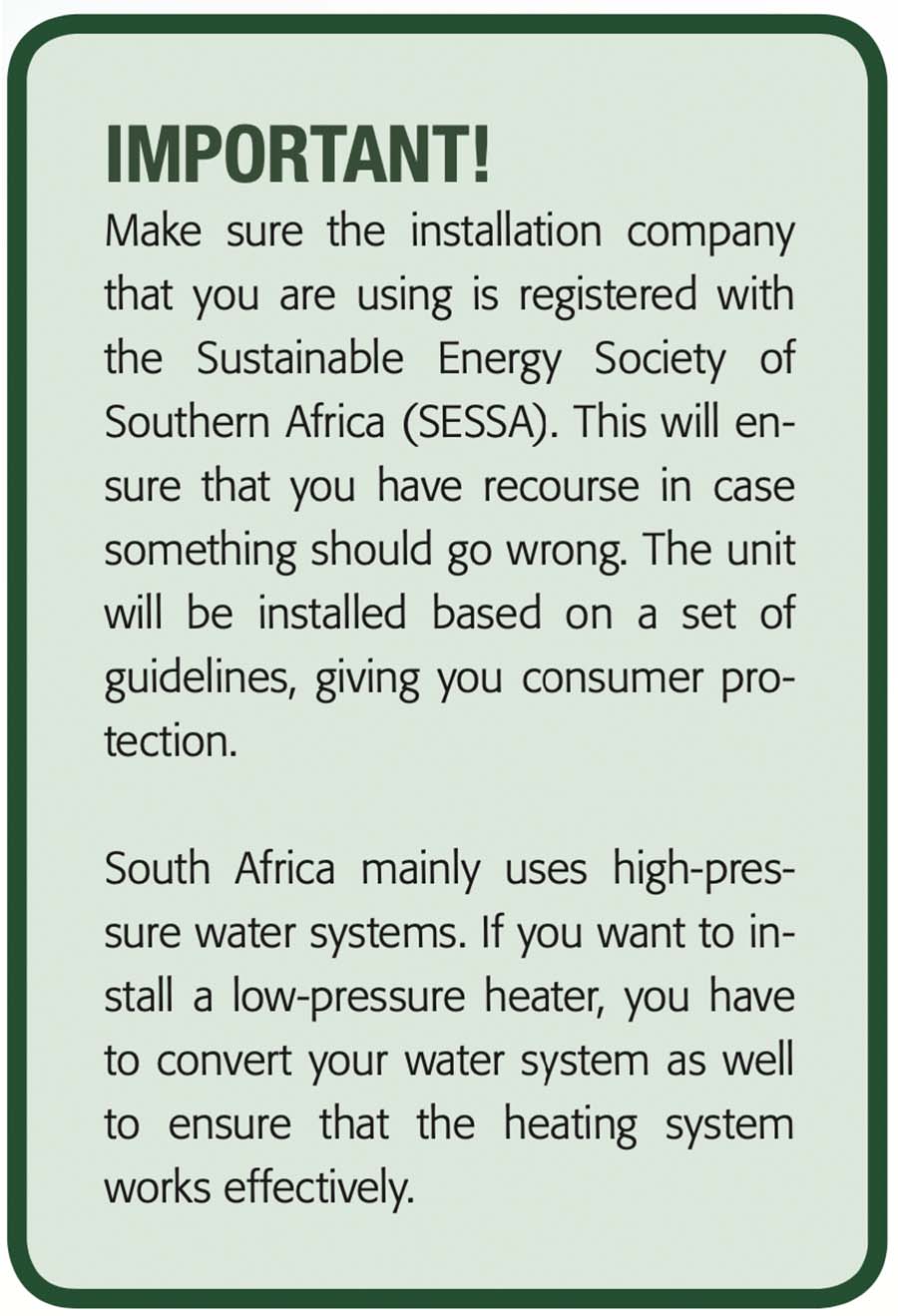 THE FUTURE OF SOLAR ENERGY IN SOUTH AFRICA

Focusing on carbon emission reductions should become the focus of every South African citizen. Other countries have taken the lead in developing systems that will increase their carbon credits, like installing solar panels in their road surfaces. Our country has high potential to be successful with ideas like these, but we must first start doing what we can with what we have. Individuals starting in their homes and expanding into other areas, like businesses and schools, will ultimately ensure the success of systems like these. We do not need to wait for investors to create the change, because affordable systems have been developed to help us do it by ourselves. All we have to do is take the first step.

About the Author: Jasmari Ferreira

Jasmari Ferreira is the founder and director of Falcon and Wolf, an eco-friendly and slow fashion clothing company based in Cape Town. Her products are manufactured from hemp and organic cotton exclusively. She has a Bachelor of Consumer Science degree and is committed to educating consumers on their rights and the impact that their buying choices have on the environment.
Toggle Sliding Bar Area
Page load link
Go to Top