Got to love Lentils 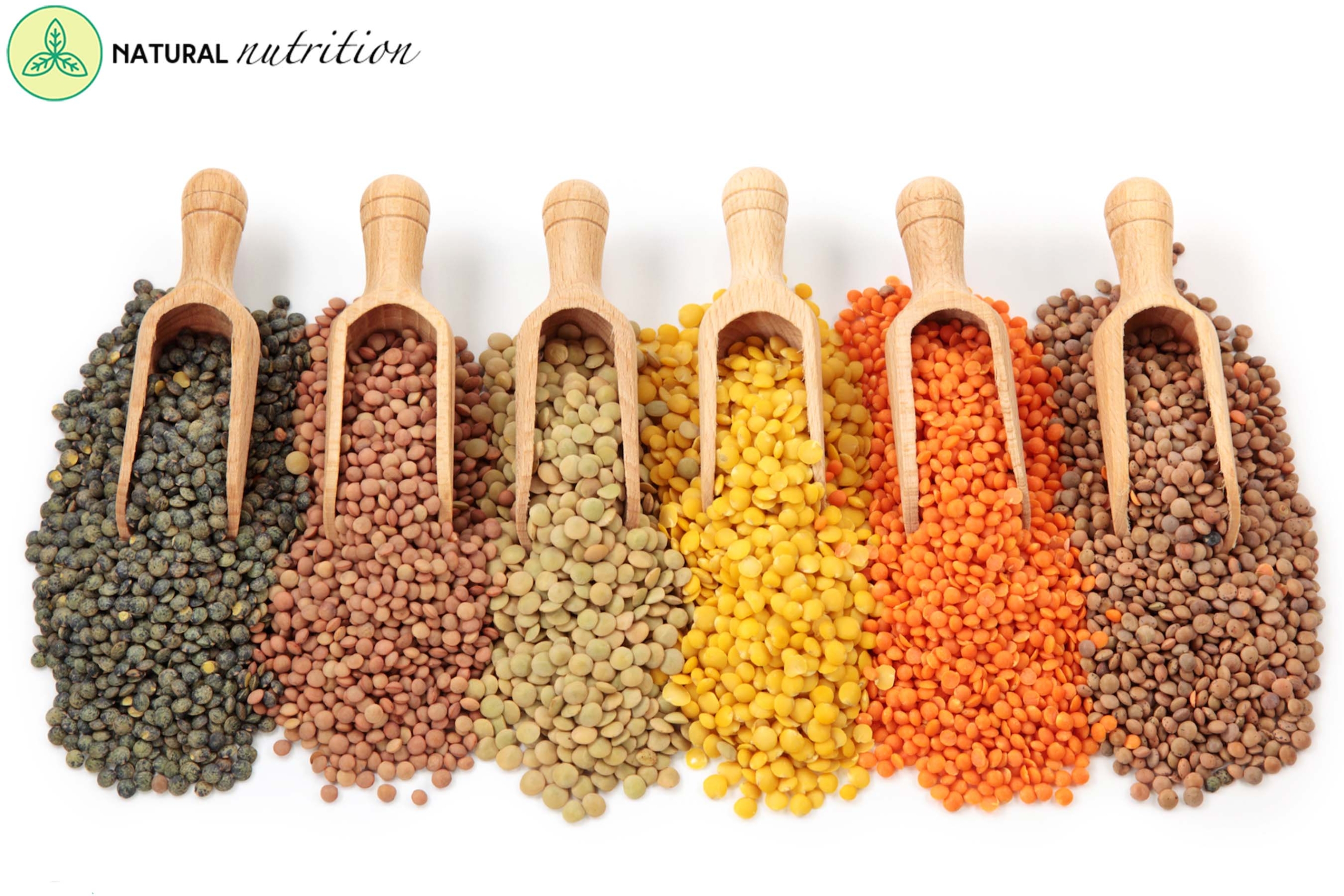 Lentils are a most versatile and inexpensive food, and so easy to prepare. Low in calories and fat, cholesterol free and a rich source of iron, protein, vitamins, minerals and soluble fibre, they are also one of the healthiest foods in the world.

The lentil plant (Lens culinaris), part of the plant family of peas, is native to south-western Asia and is one of the oldest cultivated legumes. Lentils are used in countless cuisines worldwide and are a staple in many Asian countries.

Lentil plants are cultivated for their seeds, which are dried to be cooked or ground into flour. From a nutritional and health perspective, lentils are extremely nutritious as an unprocessed whole food. Lentils are naturally rich in protein, dietary fibre, vitamins, minerals and trace elements. Apart from the fact that they are extremely nutritious, they are also extremely versatile from a culinary perspective – just see the variety of recipes below!

Although there are basically two types of lentils, the larger macrosperma and the smaller Persian microsperma, there are many varieties within these two groups, including the well-known brown, red, green and black lentils.

Why is this important?

HOW TO PREPARE LENTILS

Most dried pulses need to be soaked in water overnight before they are cooked. The same can be done with lentils, as this would reduce cooking time to 10 – 15 minutes. However, pre-soaking is not essential. Lentils should be boiled by adding three parts cold water to one part lentils. Bring to a boil, then reduce the heat and allow them to simmer until the desired texture is achieved.

Cooking time differs slightly for the different types of lentils:

Should salt be added?

Ideally salt should not be added during the cooking process, as this may prolong the cooking time as well as affect the texture of the lentils. Adding salt results in the skins becoming tough, and sometimes the lentils stay quite firm.

Add two celery stalks, half an onion and one carrot when boiling lentils. This adds a lovely flavour without affecting the texture of the lentils.

Even though one of the general rules for good nutrition is to stay away from processed and tinned foods, an exception can be made for pulses, including lentils. Since the cooking process takes a long time, vitamins that are sensitive to heat and processing will be reduced to the same extent through cooking as through processing to be tinned. The main nutrients in lentils are in any case resistant to heat, which means that the cooking process does not greatly compromise their nutritional value. However, it is still best to cook your own lentils. 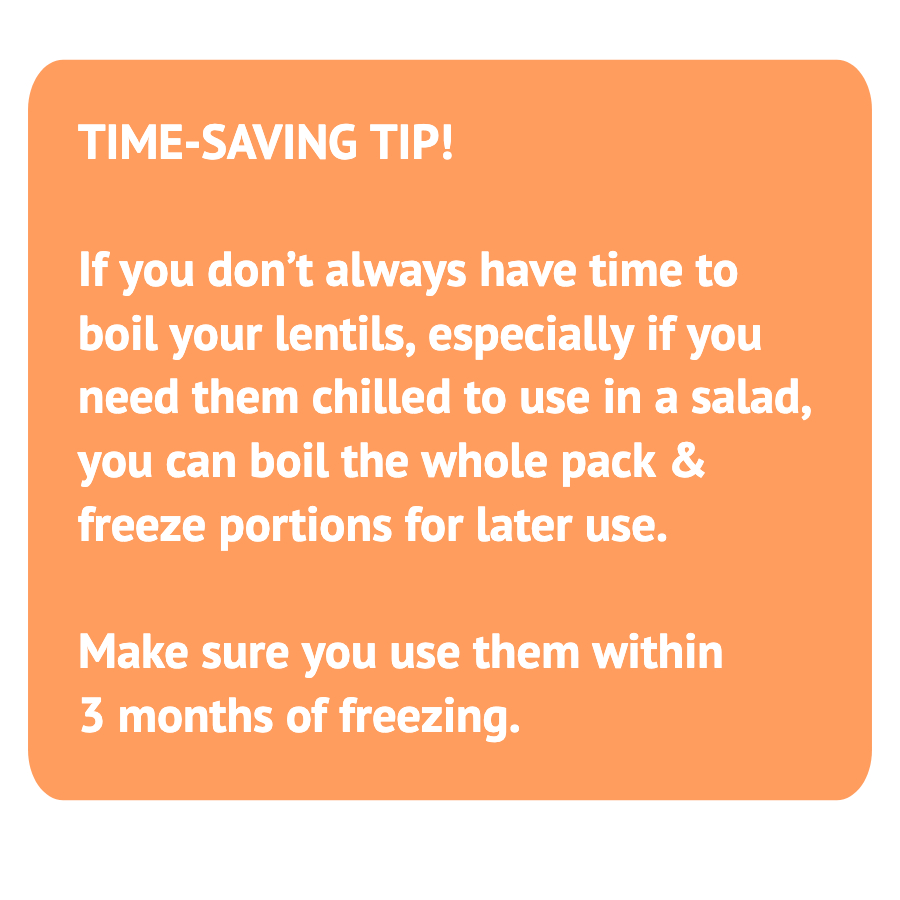 Lentils are the ideal base for a variety of stews and soups, but can also be added to any salad or stir-fry vegetable recipe to add flavour, texture and protein.

Combine all the ingredients. Refrigerate. Serve with honey and mustard salad dressing.

Combine all the ingredients in a blender and use as a dip with celery sticks, cucumber slices, rice cakes or corn cakes. The mixture can safely be kept in the fridge for 7 – 10 days.

Place half a pack of red lentils in a pot. Add double the quantity water. Bring to a boil, and boil for approximately 20 minutes until the lentils are soft. You’ll have to add some more water throughout – don’t let it boil dry. Add the tin of Mexican tomatoes and cook for another 10 minutes. If you want to thicken the soup add another half a tin of tomato, or if you want a thinner soup, add more water. Cook until the lentils are very soft, add salt and serve. You can add some garlic and a bay leaf to enhance the flavour.

Slice butternut in half (lengthwise), remove pips and brush with 1 teaspoon olive oil. Bake in preheated oven at 180°C for about 40 minutes until still firm, but almost cooked. Remove from oven and remove most of the flesh without damaging the skin. In a shallow non-stick pan, fry onion in remaining olive oil. Add mushrooms and chopped butternut when onions are golden brown. Add garlic, spices, salt and pepper. Add ±100 ml water, turn down heat and simmer until butternut pieces are soft. Add cooked lentils and simmer for another 10 minutes. Spoon mixture back into butternut skins. Heat filled butternut in oven. Serve with a dollop of plain low-fat yoghurt and garnish with fresh coriander leaves.

About the Author: Andrea du Plessis

ANDREA DU PLESSIS, BSC DIETETICS, MPHIL EXERCISE SCIENCE, is a registered dietician. Following her initial career as a consulting dietitian, she furthered her studies in the field of sports nutrition with a Master’s degree in Sports Science. As nutrition expert, she has a passion for healthcare through nutrition, natural remedies and an active lifestyle.
Toggle Sliding Bar Area
Page load link
Go to Top