Imhotep – ‘one who comes in peace’ 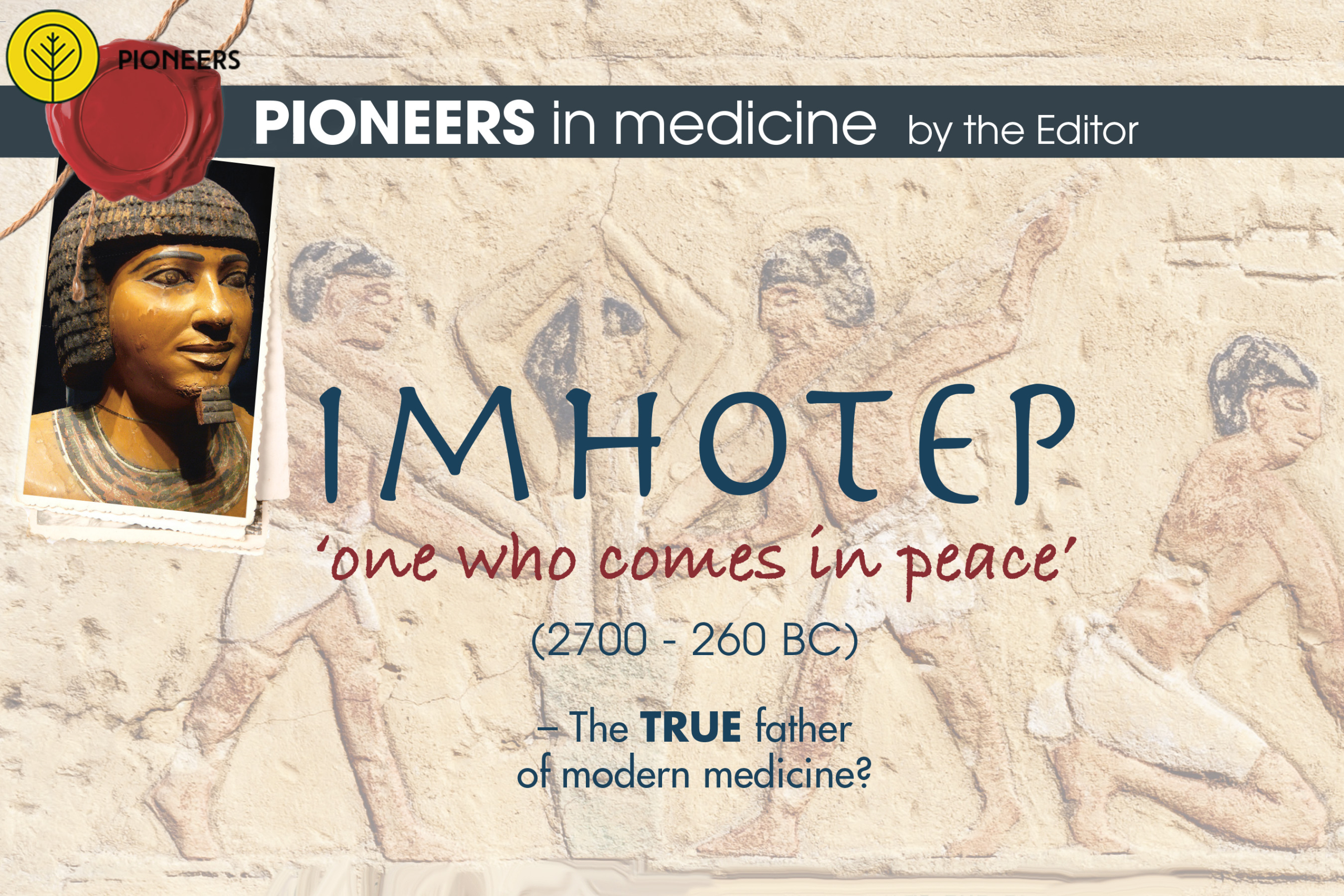 The true father of modern medicine? Apart from Hesy-Ra and Merit-Ptah, Imhotep was one of the first known physicians in early history. Historians call him the world’s original genius.

He was also a priest, astronomer and the architect of the Step Pyramid of pharaoh Djoser of the 3rd Dynasty. The Step Pyramid was the first structure created by human hands to be built entirely from stone. Was it Imhotep’s genius behind the great pyramid of Cheops, whose architect and secret of construction remain unknown?

Two thousand years after his death, Imhotep was recognised for his earthly achievements and elevated to the status of a god – a rare honour to bestow upon a common man. He may have applied what he learned during mummification of the dead to healing the living. During mummification, the internal organs are removed, which may be how Imhotep learned the positions and functions of the organs.

THE BIRTH OF MEDICINE AND THE ORIGIN OF MUMMIES

In 1990, near the Great Pyramids, archeologists unearthed the complex where the workers who built the great pyramids were housed and buried. A nearby lab examined the bones and x-rayed them. A big surprise was that many of the injuries suffered by the builders had been treated successfully. Evidence showed broken bones set in splints, and the end of a bone that was well healed after successful amputation of the lower leg. One skull was unearthed that had clear evidence of chiseling to relieve the pressure caused by a brain tumor. Is it possible that Imhotep performed the first brain surgery? Was this site the world’s first trauma centre?

IMHOTEPIC INSTEAD OF THE HIPPOCRATIC OATH?

Imhotep who lived 2000 years before Hippocrates was practising modern medical techniques. His early written work, called the Edwin Smith papyrus, contains anatomical observations, ailments and cures for 48 cases. Imhotep may have authored the world’s first medical work. In fact, he was the first person known to use the papyrus scroll and may have even invented it! He extracted medicine from plants and miraculous cures were often attributed to him. He made use of honey, a natural antibacterial, as the chief ingredient in the treatment of wounds.

He was known as a humble man, never covered with jewels or self-seeking. The Greeks identified him with Asclepius, their god of medicine and healing.

Egyptologist Professor Dietrich Wildung said in his academic survey that the statues of Imhotep confirm the confidence and reverence felt for him. Imhotep would intervene for anyone with a simple prayer and communicate the answer by dreams.

Some original texts on the teachings of Imhotep have disappeared, but in tombs dating from 2000 BC, the substance of Imhotep’s message remains captured in the paintings.

ARE JOSEPH AND IMHOTEP ONE AND THE SAME PERSON?

While searching for more information on his life, I came across a very interesting correlation between Imhotep and the biblical Joseph. There is evidence that they were one and the same person!

Scholars suggest that Djoser is indeed Joseph’s pharaoh, and that Imhotep is responsible for the oldest grain silos in Egypt – as found in the Step Pyramid designed by him. Now remember that it was Joseph who suggested to store grain after he interpreted the Pharaohs’ dream of seven years of abundance followed by seven years of famine. They both died at the age of 110 years and were given royal Egyptian burials. Moses took Joseph’s bones to the Promised Land at the time of the Exodus – could this be why Imhotep’s tomb was never discovered?

For more on Imhotep and the history of TIBB medicine, read the article by Prof Rashid Bhikha An Introduction to Tibb – a system of medicine with a rich history