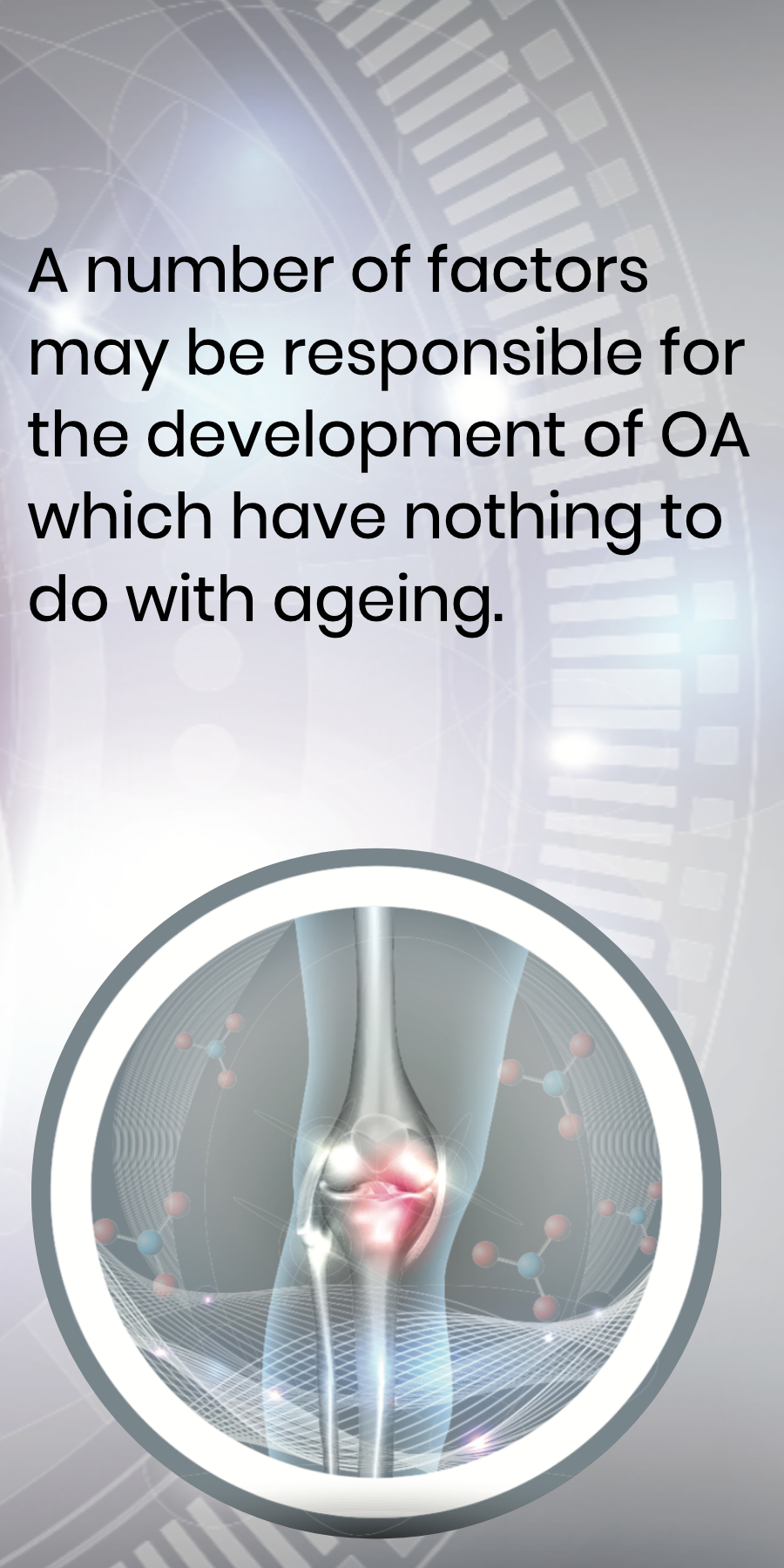 Osteoarthritis (OA) has long been regarded as a degenerative disease, a natural consequence of getting old, but more recent research is suggesting another story.

Clearly ageing has something to do with the onset of OA but the story, like all of medicine, can be considered in much more holistic and broader terms. When the bigger picture is considered, then suddenly the possibilities of prevention become a real possibility and new ways of dealing with this most ancient of illnesses also become apparent.

Osteoarthritis generally involves the larger weight-bearing joints such as the knee, hips and spine. It is primarily a disorder of the cartilage and the adjacent bone although all the tissues in and around the joints become involved with inflammatory changes adding to the swelling, pain and stiffness. OA is one of the leading causes of disability in the elderly.

It is usually differentiated from other forms of arthritis, especially the rheumatic conditions such as rheumatoid arthritis, ankylosing spondylitis, gout and certain other endocrine and metabolic conditions which may be associated with arthritis and should be excluded. The Europeans call the condition osteoarthrosis rather than osteoarthritis and there is some sense in this as it is a non-inflammatory disease in its early stages. The onset is subtle and gradual with degenerative changes slowly occurring in various joints especially the larger weightbearing joints.

X-ray changes without symptoms are common and this is a major cause of confusion and sometimes manipulation by doctors. Arthritic changes can often be seen in many joints in the elderly yet cause almost no pain and little discomfort Epidemiological surveys show that 50% of patients with X-ray findings of OA have no symptoms. If a joint does have pain and there are arthritic changes surgery may often be recommended without warning the patient that these changes may in fact not be the cause of the pain. This often accounts for surgical failures and unsatisfied clients. Clearly OA is only one cause of joint pain but any of the surrounding soft tissue may also be involved in pain syndromes due to tears, inflammation and other injuries.

A number of factors may be responsible for the development of OA which have nothing to do with ageing.

Overweight people have a greater incidence of arthritis of the knee. Obese women are four to five times more likely to develop arthritis of the knees than women of average weight and they will have a greater risk of disease progression. Some studies have shown that decreasing weight reduces the risk of OA by as much as 50%.1 For every one pound in weight increase, the overall force across the knee in a single leg stance increases two to three pounds.

There are a range of complex and confusing factors around the role of sex hormones especially in women. After the age of 50 years OA is more frequent in women and while earlier studies suggested that taking oestrogens decreased the chance of getting OA, this is no longer so clear from more recent studies. Long exposure to both endogenous and exogenous oestrogens appears to be linked to high bone mass or density and high bone mass is linked to a higher incidence of OA. So oestrogen is both protective and increases bone density which seems to be associated with increased incidence of OA. A paradox which is confusing and probably suggests an individual response and conflicting roles of oestrogen in different women.2,3

Evidence indicates that continuous exposure to free radicals contributes to many chronic diseases including OA. Antioxidants appear to be protective. Free radicals are produced by poor life style habits, processed foods, stress and many environmental factors. Free radicals can be controlled by the use of antioxidants. There is in fact some evidence that nutritional factors do make a difference and can be used to treat osteoarthritis. High doses of vitamin C appear to limit the occurrence of OA and prevent its progression.4

Vitamin D receptors have been shown to be present on cartilage suggesting a role for vitamin D in the prevention and treatment of OA.5 High doses of vitamin D protected against progressive hip OA.6

There is quite strong genetic linkage to OA especially for OA of hips, hands and possibly knees.7

There are a range of local conditions which may have consequences on the development of OA. These include laxity of knee which may develop with age and complicated by a decreasing sensitivity to position of the joint (proprioception) and various misalignments that may also occur. Muscle weakness may also be an important factor contributing to OA and why exercise is a preventive factor in the development of OA. Even a small increase in muscle strength was predicted to result in a 20% to 30% decrease in the odds of developing OA of the knee.8

Certain competitive sports do increase the incidence of OA9,10 and this is clearly compounded by injuries and especially injuries that are not handled well and where athletes don’t give themselves enough time to rest. Jobs requiring constant repetitive tasks and where muscles become fatigued also contribute to the development of OA.

The cartilage is an astonishing material with very high water content. At the same time it must not be too rigid and maintain a high degree of permeability. There is also some fluid in the joint space that ‘shares’ the load, shielding the collagen matrix from excessive stresses and reducing friction at the surfaces.

Changes in the permeability, degree of stiffness, and water content can all influence the development and speed with which OA can develop. A report in the BMJ indicated that there was growing evidence linking OA to ageing vascular disease with a decreasing blood supply to the cartilage.11 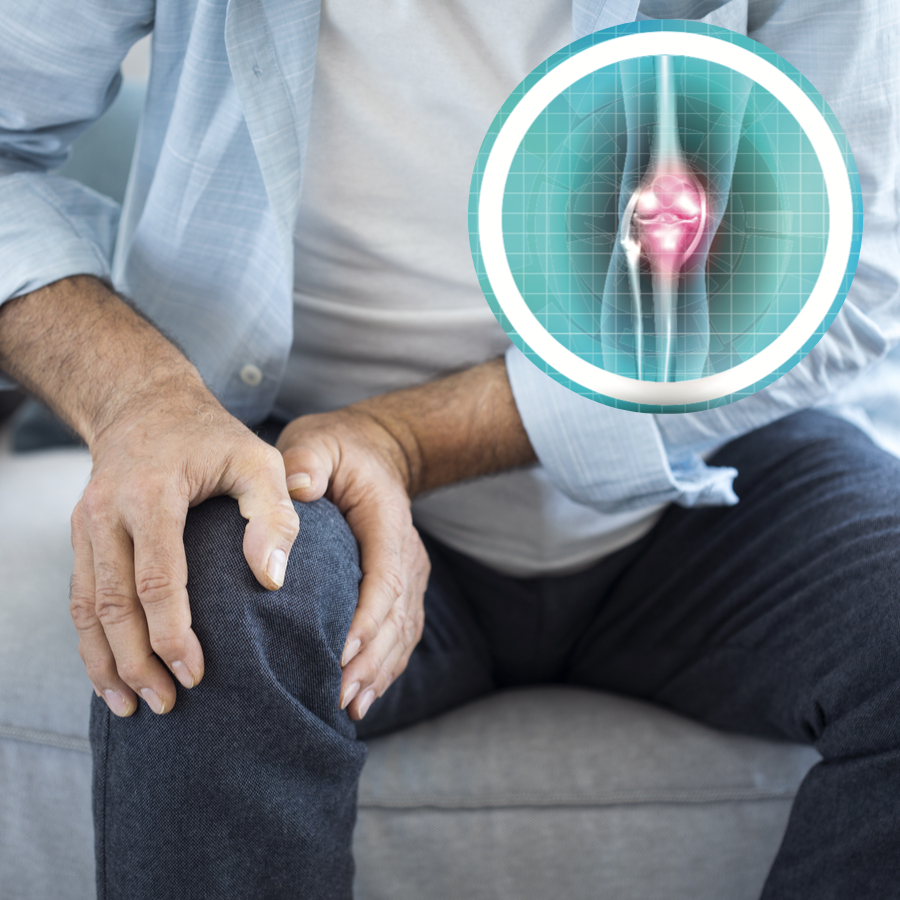 In this article, I have attempted to broaden the rather narrow viewpoint around OA as just a degenerative disease. The cartilage is a brilliant piece of equipment well placed to do the job for a very prolonged period of time. Despite the fact that it appears to have borders and may seem to be clearly differentiated from the underlying bone and the layer of fluid lying between it and the cartilage adjacent to it, there is a constant passage of information and substance between it and the adjacent tissues and between it and the rest of the body. Cartilage is subject not only to the surrounding physical pressures but also the flow of information and biochemistry sweeping in and out.

It is essential to understand this dynamic and creative process. The body as a whole is a system of pressures, processes and forces which combine together to create the best balance/homeostasis possible and involves the joints just as much as it does other parts of the anatomy. The basic building blocks are vitamins, minerals and other nutrients. Any deficiency in the body of a key nutrient for cartilage regeneration will have an effect on the possibility of healing. Healing is not only the repair of damaged tissues but also the replacement of the constant turnover of the natural dying of normal cells.

Metabolic shifts within the body due to any disorder, for example diabetes, may also impinge on the cartilage. Local effects due to injury and strains may be easier to understand but in this article, I wanted to emphasise that the joint is not separate from the rest of the body and arthritic changes may represent poor life style, under nutrition and even emotional stress. With this in mind it becomes easier to understand why it is that Integrative practitioners will recommend nutritional supplements and emphasise life style changes in the management of OA. Anti- inflammatory medicines are symptomatic treatment and do not improve the health of the joint. Surgery is invasive and should be avoided unless all other options have failed.

continue to top
View our newsletter archive and subscribe
FacebookTwitterLinkedInWhatsappPinterestEmail

About the Author: Bernard Brom