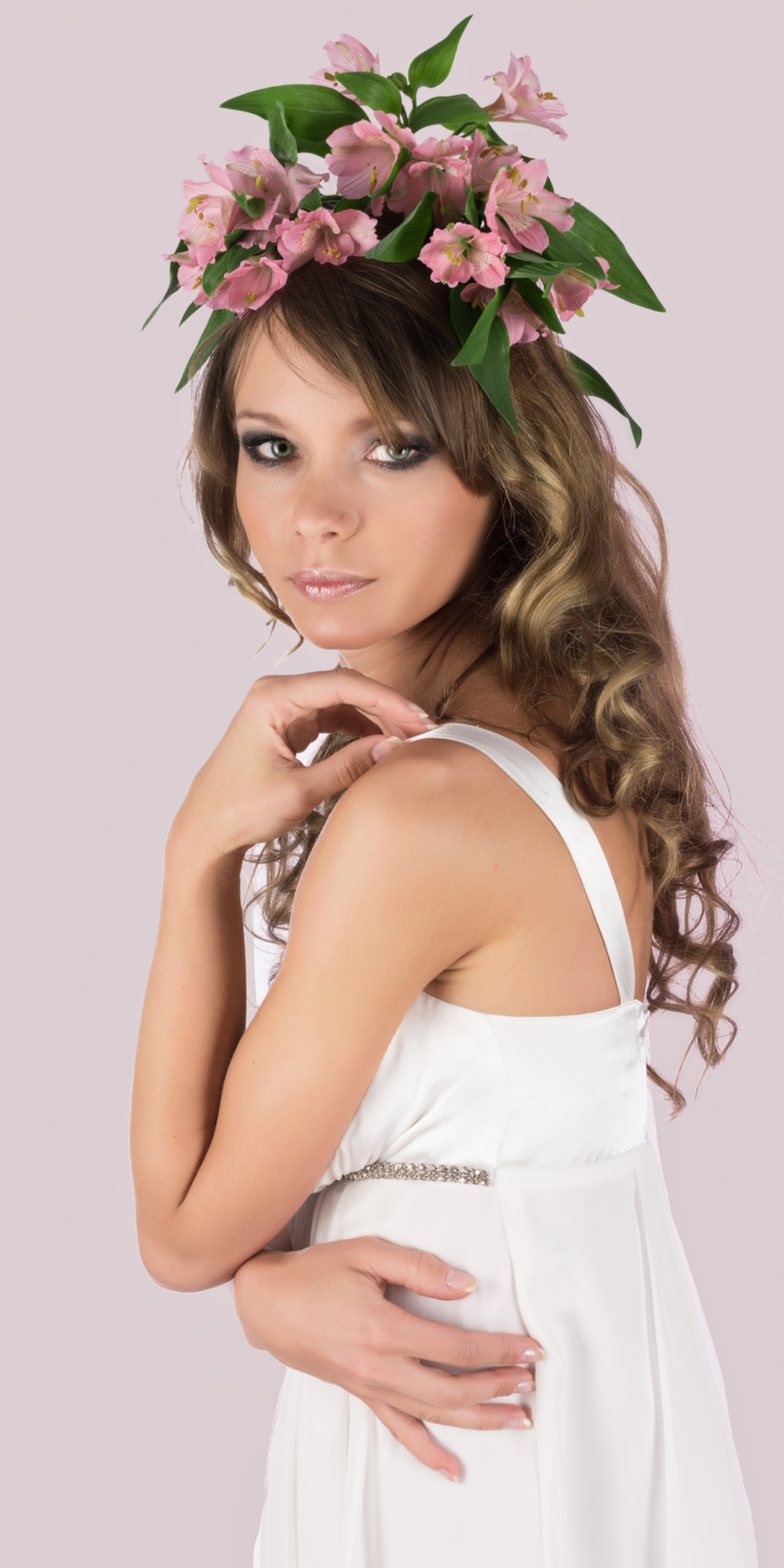 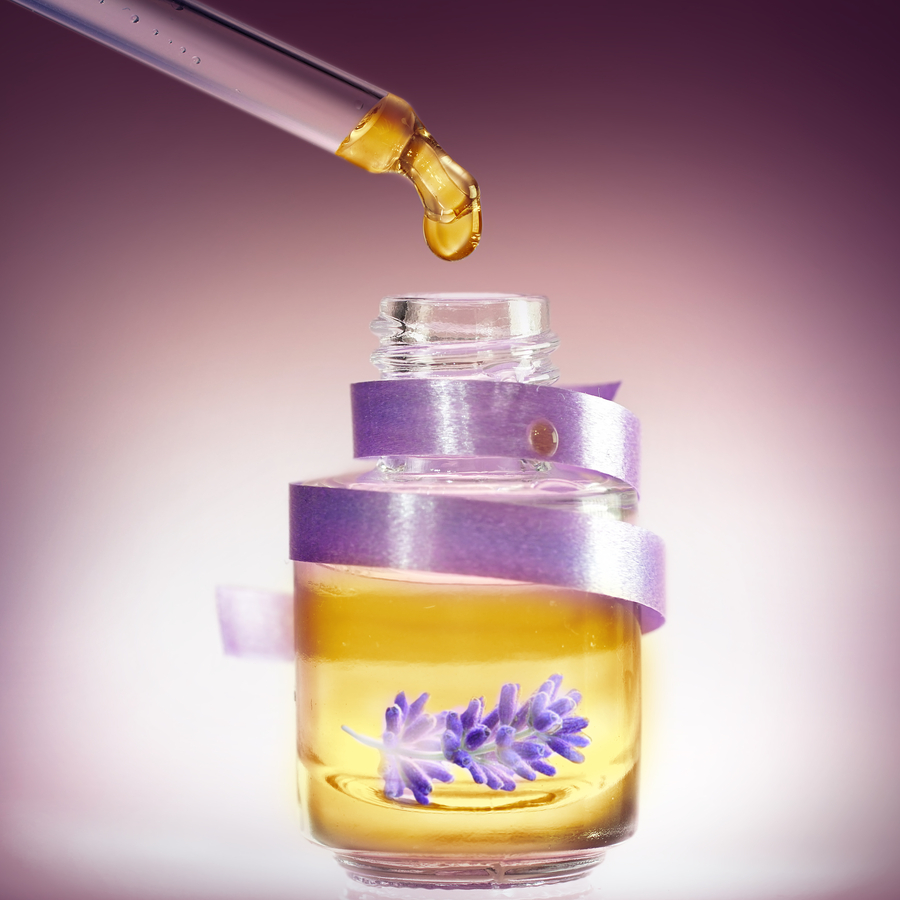 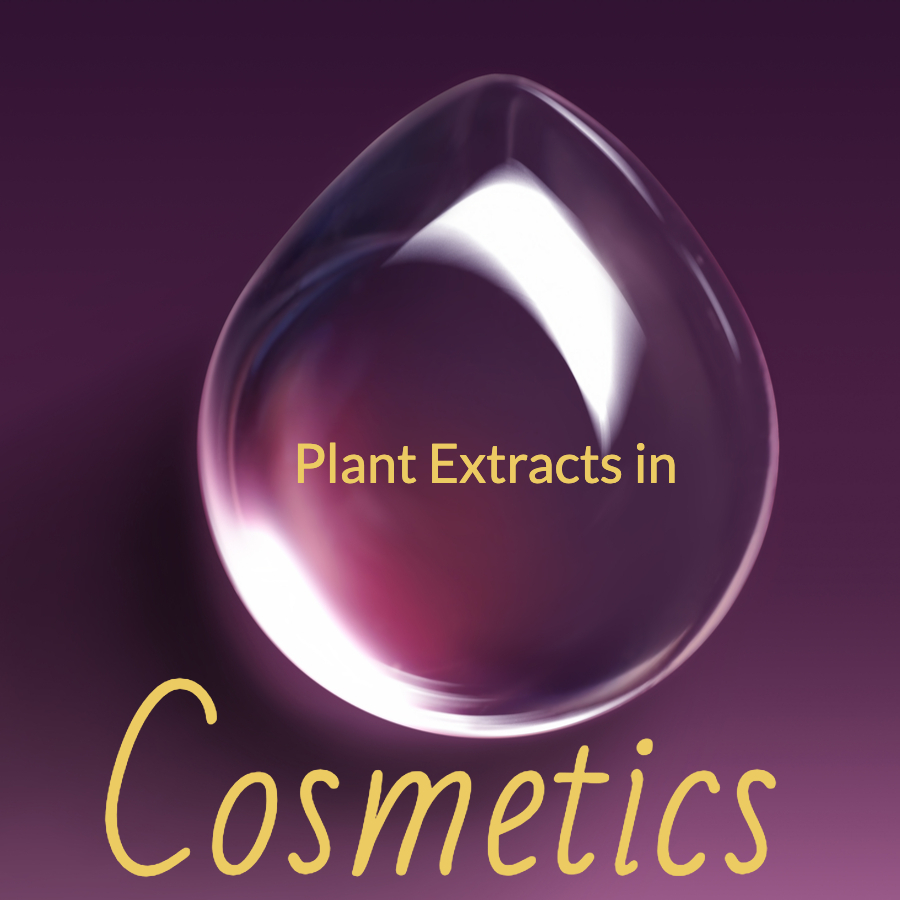 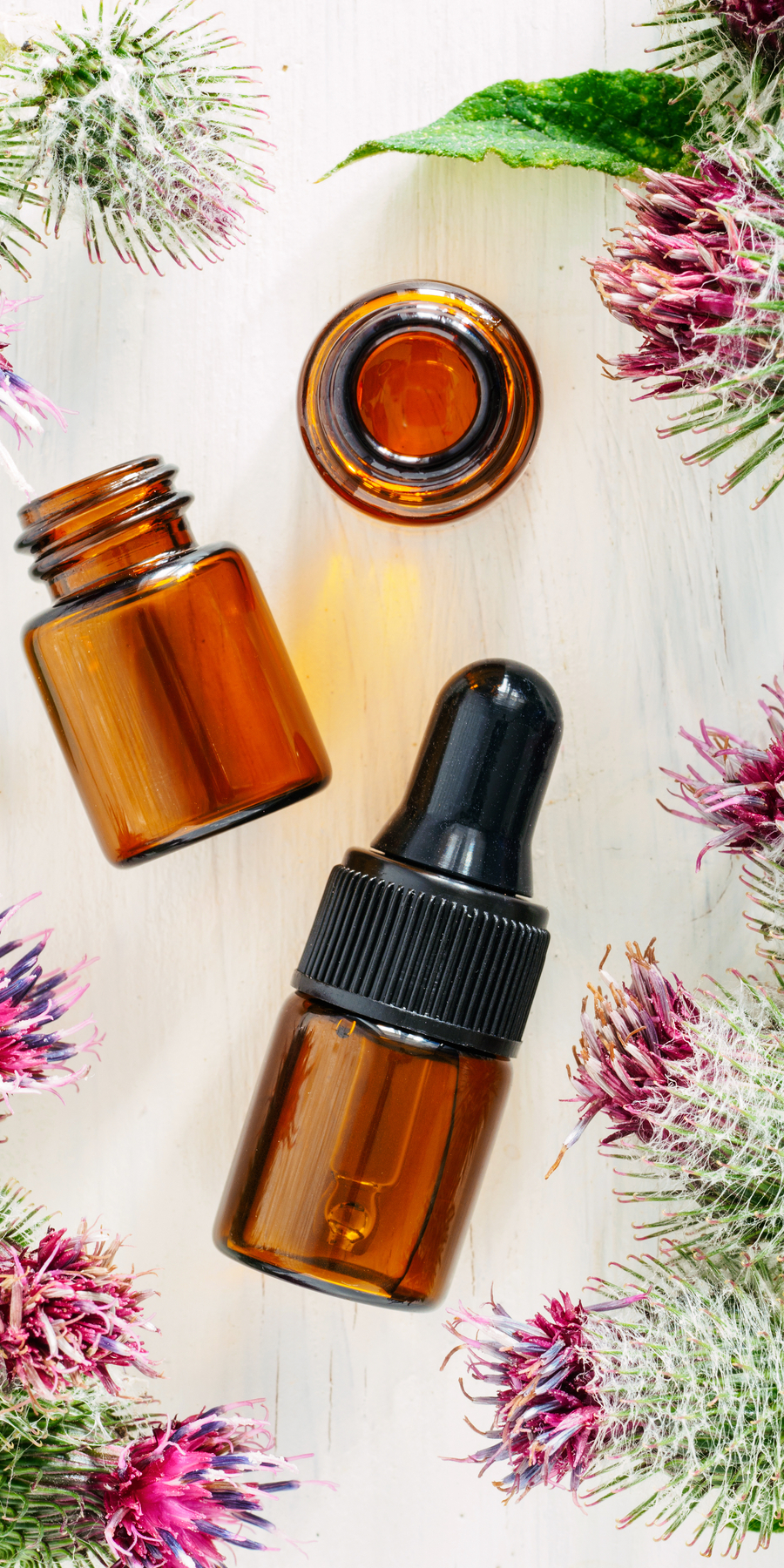 There is nothing either good or bad, but thinking makes it so. Hamlet (Act 2, Scene 2)

Plants have been used since the dawn of time for food, medicine and beauty. Some may have been good for the skin, some not so good. And while many ingredients used for skincare have received negative press at some point – even olive oil (for being too occlusive) – plants can and do have a very profound effect on the skin, if used properly. It is therefore understandable why the cosmetic and toiletry industries are increasingly focusing on (and sometimes exploiting) a source that is green, renewable and eco-friendly.

For a long time plants, such as herbals, were used for skincare based mainly on traditional experience or empirical evidence. With the advent of science, the vast complex of active phytochemical ingredients that are able to soothe, restore, heal and protect the skin have been revealed. This sound scientific research has backed up many anecdotal claims. Add to this consumer-driven awareness and demands, and it becomes self-evident why there’s a good reason for so many people and companies ‘going green’ these days.

The serious commercial interest in botanical ingredients started in the 1990s and is still on the up-and-up today. A botanical ingredient, as a component of a cosmetic or skincare product, may be defined as a substance that originates from plants: e.g. herbs, leaves, roots, flowers, fruits or seeds. I must declare that when it comes to plants and cosmetics, as a formulator, supplier, and teacher of natural cosmetics, I have a potent bias towards using natural and organic substances whenever and wherever possible. I do however recognise, and appreciate, the value and merit of many other cosmetic ingredients that go into formulating effective and stable products.

When it comes to plants in cosmetics it’s important to differentiate or take into account the use of ‘simple’ plant materials or extracts versus ‘functional botanicals’. Simple plant materials may, for example, include substances such as cold-pressed or otherwise extracted vegetable oils, and distilled or expressed essential oils, whereas complex functional botanicals reside more within the scientific cosmetic arena. Plants can be used in three forms in cosmetics: either as total extracts of the whole plant e.g. Aloe vera gel; as selective extracts of the plant e.g. wheat germ, or as isolates i.e. single molecules isolated from the extracts e.g. vitamins.¹ There is good scientific research to back up the efficacy of some of the functional botanical claims, so it’s not all marketing smoke-and-mirrors (though there is a lot of that too if some of the adverts for skincare products are analysed as a measure of the industry’s creativity). I must admit I do state, in one of my product line information snippets, ‘Inspired by Nature ~ Enhanced by Science’ – not just for wordsmith-value, but because I have found it to be true.

The plant world has so many useful materials to soothe and calm the skin that it is impractical to even attempt to mention them all, but I’ve chosen a few that have been well-researched, or are well-known, to highlight. To illustrate: a hand cream made using water (or a hydrosol, i.e. a plant-water); several oils such as almond, avocado, olive etc.; and a few essential oils like geranium and chamomile – along with an emulsifier to bind the ingredients together, and a preservative system to stop bugs growing in this happy medium – is perfectly fit-for-purpose and relatively simple to create. On the other hand (no pun intended), if the hand cream is designed specifically for gardeners, where the skin may end up being inflamed, irritated or otherwise damaged, it would be beneficial to include some ingredients that could soothe these symptoms. This is where the addition of commercial functional botanicals could raise a simple hand cream to other heights (besides raising the blood pressure due to a potentially increased price ticket!) The same applies to face creams. But levity aside, while simple and/or complex natural ingredients can work wonders, e.g. German chamomile (Matricaria recutita) a potent anti-inflammatory essential oil or tincture, specialised botanicals do have a place – even for DIYers. But for purposes of this article, let’s keep the focus confined, and give attention to a few ingredients that are specifically known to soothe inflamed skin conditions.

So, using a hypothetical ‘Gardener’s Hand Cream’ as an example, the inclusion of a standardised extract of Pennywort or Gotu Kola (Centella asiatica) along with an extract of one of the Aloes (vera, ferox, barbadensis) could make a significant difference in a formulation, relative to the redness associated with inflammation and irritation, as well as to any cut or grazed skin. Researchers found that C. asiatica showed great promise for treating numerous inflammatory skin problems.² 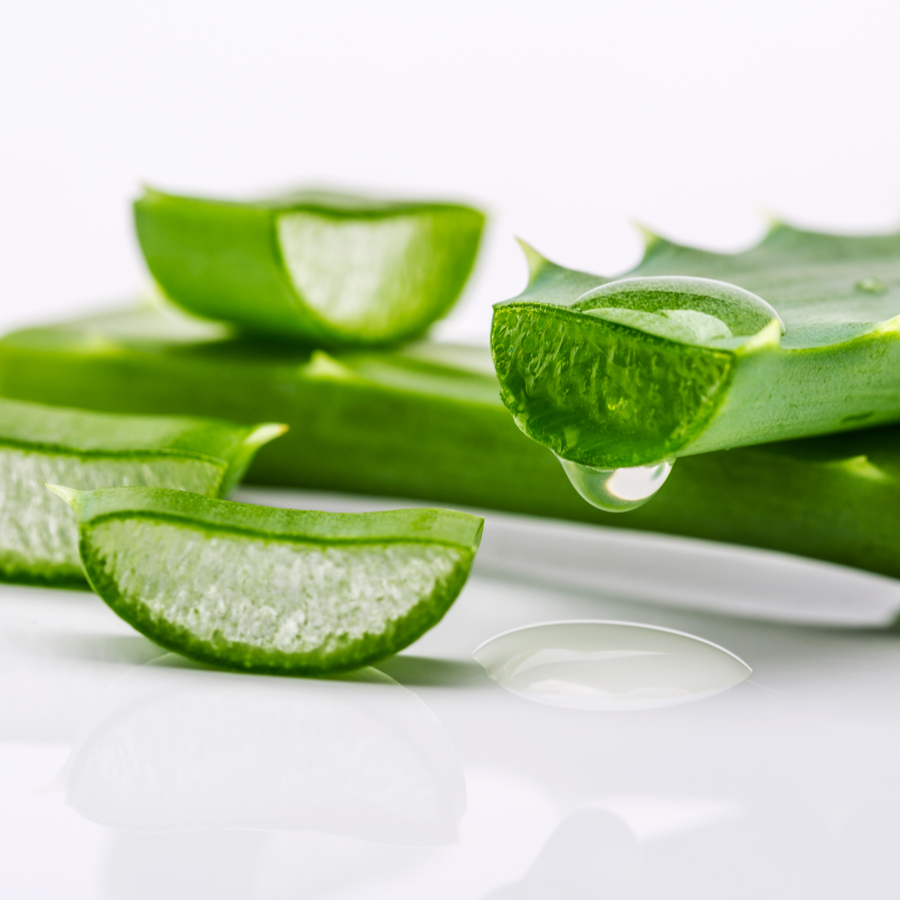 Although there are over 500 species in the Aloe genus, only a few have been scientifically validated for clinical efficacy. Most of this clinical data is impressive – due in part to extensive research initiated by the effect of Aloe on various forms of burns. For example, the protective qualities of Aloe arborescens against radiation have been reported.³ 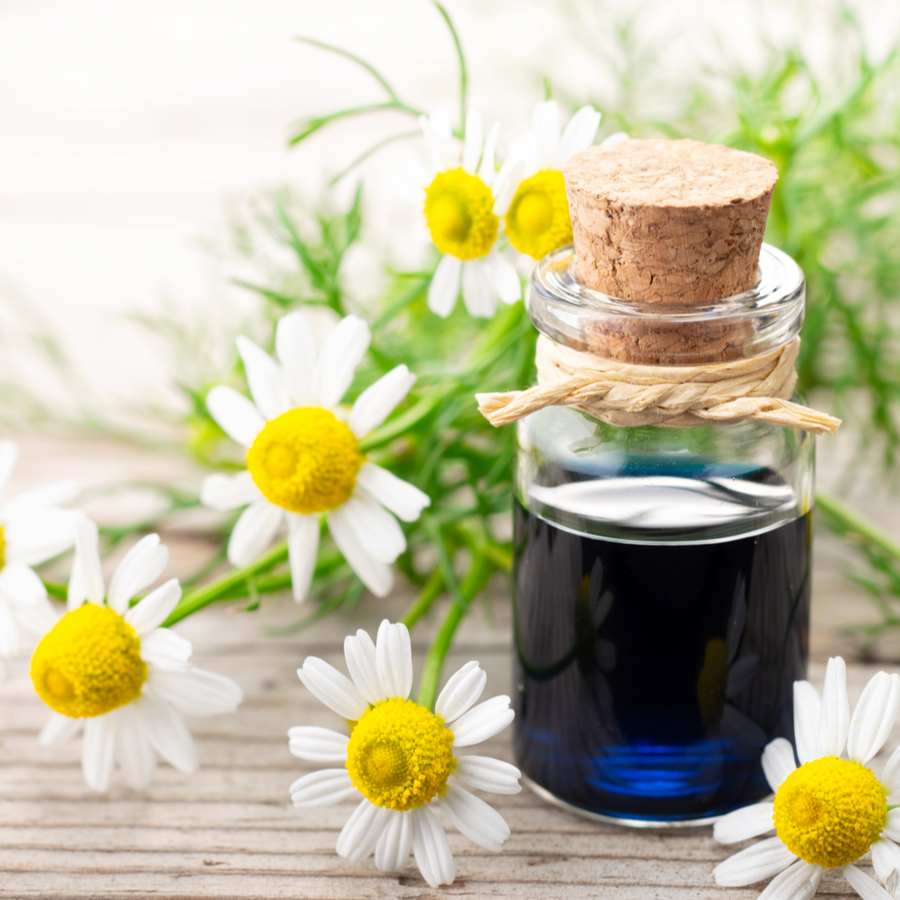 Although the skincare benefits of aromatic essential oils are myriad, space doesn’t allow for much expansion in this regard, so I’ll confine my enthusiasm to German chamomile, since I’ve already mentioned it above, and because it is probably the oil best-known for its topical anti-inflammatory activity. In addition, there’s an impressive body of scientific research that validates its properties. There is one particularly interesting eczema study4 that compares the conventional treatment for inflammation and redness, hydrocortisone, with a commercial chamomile cream, in which the cream showed superior action over its cortisone counterpart.

There are four principle chemotypes of German chamomile based on the comparative percentages of its constituents. It never ceases to amaze me that the tiny little white chamomile flower yields the brilliant blue chamazulene-rich oil. More so since this component is not present in the flowers, but is formed during the process of steam distillation. 5 Isn’t Nature wonderful? Chamomile is a colour therapist’s dream, since there is also a red component to the oil called chamaviolin, mentioned in Leung and Foster’s excellent publication, Encyclopedia of Common Natural Ingredients used in food, drugs and cosmetics.6 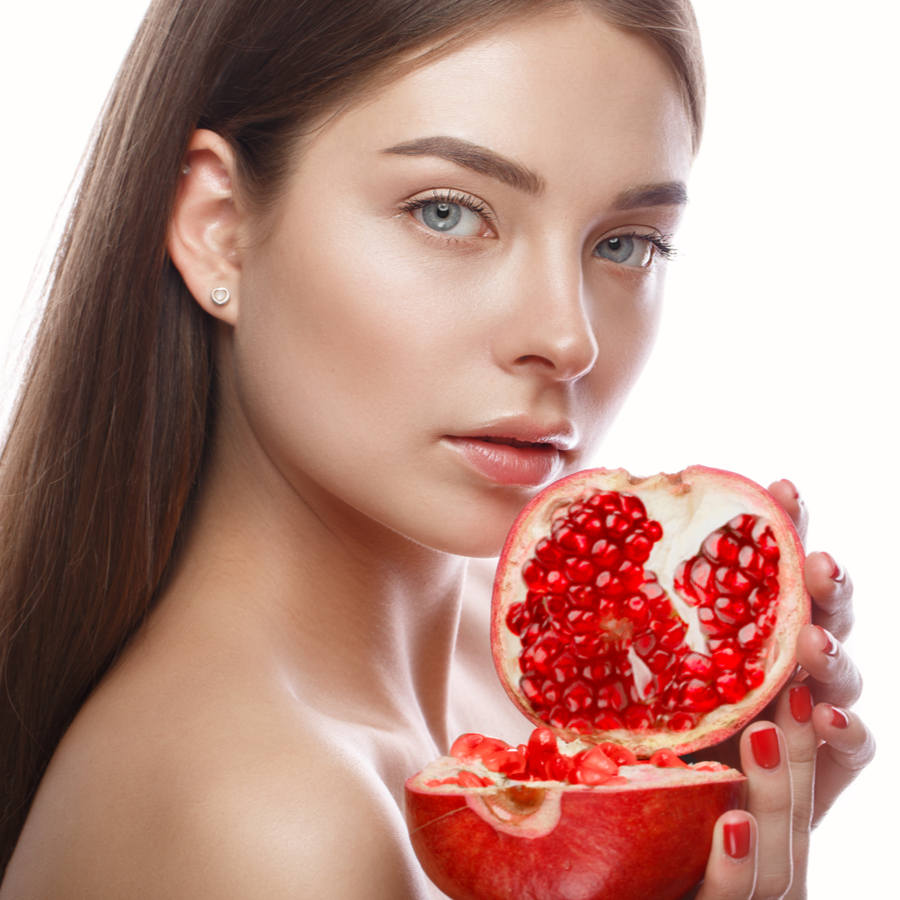 Pomegranate seed oil (Punica granatum) is a polyphenol-rich oil, making it strongly anti-oxidant and relatively stable. This oil contains up to 76% of a conjugated linolenic acid known as ‘omega-5’, which confers potent anti-inflammatory properties that make it suitable for irritated and inflamed skin. Its phytosterol content (which has a cortisone-like action) adds to its anti-inflammatory and antipruritic (reduces itching) actions. Pomegranate’s interesting fatty acid profile plus other components including some vitamins and minerals make it suitable for dry skin conditions and ageing skin. A study showed that the fatty acid ellagic acid reduced the destruction of collagen and modulated the inflammatory response. Research from the University of Michigan Medical School showed that pomegranate seed oil promotes regeneration of the epidermis. Pomegranate oil is a good choice for injured, mature and dry skin, as it improves the skin’s elasticity, is anti-inflammatory, moisturising, soothing, and regenerates skin cells. Being of light viscosity, it penetrates well and absorbs easily. Pomegranate is one of the more expensive fixed oils, but well worth the cost in my experience. 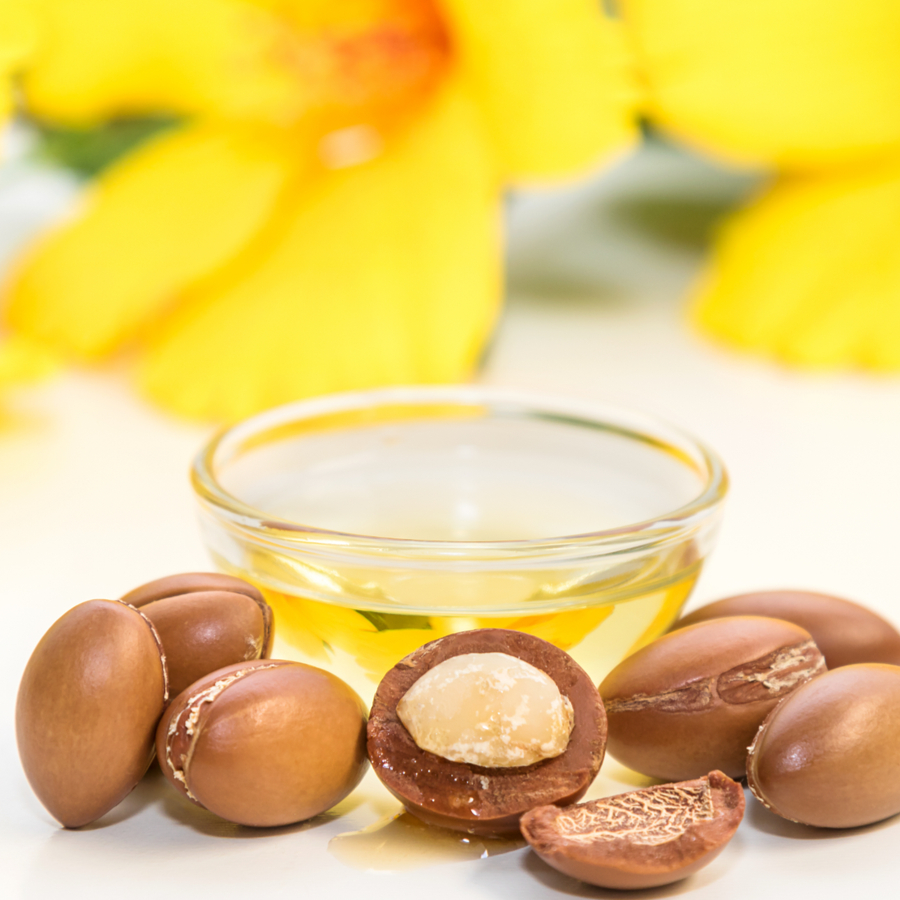 Argan oil (Argania spinosa) contains rare plant sterols (phytosterols) not found in other oils. It is believed that the phytosterols in argan oil are unique in their combination. Cosmetically, argan is considered an effective anti-ageing oil due to various properties such as the high levels of anti-oxidants (vitamin E/tocopherols) and saponins (skin-softening agents). The tocopherols and flavonoids in argan oil act as natural anti-oxidants and anti-inflammatories respectively, properties that help control premature ageing. Besides cooling and soothing inflammation – important considerations for skin that has been exposed to environmental aggressions like wind, sun and cold conditions – it is also reputed to help reduce wrinkles by restoring the skin’s hydro-lipid layer. Like all vegetable fats, argan oil has softening, anti-drying and protective effects. It also has revitalising, moisturising and restructuring properties due to its high content in unsaturated fatty acids, making it a very suitable substance for damaged and mature skin.

On the home-front we are so blessed with indigenous and natural plant ingredients in Africa. The fixed or vegetable oils from this continent are just the tip of the iceberg, let alone the many wonderful volatile essential oils and other botanicals, like rooibos (Aspalathus linearis) with which we have been endowed by Mother Nature. In my experience most of these function wonderfully well – as skincare ingredients – even if there isn’t yet as extensive a body of research to back up this opinion as there is for some other botanicals. Some of my favourites for skincare include fixed oils from the majestic baobab (Adansonia digitata), marula (Sclerocarya birrea), moringa (Moringa oleifera), and Cape chestnut (Calodendrum capense) – to mention just a few, as well as some of the wonderful seed oils like Kalahari melon seed (Citrullus lanatus). The same applies to our indigenous essential oils such as Cape chamomile, buchu (Agathosma betulina), rose geranium (Pelargonium roseum), and many other natural local plant wonders. 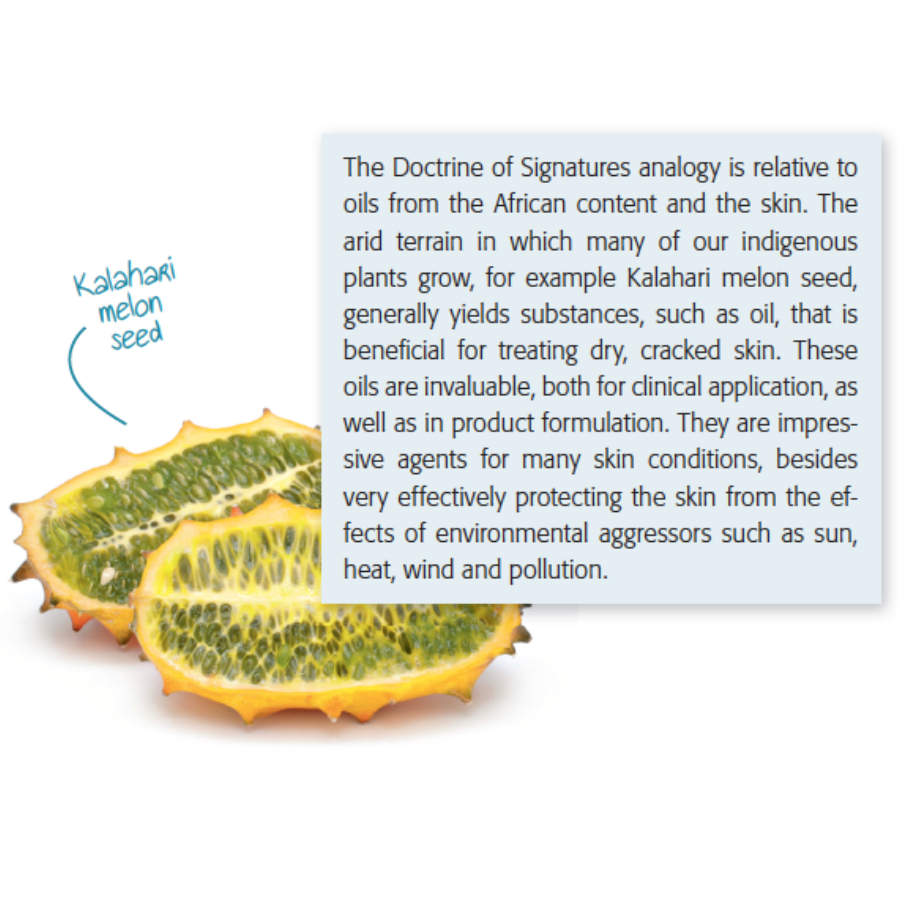 I’ve mentioned rooibos, but other tea extracts, such as green tea (Thea viridis), are also popular in skincare products due mainly to their detoxifying chemicals known as polyphenols. Another popular functional botanical is red grape (Vitis vinifera) skin, which also contains flavonals, xanthophyll and carotene (carotenoids), plus vitamins A, B1, B2 and C. It is often included in skin products for its exceptional anti-oxidant benefits.

And there’s more ‘foody’ functionals such as carrot, tomato, and turmeric that all confer beneficial properties for treating inflamed skin conditions, besides their other actions. Though turmeric has been successfully used in parts of Africa for healing rashes, inflammation and itching,7 I’m not sure if the yellow jaundiced-tan look is too appealing anywhere other than Essex in the UK! This occurs especially if this substance is applied in powdered root form, which tends to stain the skin a very jolly yellow.

There are several botanical extracts purported to treat this stubborn condition. The major plant extracts used are ivy (Hedera helix), horse chestnut (Aesculus hippocastanum), and butcher’s broom (Ruscus aculeatus). Additional materials that are often included in anti-cellulite products are caffeine, to stimulate the tissue – either from coffee (Coffea arabica) or an extract of guarana (Paullinia cupana) from the seeds of the Brazilian shrub. Some other favourite additives are papaine, a proteolytic enzyme from papaya (Carica papaya) or bromelaine from pineapple (Ananas cosmosus), as well as various marine-based materials, especially bladderwrack (Fucus vesiculosus).

A few final excellent skincare botanicals that deserve comment, and which are relatively freely available are rose hip (Rosa rubiginosa), which yields the glorious rose hip seed oil, and Calendula (Calendula officinalis). Extensive studies have been carried out with rose hip oil regarding healing and regeneration of damaged tissue.8 Calendula, both the lipidic extract and tincture forms, have also shown excellent effect for a wide range of conditions, including inflamed cutaneous lesions. Calendula also has a healing effect on bruises,9,10 which is, for example, one of the reasons I’ve included it in my Gardener’s Friend Hand Balm (Serendipity Quintessentials), since bumps and bruises are occupational hazards most gardeners encounter.

There are so many wonderful plant-based options, such as shea butter (Butyrospermum parkii) and cocoa butter (Theobroma cacao), and sound reasons for using them in cosmetics, that it feels like a betrayal not to include them all. However, let it suffice to conclude that we are spoiled for choice (and don’t forget the humectant benefits of good old glycerine, which I’ve reported on before in issue 110, p 91). There’s no excuse for anyone not to try them, whether it’s slathering the inside of your avocado pear skin on your face after eating the yummy flesh, or patting some olive oil onto your dry hands after making a salad dressing, or getting more creative with the other natural wonders available to you. Just try it – and let your skin tell the story. 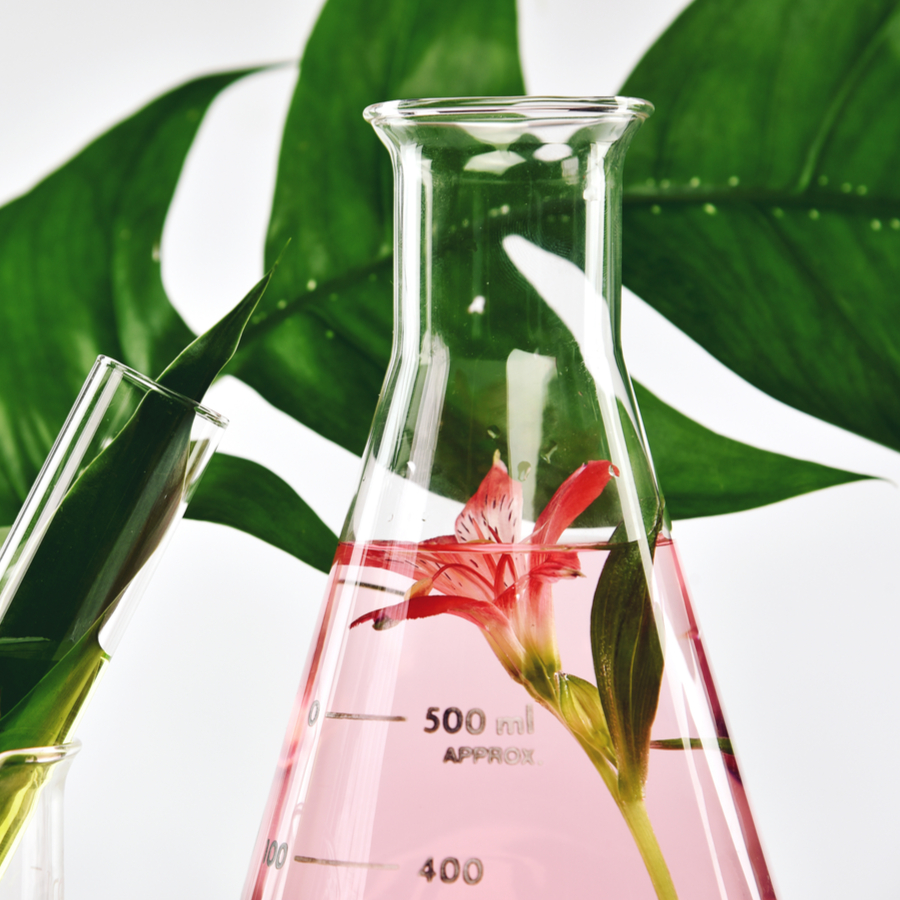