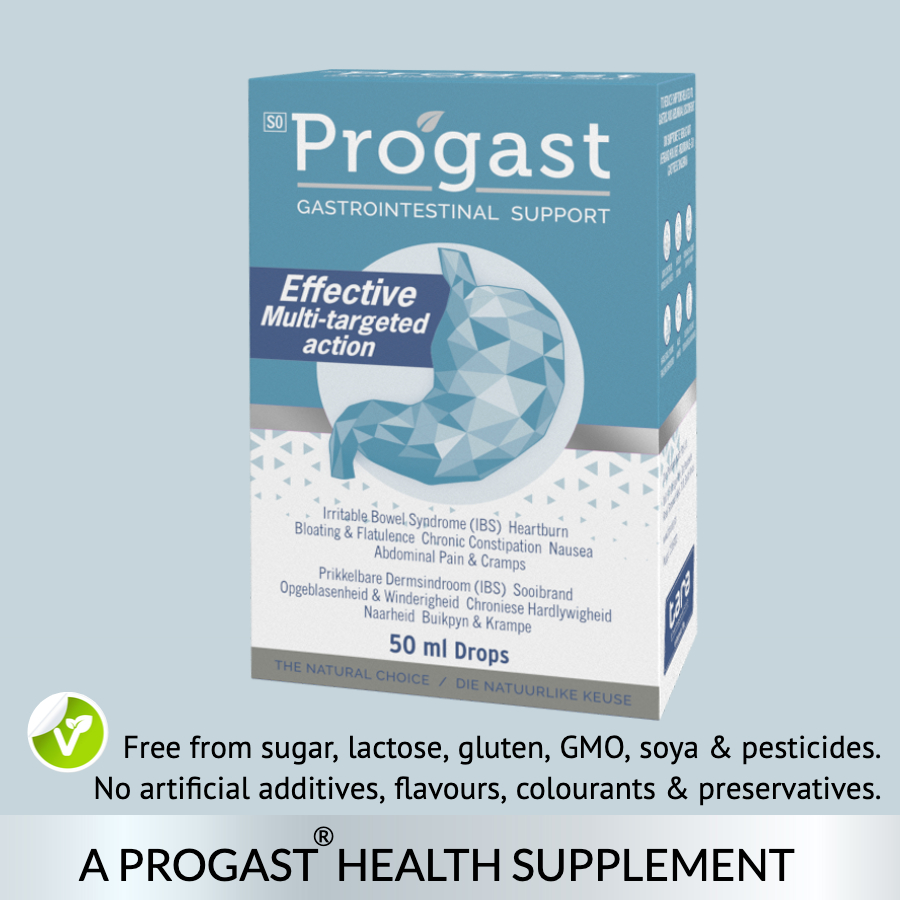 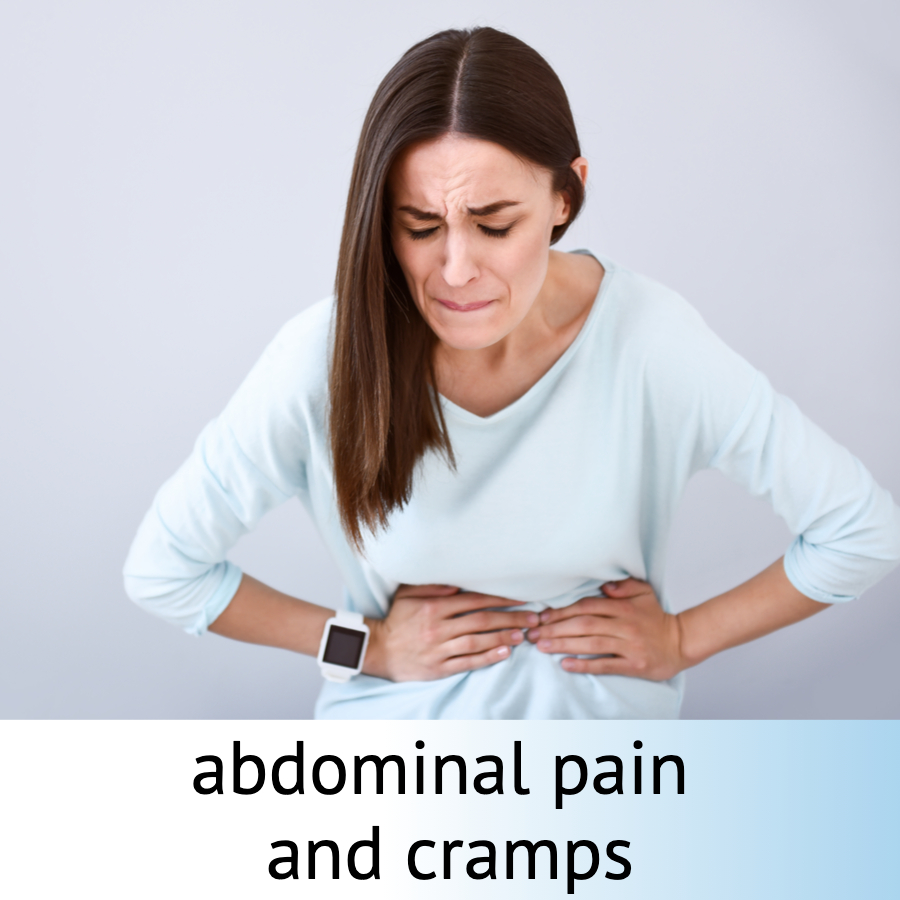 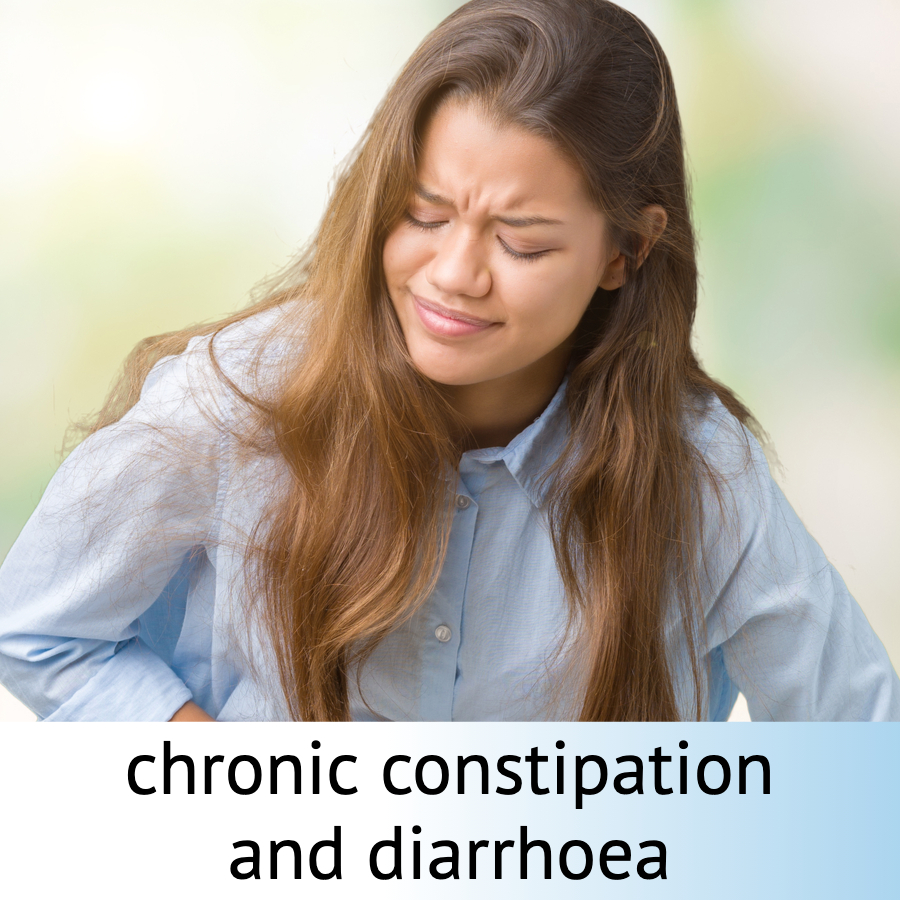 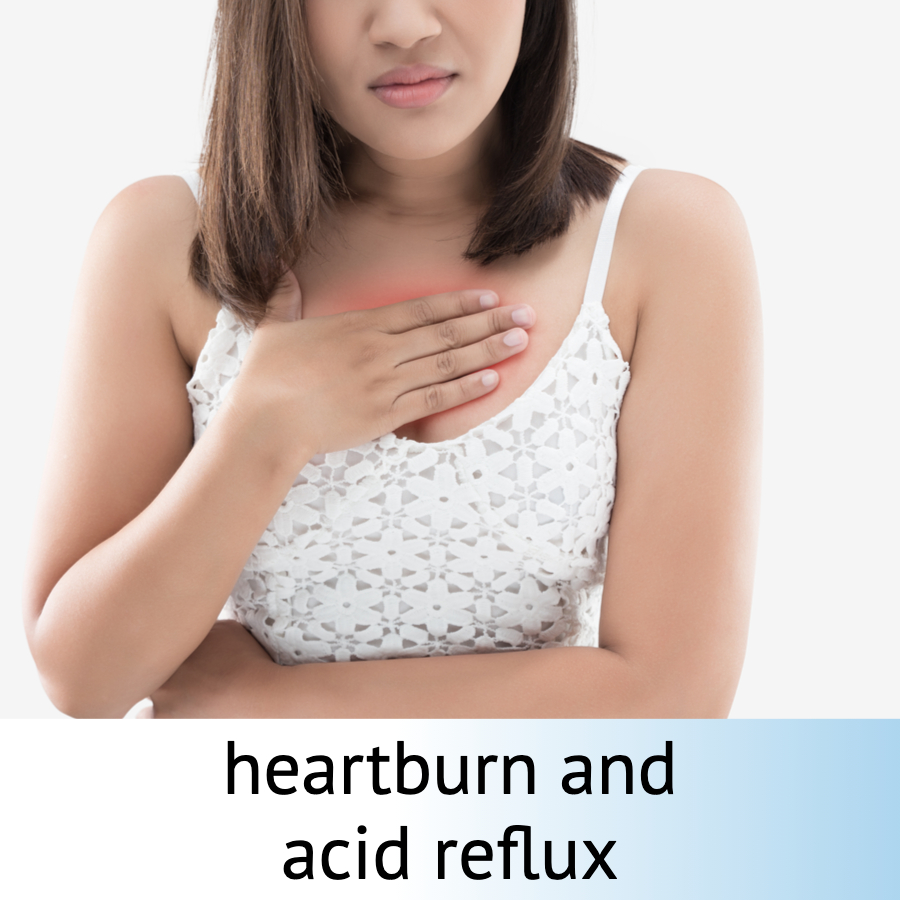 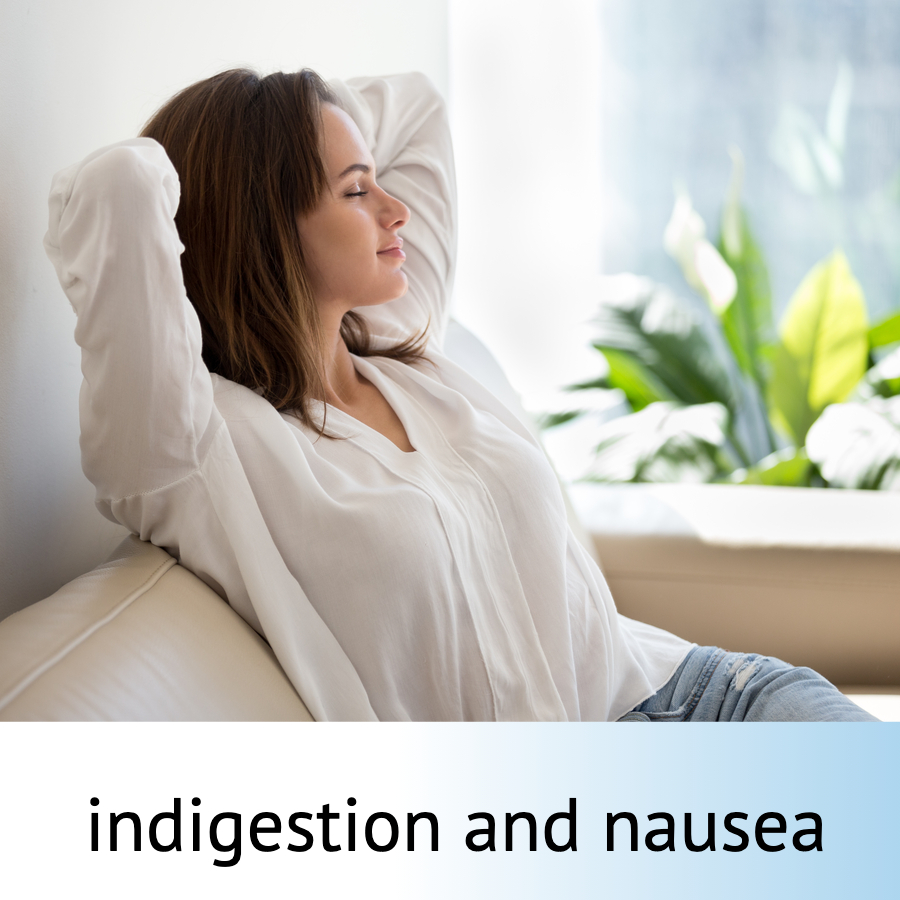 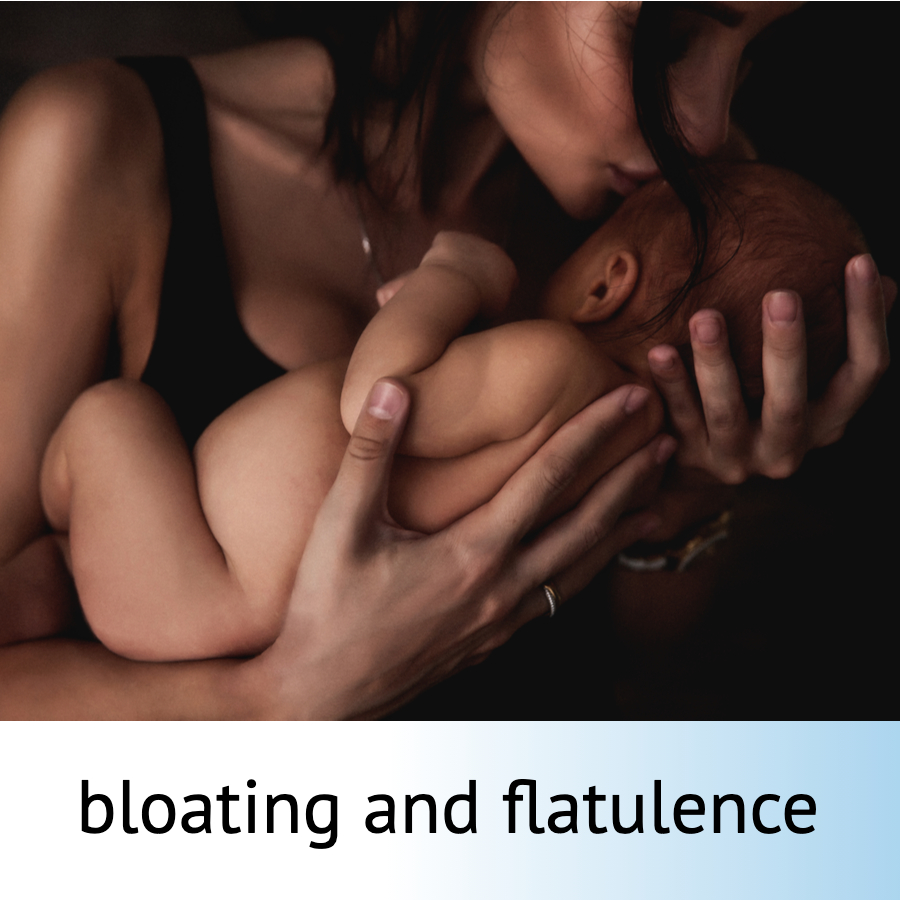 Nearly everyone experiences some sort of gastrointestinal discomfort at some point or another. Digestive diseases range from common digestive disorders to serious, life-threatening diseases. According to a study by Halder, out of the Mayo Clinic, one in three individuals have a digestive disorder. We reviewed PROGAST® GASTROINTESTINAL SUPPORT DROPS as a natural remedy for digestive complaints.

It’s of utmost importance to shift our focus to uncover possible causes of disease of the digestive tract, and not treat symptoms only. Adoption of an integrative treatment protocol, looking at dietary and lifestyle modifications as well as natural solutions, would achieve more effective prevention and treatment of digestive disease. 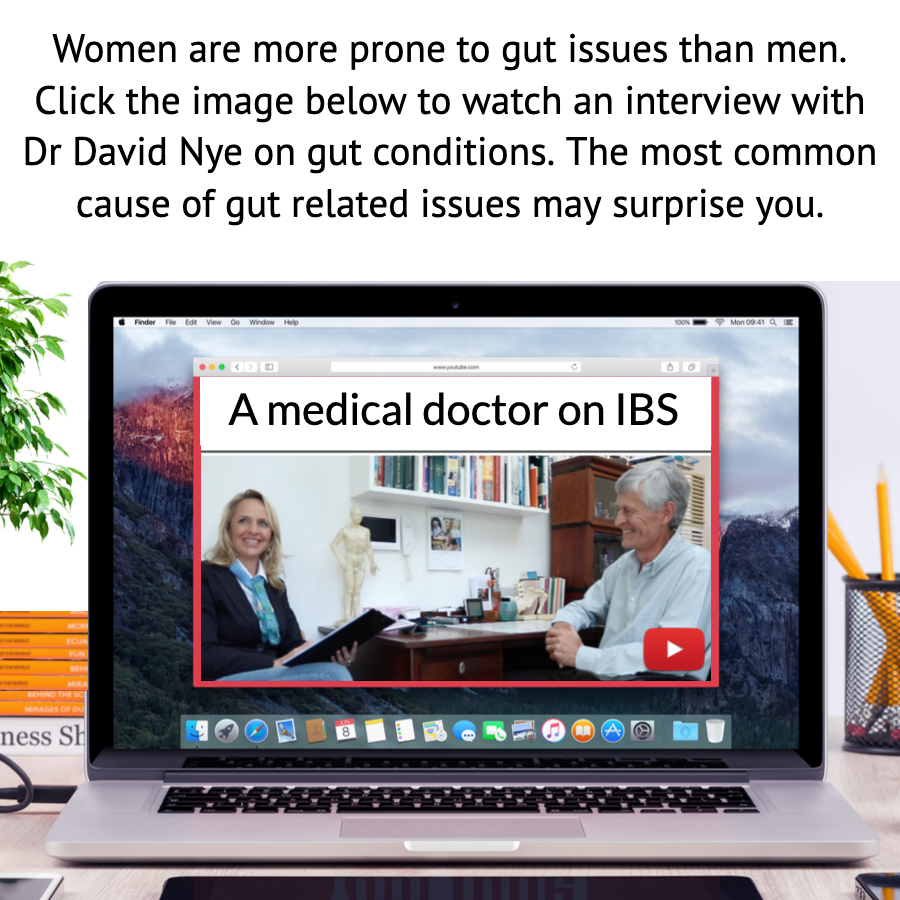 THE GUT AND BRAIN CONNECTION

For many, the symptoms of gut disorders go hand in hand with stress and anxiety – we experience the effects of the brain on the gut every day. Furthermore via signalling, the gut plays a specific role in the regulation of behaviour and mood. The gastrointestinal tract is sometimes described as our second brain (enteric nervous system) and is controlled by its own complex nervous system, comprising more neurotransmitters than in the entire brain.

It is the connection and bidirectional communication between the gut and brain through the vagus nerve (gut-brain axis) that regulate, control and modulate changes in the activity of hypothalamic-pituitary-adrenal axis and changes in the brain, such as memory performance and cognition.

In addition to its critical role in immune health, the gut lining absorbs nutrients while acting as a barrier to macromolecules and toxins. The gut microflora provide an additional barrier that forms the biofilm. The thickness of the biofilm and its spread, decreases with inflammation, increasing intestinal permeability (leaky gut).

Stress significantly increases intestinal permeability, and with that the overall toxic burden, and is a leading precursor for many autoimmune diseases. One of the modes of action of the actives used in Progast® appears to interact with your neurological system and counteract the effects of stress and other psychosocial factors via your gut-brain axis.

PROGAST® THE POWER OF TEN

Progast® is a herbal tincture containing ten botanical extracts and is a popular natural remedy for those seeking an effective drug-free solution for their digestive issues.

The art of the combination of herbal preparations is a typical feature within phytotherapy1 and has been at the heart of herbal medicine for thousands of years and in all ancient cultures. A combined herbal preparation has the potential of becoming more than the sum of its parts.2

The herbal extracts in Progast® were selected because of its similar purpose, targeting different symptoms. One herb has a primary function, the others either facilitate that function or counterbalances any possible negative reaction. And not only are the presenting symptoms attended to but also the underlying constitutional imbalances that give rise to them. 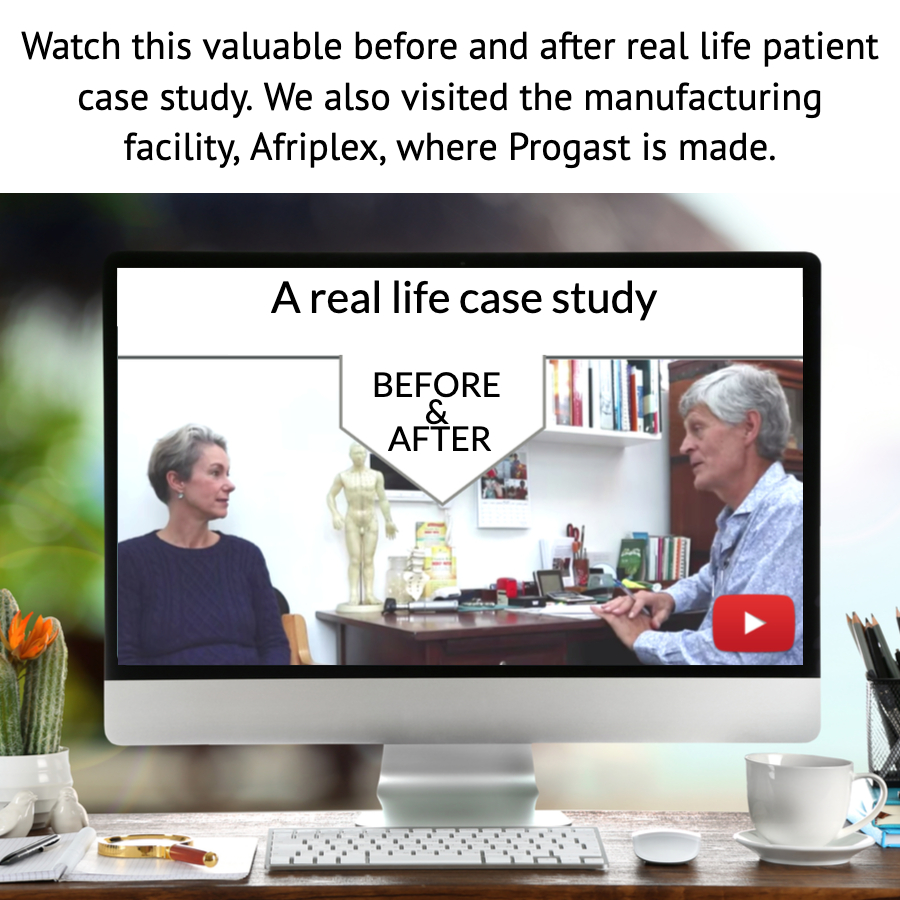 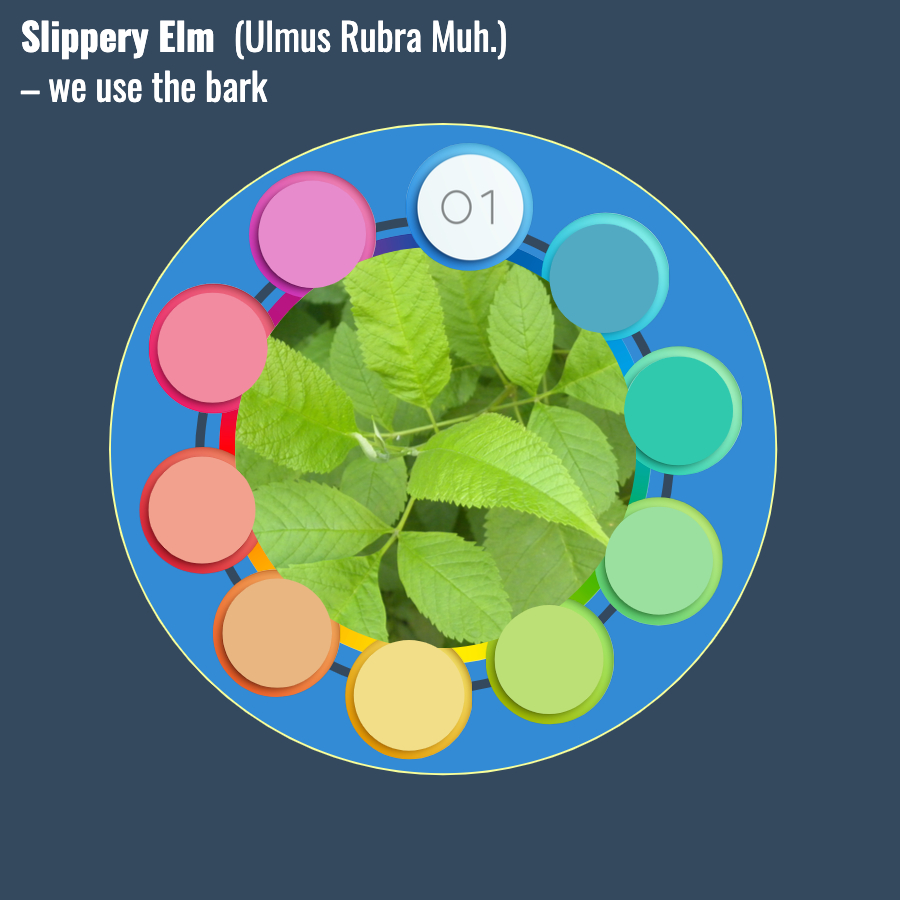 Slippery elm alludes to the mucilaginous (thick, gluey) inner bark and has long been used (dried and powdered) as a demulcent, forming a soothing film over mucous membranes. It is traditionally used to coat the mouth, esophagus, stomach and intestines.

Demulcents (such as  honey and glycerine) are known as muco-protective. Herbalists prescribe slippery elm as a coating against acidity and to ease the discomfort caused by acid reflux, pain and inflammation. According to the University of Maryland Medical Centre, slippery elm causes reflex stimulation of nerve endings in the GI tract, leading to mucus secretion. The increased mucus production may protect against stomach ulcers and excess acidity.

Slippery elm was an active in two IBS remedies tested in a pilot study, and both remedies showed enhanced bowel movements in patients with constipation-predominant inflammatory bowel conditions.6

The damaging effect of reactive oxygen metabolites (the by-product of oxygen metabolism) to normal tissue and cell growth, have been shown in patients with inflammatory bowel disease7. The antioxidant effect of slippery elm interferes with oxidative metabolism.8 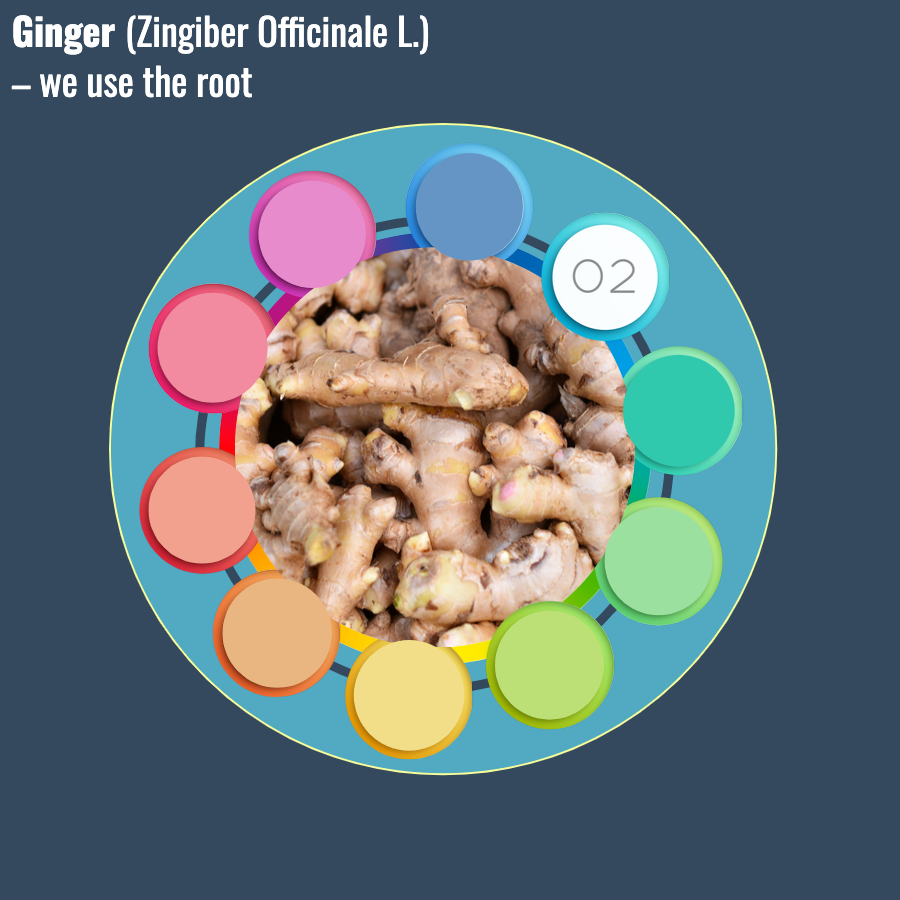 This popular herb helps to relax the smooth muscles in your gut lining and assists with digestion by speeding up the movement of food in the intestinal tract.10 Promising research shows ginger improves, maintains and protects the barrier function during gut inflammation. It did so by decreasing the levels of nitrite.11

Ginger with its numerous bioactive molecules was shown in a cancer study to not only target cancer cells, but can also reduce chemotherapy‐associated side effects.12,13

Anti‐inflammatory, antioxidant, antitumor, and antiulcer effects of ginger have been proven in many scientific studies, and some of the ancient applications of ginger as a home remedy has been confirmed.14 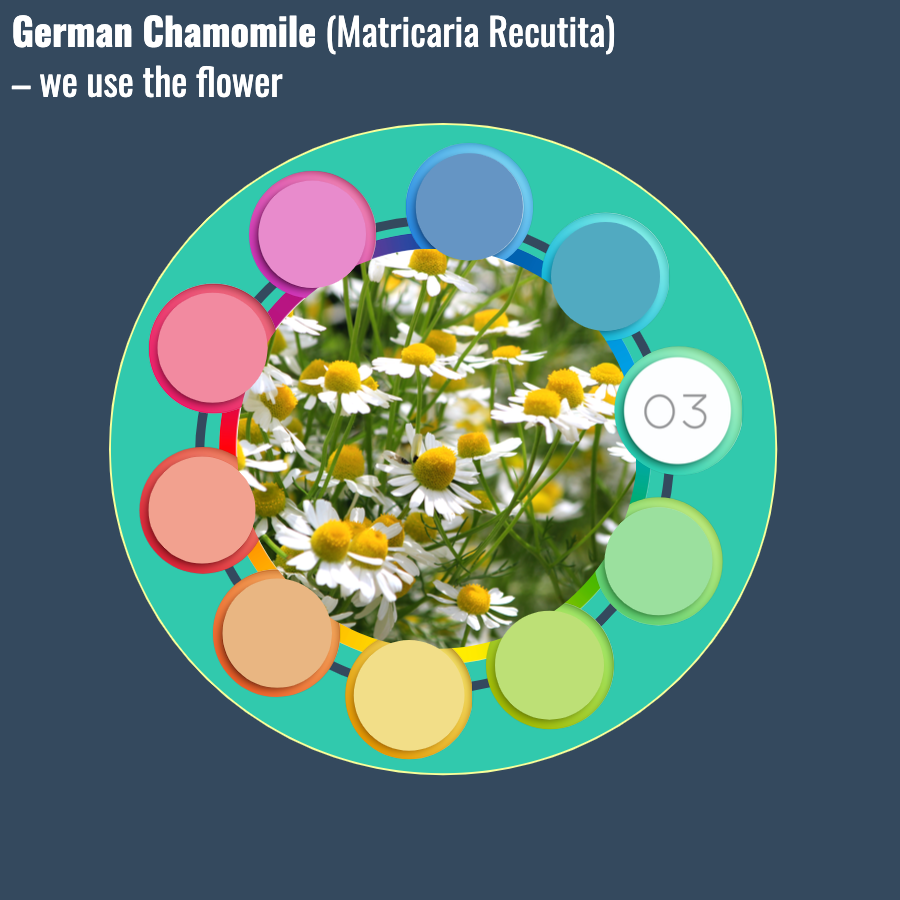 Matricaria Recutita or more commonly known as German Chamomile, has long been used for its gentle & powerful relaxation from anxiety.

As an anti-inflammatory15, the herb eases irritated, spastic smooth muscles in the digestive tract and assists with cramping. Chamomile is particularly helpful in dispelling gas and relieving constipation and indigestion. It possesses anti-oxidant, anti-secretory and anti-spasmodic activities.16

Recent findings confirmed chamomile’s use in traditional medicine as a potent anti-diarrheal.17 It also inhibits Helicobacter pylori, a bacterium linked to stomach ulcers.18

Chamomile has both carminative and spasmolytic effects, making it one of the most useful medicinal herbs in acute gastric diseases. The flower heads contain flavonoids, which contribute to the spasmolytic activity and is therefore used in painful gastrointestinal spasms as well as acute gastritis, ulcers, and dyspepsia (spastic complaints of the upper gastrointestinal tract).19 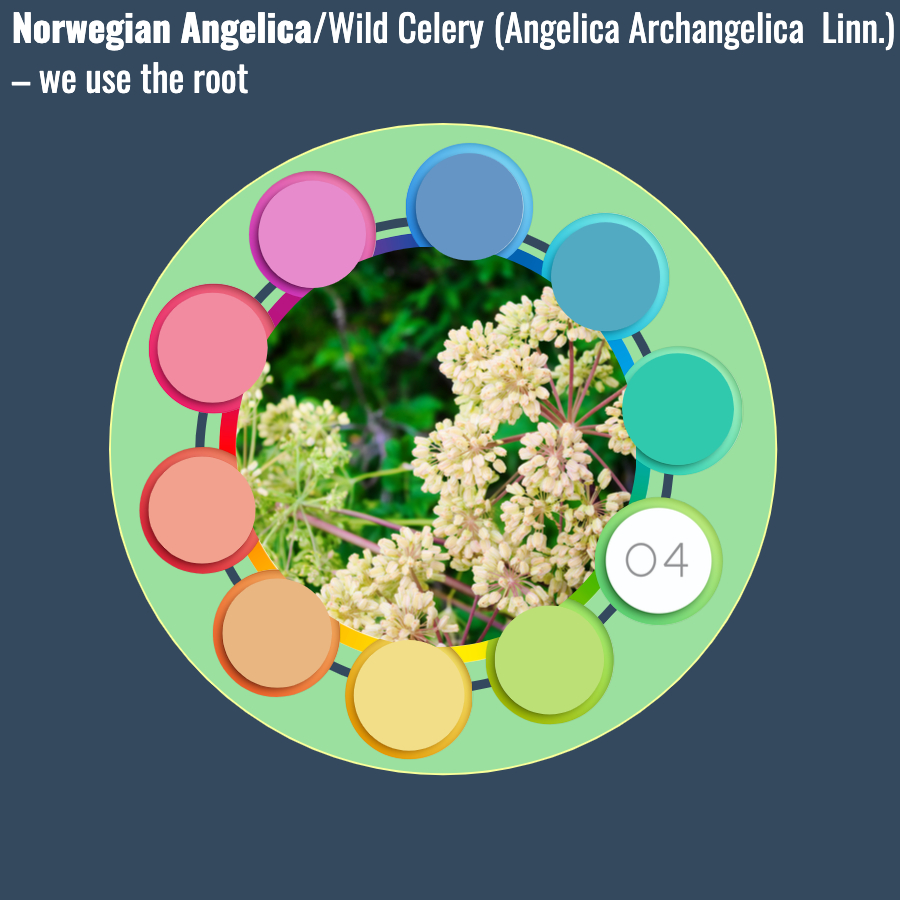 Because it is a bitter herb, ingesting it assists in bile production necessary for digestion. Angelica (holy or angel plant) has been used traditionally as a digestive tonic, and is one of the most respected medicinal herbs in Nordic countries.

The British Herbal Pharmacopoeia describes the actions of Angelica as ‘spasmolytic, diaphoretic, expectorant, bitter aromatic, carminative, diuretic’ and says it is indicated for, amongst other conditions, dyspepsia. Angelica showed anti-ulcerogenic activity20 against gastric ulcers and antitumor effects in breast cancer.21 Angelica root has an excellent anti-inflammatory profile.22 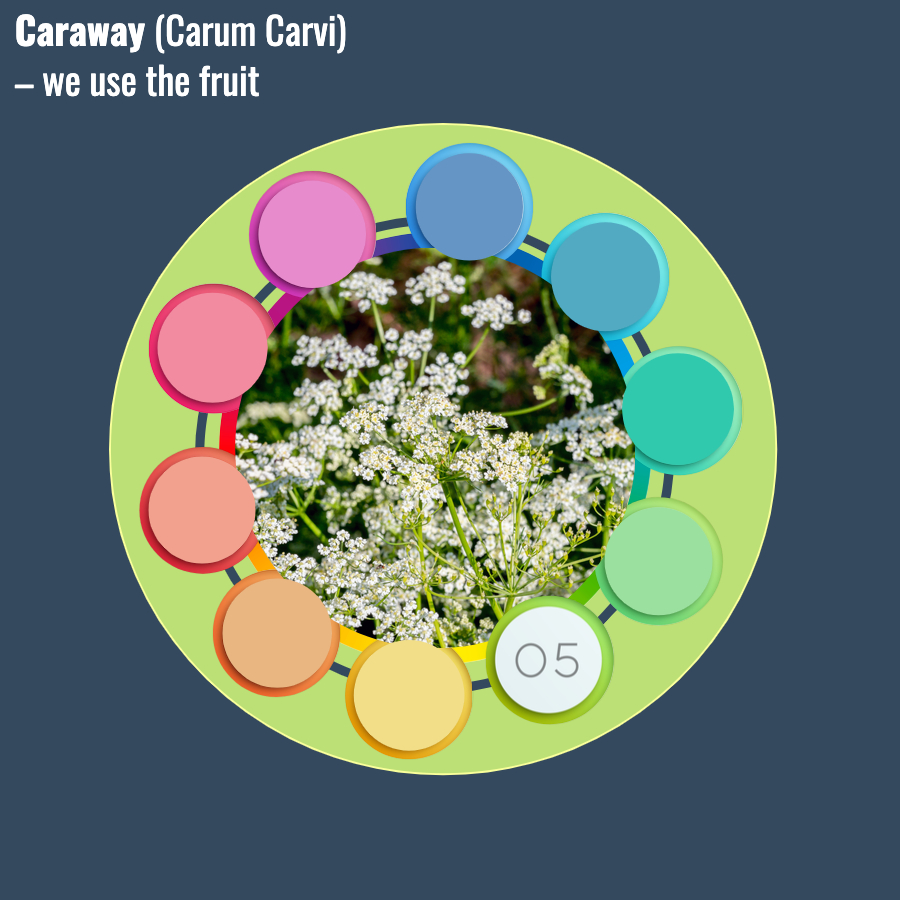 Caraway is a much-loved family herb in many traditional cultures, and a particularly key remedy in the treatment of infant colic.23

According to the Journal of Chemical and Pharmaceutical Research, the plant exerted many pharmacological activities, such as anticancer, antioxidant, analgesic and diuretic. Caraway relieves gastrointestinal cramps, flatulence, indigestion and symptoms associated with irritable bowel by smoothing muscle contraction, especially when used as a herbal preparation.24 It has sown effective in relieving dyspeptic symptoms. Caraway protects the colon by stimulating the tone of gastrointestinal smooth muscle, increasing mucus secretion19 and shows antimicrobial and antifungal activity.25 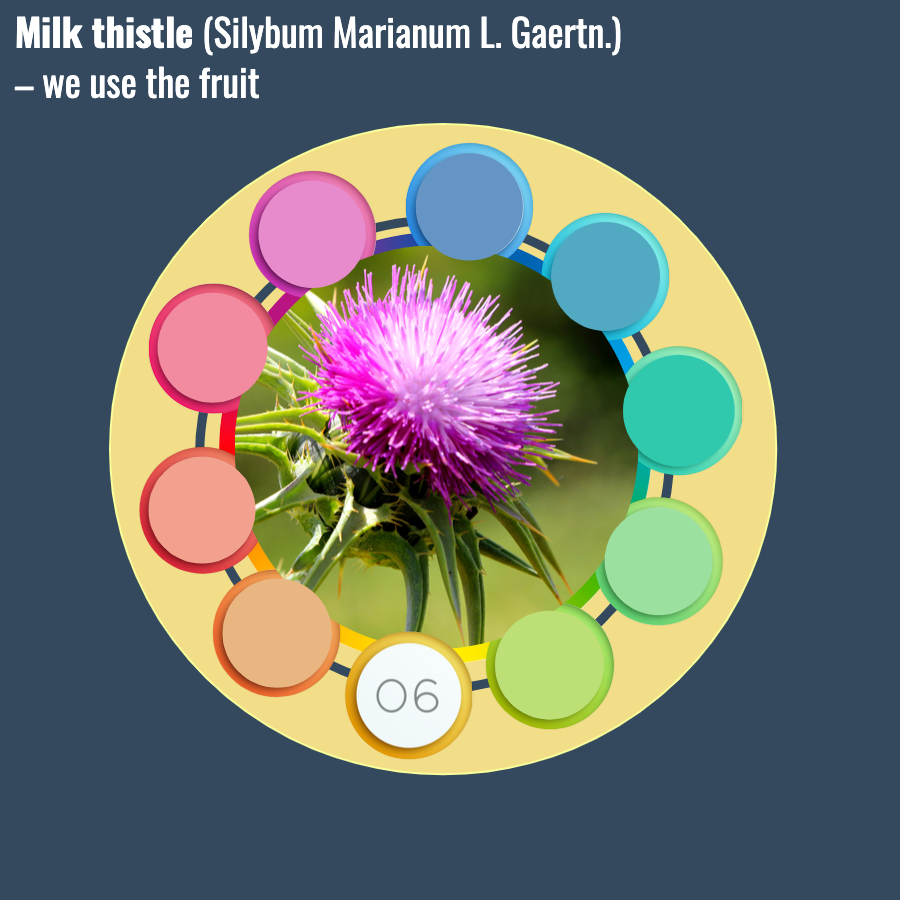 This thorny herb’s fruit contains a series of bitter-tasting chemicals that work to stimulate the production of bile in the liver and the release of bile into the duodenum.

Poor bile release or production, results in symptoms like indigestion and flatulence or bloating.26 Milk thistle has anti-inflammatory27 and antioxidant activity as it modulates the immune response.28  It has long been used in the treatment of liver diseases and decreases the activity of tumor promoters.29 As an antioxidant, it protects against cell damage caused by free radicals and it may have the ability to destroy cancer cells.30,31 The German Commission E (Phytotherapy and herbal substances), recommends milk thistle for dyspeptic complaints. This may be possible due to the regulatory effect milk thistle has on cell permeability and stabilizing membranes. 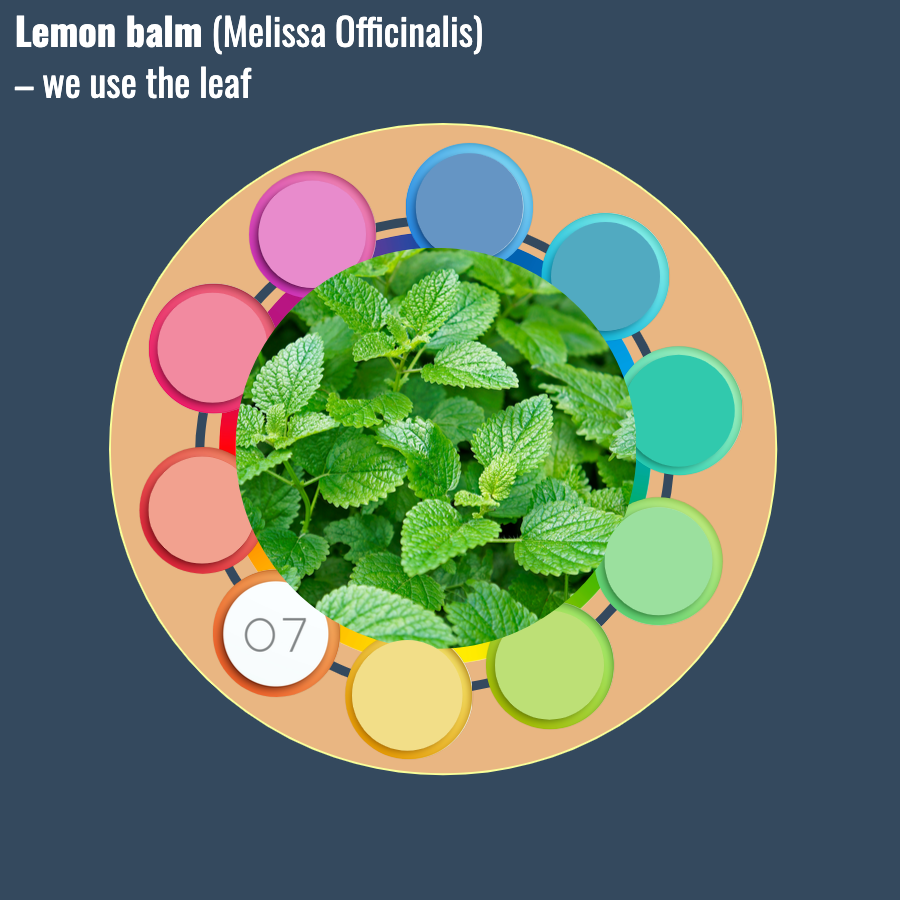 Lemon Balm has many properties and is used by phytotherapists to treat colic, spastic colon,16 cramps and flatulence.

According to herbologist Michael Tierra, lemon balm calms the nervous system. The leaves have been used traditionally as a mild sedative and in Iranian folk medicine for their digestive, carminative and antispasmodic properties, as well as for functional gastrointestinal disorders.32

Its antimicrobial (antiparasitic, antibacterial, antiviral, etc) potential  and noteworthy activity as an antifungal against Candida albicans, has just been demonstrated.33Lemon balm possesses high antioxidant activity and is effective in preventing and treating oxidative stress-related diseases. 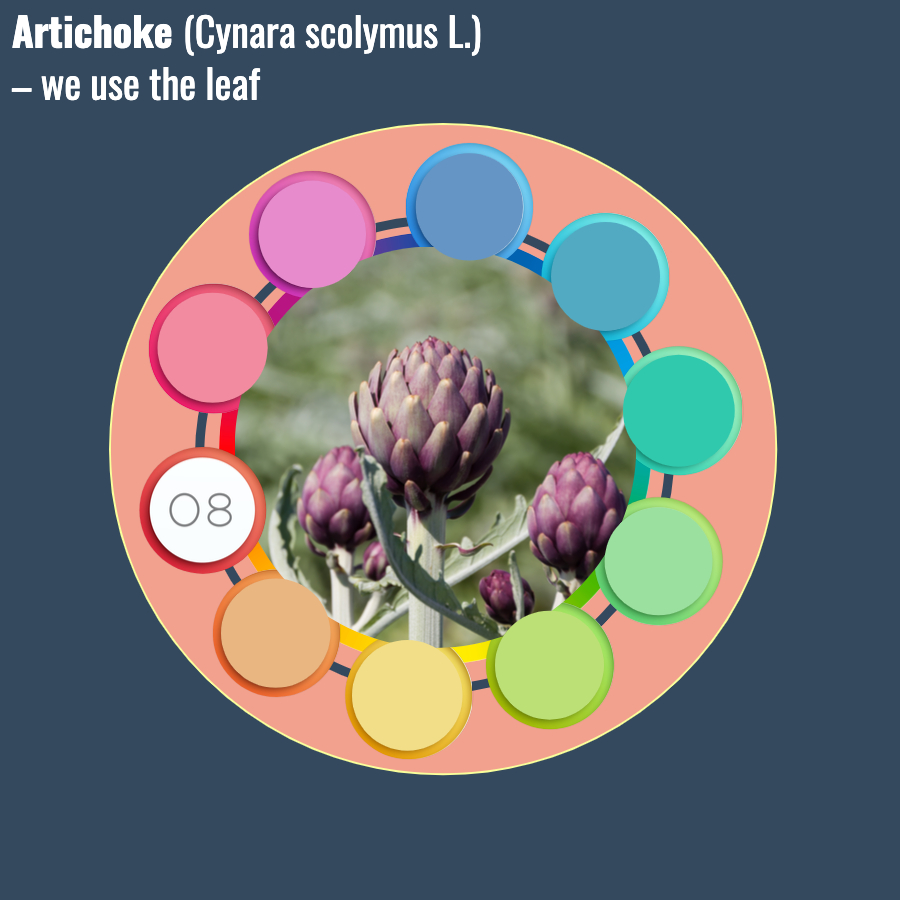 Artichoke extract helps stimulate the production of bile – a very important factor to keep the digestive process healthy – as demonstrated in vitro studies.34 The leaf (the most studied component of artichoke) is used for the symptomatic relief of digestive disorders such as dyspepsia35 and also irritable bowel syndrome.36

In a study37 carried out at the University of Readingon those who suffer from IBS and dyspepsia, one in four patients showed a significant reduction in the incidences of IBS, including a normalisation of bowel movement. Even better results were observed in those with dyspepsia with a decrease in symptoms of gas, bloating and indigestion in over 40% of the cases.

It is an antifungal38 and is used in spastic states of the gastrointestinal tract.16 Artichoke is an antioxidant and has a positive effect on the pathway of the regulatory mechanism allowing repair of DNA damage.39 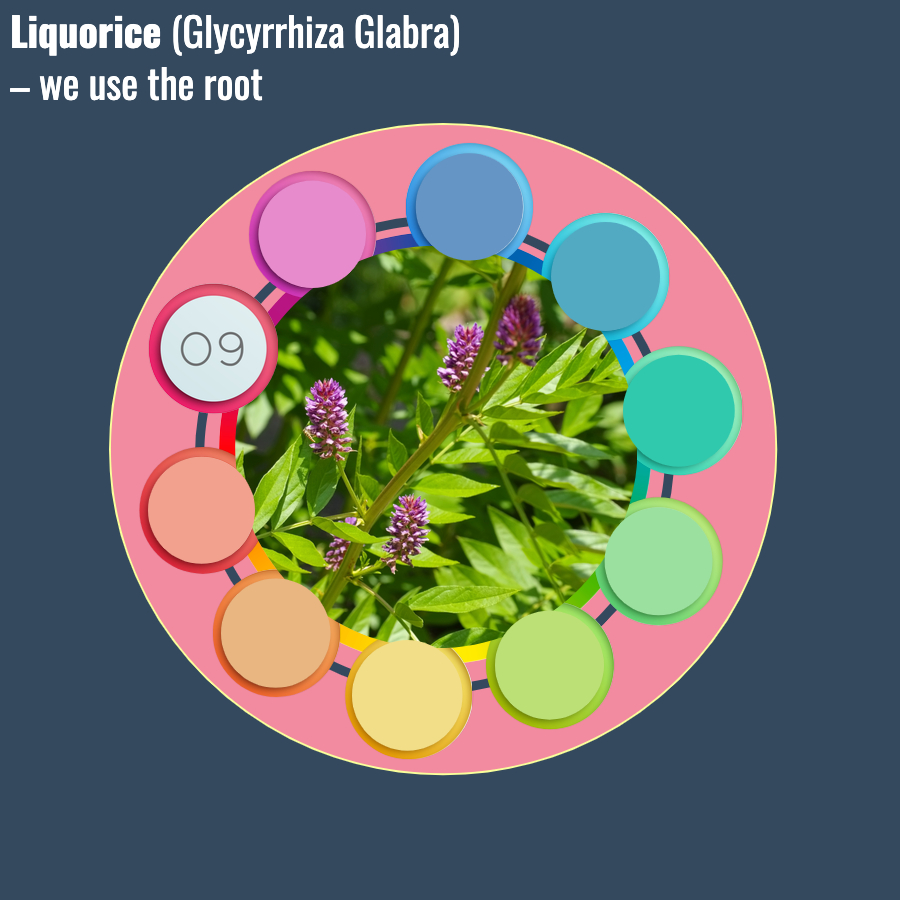 Liquorice is mainly known for its anti-inflammatory and mucosa-protective properties and its ability to reduce spasm of smooth muscle.16

Liquorice has a long history of use for dysfunctions of the gut barrier as it has the ability to soothe irritated and  inflamed sections the digestive tract.40  Several studies41,42 have shown the ability of liquorice to heal ulcers. This is done far more effectively than ulcer medications, by improving the protective lining of the intestines instead of reducing the acid needed for a healthy microbial balance and for the absorption of calcium. In another small study43 of 40 people who were referred for surgery because their ulcers were so severe, took 3g of liquorice for 8 weeks and 4.5g of liquorice for 16 weeks. None of the patients required surgical intervention during the year of follow-up.

It is now known that one of the leading causes of ulcers is the H. pylori bacteria. Liquorice possesses anti-H. pylori activity44 – 49 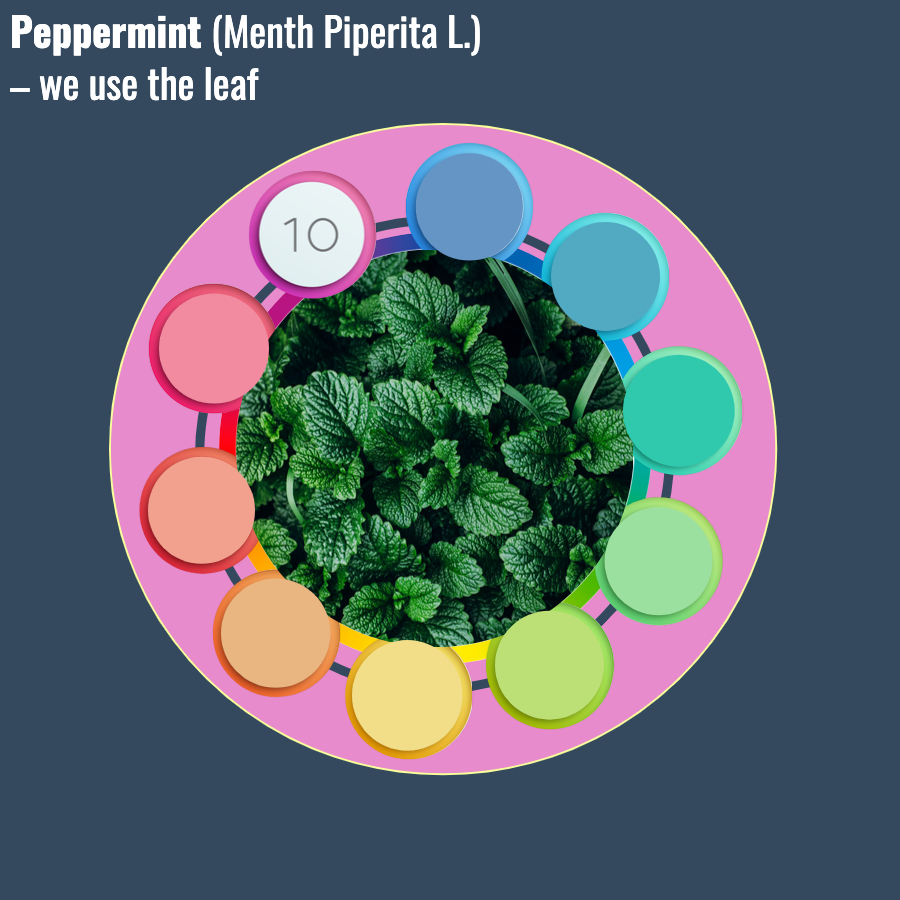 In folk medicine, according to WHO monographs, peppermint has been used for centuries in European countries, as a carminative herbal medicine, to treat diarrhoea, nausea and for the painful component of spasmodic colitis.50

In the Indian Materia Medica (Nadkarni’s 1982), infused peppermint leaves are used in cases of vomiting, gastric colic, cholera, diarrhoea, flatulence and to strengthen a weak digestion. The British Herbal Compendium noted the action of peppermint leaves as carminative, spasmolytic and choleretic (Bradley 1992).

Peppermint is a popular remedy to decrease of frequency and duration of the episodes of infantile colic. Peppermint calms the stomach muscles and improves the flow of bile, according to the University of Maryland Medical Center (UMM). This makes it suitable for people who have indigestion. The UMM notes that peppermint may kill some types of viruses, fungi, and bacteria. The antioxidant capacity and significant antiviral activity of peppermint has been determined.

Scientific studies have suggested that peppermint, in various forms, can help treat abdominal pain in patients with diarrhea due to irritable bowel syndrome (IBS).51 A study published in the British Medical Journal (BMJ) concluded that peppermint was helpful as an antispasmodic in treating IBS.52 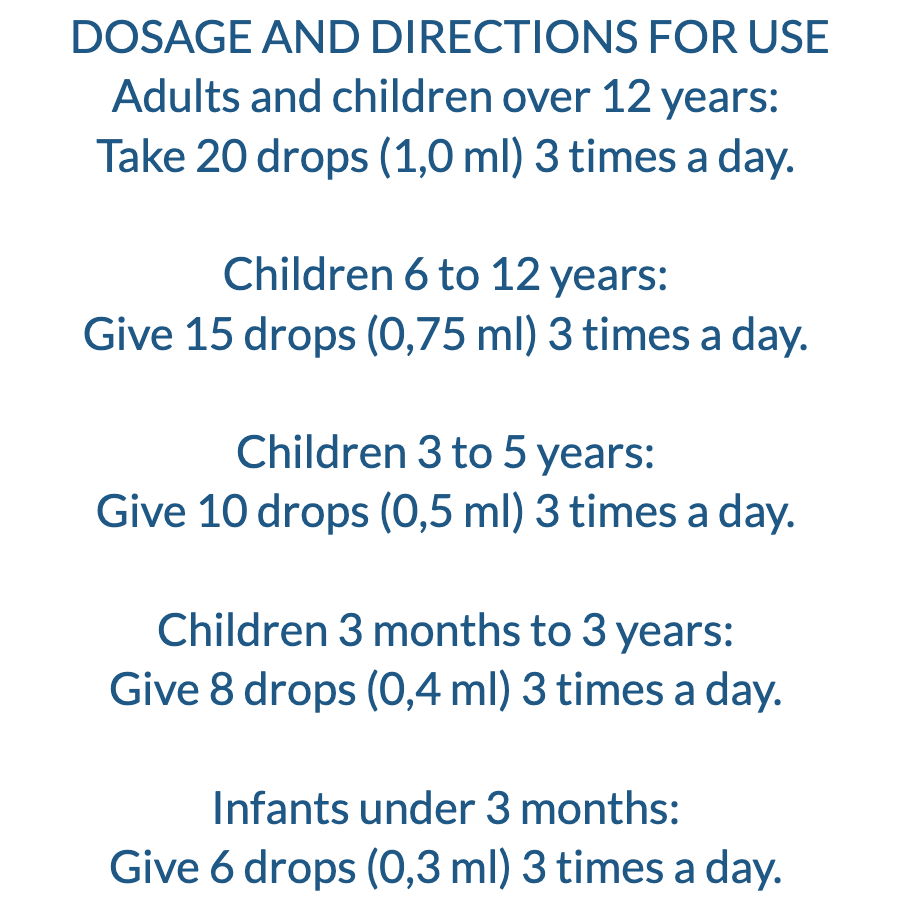 MORE PRODUCT REVIEWS IN THIS RANGE: 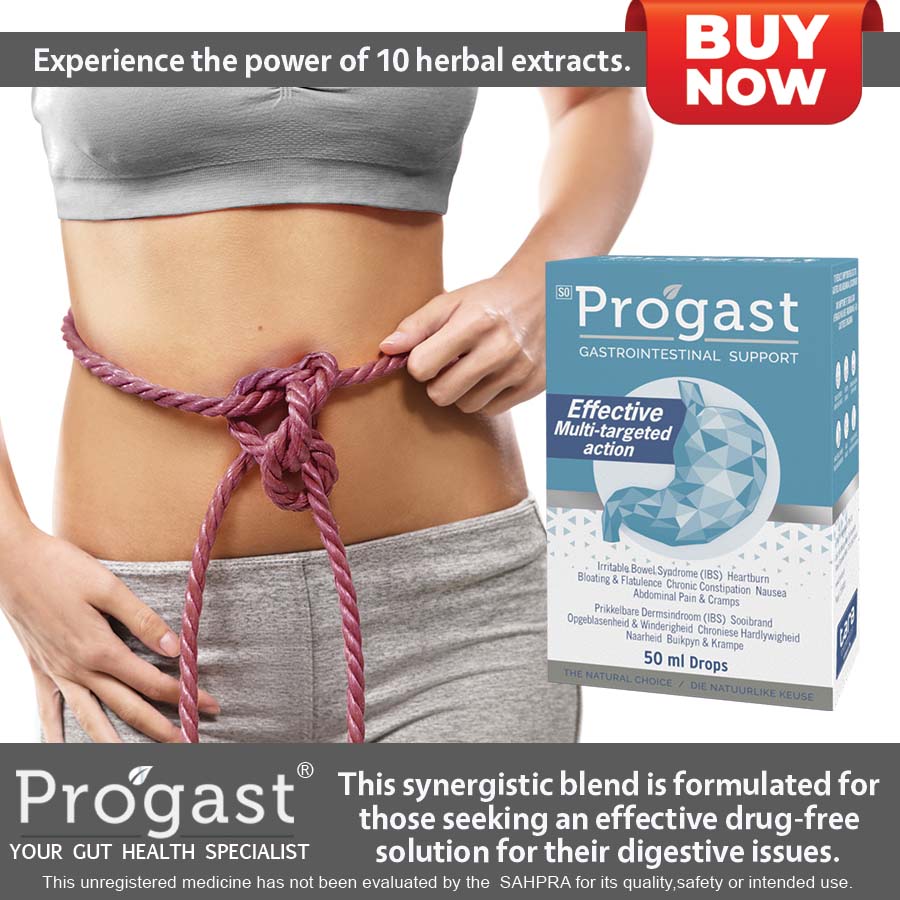