Solutions for baby with colic – AN OSTEOPATH’S VIEW 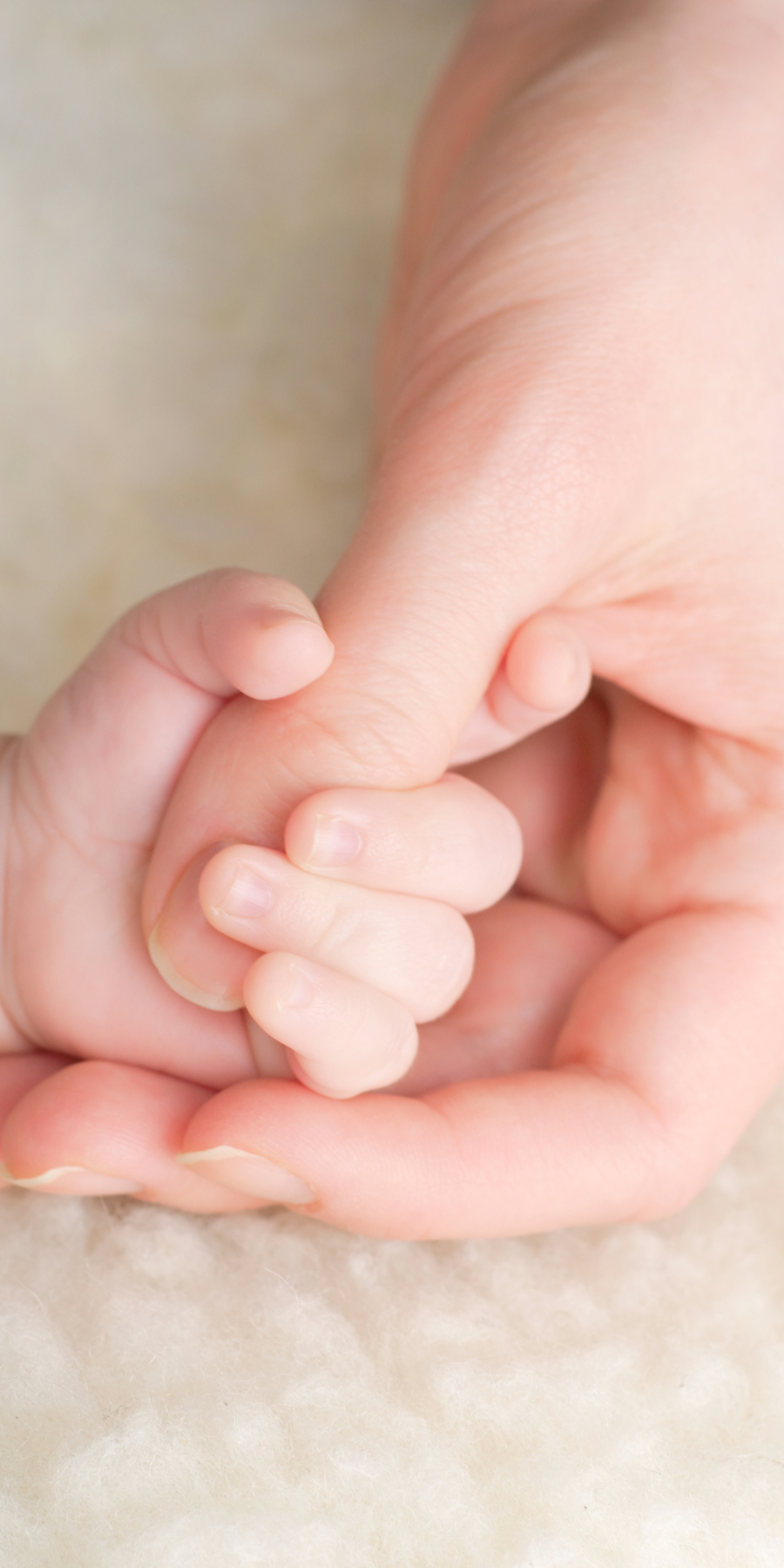 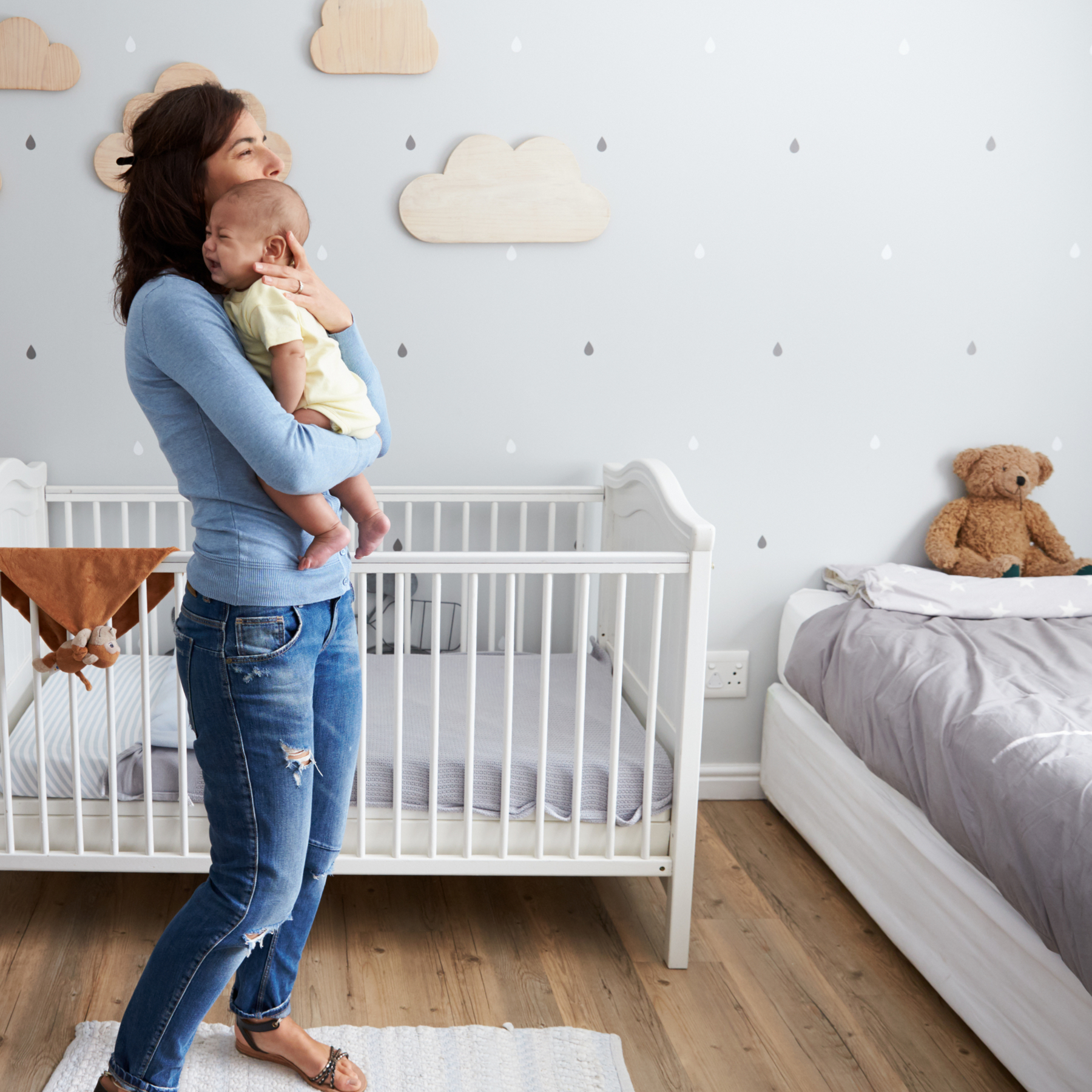 The term colic is derived from the Greek kblikos, meaning ‘in relation to the colon’. Infantile colic is a very common disorder, defined as distress or crying in an otherwise healthy infant that lasts for more than 3 hours a day, for more than 3 days a week, for at least 3 weeks. The cause is unknown. How can you help your baby with colic?

As parents know only too well, the baby with colic typically presents with excessive crying or irritability that does not respond to soothing. The bouts of screaming are commonly concentrated in the late afternoon and evening (just when you are trying to cook supper) and are prolonged, unpredictable and spontaneous. Signs of abdominal discomfort include abdominal distension, pulling the legs up to the belly, excessive gas, clenched fists, and facial expressions indicating anguish. Colic usually starts in the first month of life and may persist until 3 or 4 months of age.

Common theories concerning the disturbance of function involved are wide-ranging and a variety of factors have been suggested, from food sensitivities to gastro-intestinal tract and nervous system immaturity, reflux oesophagitis (immature sphincter development), inexperience of parents and maternal postnatal depression. While the term infantile colic was probably originally used because the symptoms are similar to those of adults with intestinal colic, it does not imply that any underlying abnormality is present.

Foods eaten by the mother may cause or aggravate colic in a breastfed infant. Check your diet to see if you can identify any of the common triggers – dairy (through the lactose in cow’s milk and dairy products), soy, chocolate, coffee, spicy foods, nightshades (tomatoes, peppers, aubergines, potatoes) citrus fruits, bananas and cucumbers can all be culprits. Gas-forming foods such as onions, beans, cauliflower, broccoli and Brussels sprouts can also make colic worse, so turn detective and eliminate or rotate possible irritants.

It has been suggested that some babies have actual lactose intolerance and an allergy to cow’s milk protein that causes colic. This is subject to debate, however, because no data support this claim. Changes of infant formula, although commonly tried, are rarely helpful. Unfortunately, and sadly far too often, breastfeeding is thought by mother or health professional to be inadequate and supplements are started. If the baby is thriving, and often when he or she is not, artificial feeds are of no benefit, and mother and baby discover this too late when lactation has ceased.

If your baby is bottle-fed, avoid soy milk formula. Soy milk may cause gastro-intestinal disturbance and has been reported to be detrimental to a developing child’s health, despite claims that it is good for you. 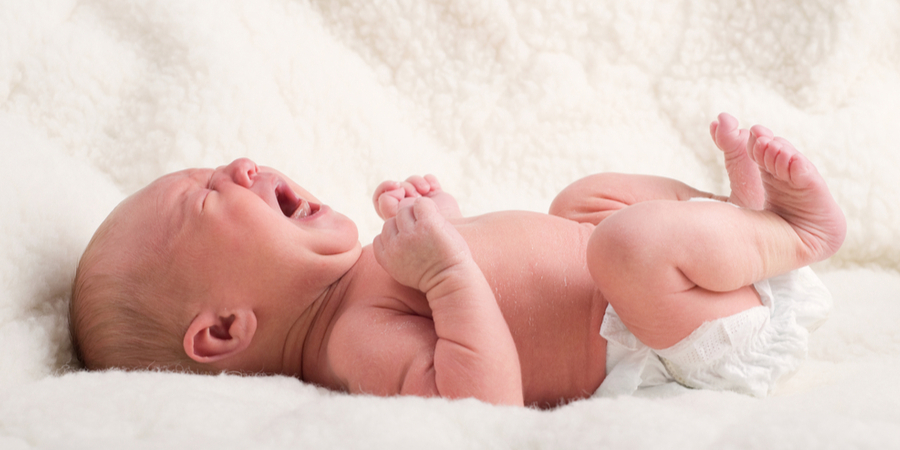 SOLUTIONS FOR BABY WITH COLIC

There is currently no generally accepted medical treatment for colic, and the approach taken by medical professionals varies substantially from country to country and indeed from doctor to doctor.

Herbal tinctures and teas, particularly those that include fennel, along with dill, chamomile and other herbs with purported digestive health benefits, have been used. These are primary ingredients in gripe water, which is believed by some to relieve the symptoms associated with infantile colic.

Studies have found success with probiotics, which were intended to reduce gas.

There are several homeopathic remedies available. These little pills are said to have an incredibly soothing effect, helping the baby to relax, calming the intestines and relieving gas (assuming of course that the baby does have colic). Grind one pillule between two teaspoons and put it into the baby’s mouth, where it will dissolve. 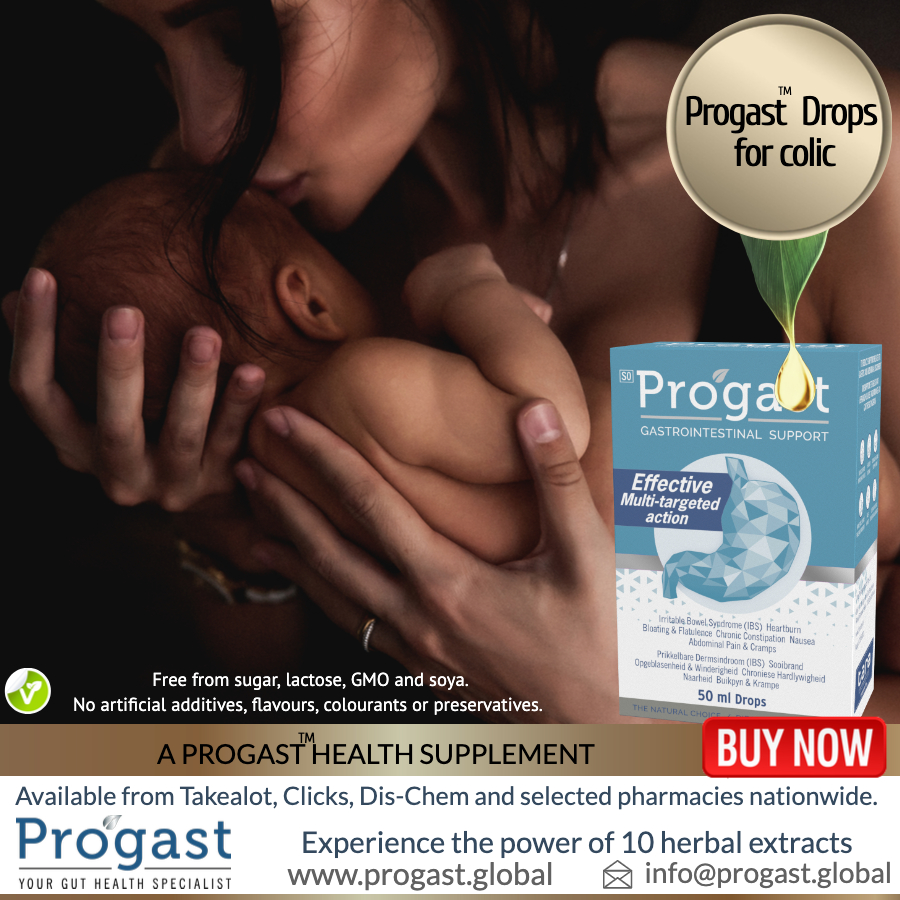 In my capacity as an osteopath, I would also consider several other factors and treat accordingly. Paediatric osteopathy is based on the principle that all ailments – whether minor or serious – are a result of an imbalance somewhere in the network of the body’s systems.

After making a diagnosis following a full medical history and examination (it is important to perform a thorough physical examination to rule out other causes for persistent crying, such as infection or intussusception), a paediatric osteopath will use refined and subtle manual techniques to bring about profound changes within a child’s body through gentle manipulation. These will enable the musculoskeletal system, gastrointestinal tract, nervous system, immune system and circulatory system to work effectively and optimally, allowing reduction of the colicky signs of discomfort and crying. The treatment uses no drugs, and is noninvasive.

It is clear that a colicky baby’s surrounding anatomy plays a role in gastro-intestinal function. Structural restrictions in the upper trunk (thorax), abdomen or pelvis are often related to irritable bowel, constipation or dietary sensitivity. Restrictions in these areas will frequently manifest as colic in a baby. For example, the diaphragm can be affected by the stress of the body’s passage through the birth canal, by shock from the birth, or by a poor first breath. Any impairment in the function of the diaphragm has a major effect on the stomach. Tension on the umbilical cord during delivery, perhaps because it was wrapped around the baby’s neck, can also disturb function of the diaphragm.

Frequently there is also compression and tension at the base of the skull and upper neck, which irritates the nerve to the stomach (vagus nerve) that exits from the skull via the jugular foramen. This area is vulnerable to compression, even during a normal birth. Retained compression here can irritate the nerve and interfere with digestion in the stomach.

Restrictions of normal movement in the musculoskeletal system affect the autonomic nervous system. The resulting state increases the intestinal sensitivity, and hypersensitivity or dysfunction follows. Pain perception is thought to be mediated by the spinal nerves, and treating these areas with osteopathy may help balance gut function in a colicky infant.

In babies, gastro-intestinal motility and function are immature. Increased transit times and immature hormone and enzyme function may promote the production of intestinal gases. Restrictions or irritation of the nerve controlling sucking (hypoglossal nerve) can also cause excess air to be passed into the gut. Gastro-intestinal membrane function may be irritated by excess air and cause an inflammatory response in the gut wall, affecting peristalsis, digestion and absorption.

Osteopathic reduction of facial connective tissue tensions and correction of alignment and motion of the joints will allow normal physiological function of the underlying anatomy. Treatment may include gently easing any strains within the cranial bones, soft tissues and surrounding upper neck as well as working through related parts of the spine (to affect related nerves of the gut) and diaphragm, chest and abdomen.

Colicky behaviour usually commences during the first four weeks of life in the full-term infant. This time frame corresponds with initial development of voluntary control of the muscles that support and lift the head at the back of the neck. Activation of these muscles may exacerbate minor tissue strains in this area. In my experience examination of a colicky baby usually reveals restriction or irritation of the spine which would cause a headache or spinal pain in an adult. These painful stimuli can generate a state of anxiety and irritability in babies as well as adults. 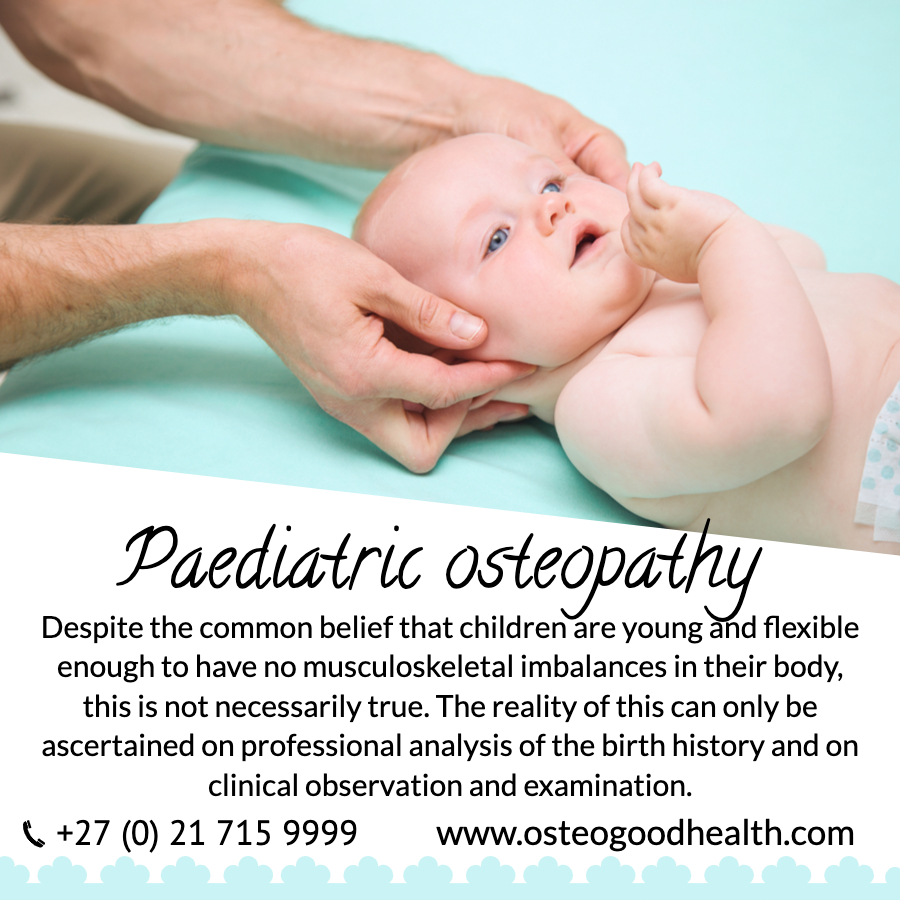 Another theory is that colic is caused by an immature or irritable central nervous system. The infant’s nervous system is still immature at birth and the ability to dampen down stimuli is poor, as is organisation of the sleeping and waking states. A normal adult or child’s nervous system has the ability to screen out stimuli. For example, as you are reading this article you are not thinking about the pressure of the chair against your buttocks, or the pressure of your feet on the floor, or the sensation of your clothes on your body, yet you are able to bring each of these sensations into your consciousness. If you try to continue reading while attending to these sensations, you will find the process quite annoying. Now imagine being a baby – after spending 40 weeks in a sensory deprivation tank, you have been pushed through a tight canal or pulled out of your cosy environment, and you are lying in a dry room with the unfamiliar feel of clothes and a nappy against your sensitive skin and strange noises in the background. Not an ideal scenario if your nervous system is immature!

A baby who has been subjected to stress in pregnancy via his or her mother will have a more reactive nervous system than other babies, and this is thought to contribute to the increased vulnerability to colic in these infants. When used to treat the mother, osteopathy is effective in helping to reduce maternal stress during and after the pregnancy.

The caregiver should be encouraged to create an environment of comfort, calm and relaxation for the infant. Holding the baby or carrying him or her in a sling close to the body can soothe, and secure swaddling occasionally helps. Getting the baby to relax will also have a calming effect on the caregiver that will in turn further relax the infant. Avoid active massage of the abdomen, which can be irritating, and ensure appropriate winding after feeds. Breastfeeding should be encouraged – colic is not a reason to stop breastfeeding! Check the feeding position to ensure that the baby isn’t swallowing too much air. Adjustments in the mother’s diet may help the function of the baby’s gastro-intestinal tract and immune system. She should ensure that she follows a well-balanced diet with no processed food and stimulants. In short, good advice is to keep the diet simple, and if you can’t understand the ingredients on the label – don’t buy the product!

If all else fails, parents can console themselves with the fact that the baby will almost certainly grow out of the colicky stage as his or her gastro-intestinal tract matures. If this doesn’t happen, osteopathic treatment is indicated to correct any musculoskeletal restrictions that may be preventing normal function.

Editor’s note: Read more as Dr Guy Ashburner shares his view on paediatric osteopathy as a natural therapy for colic in infants. 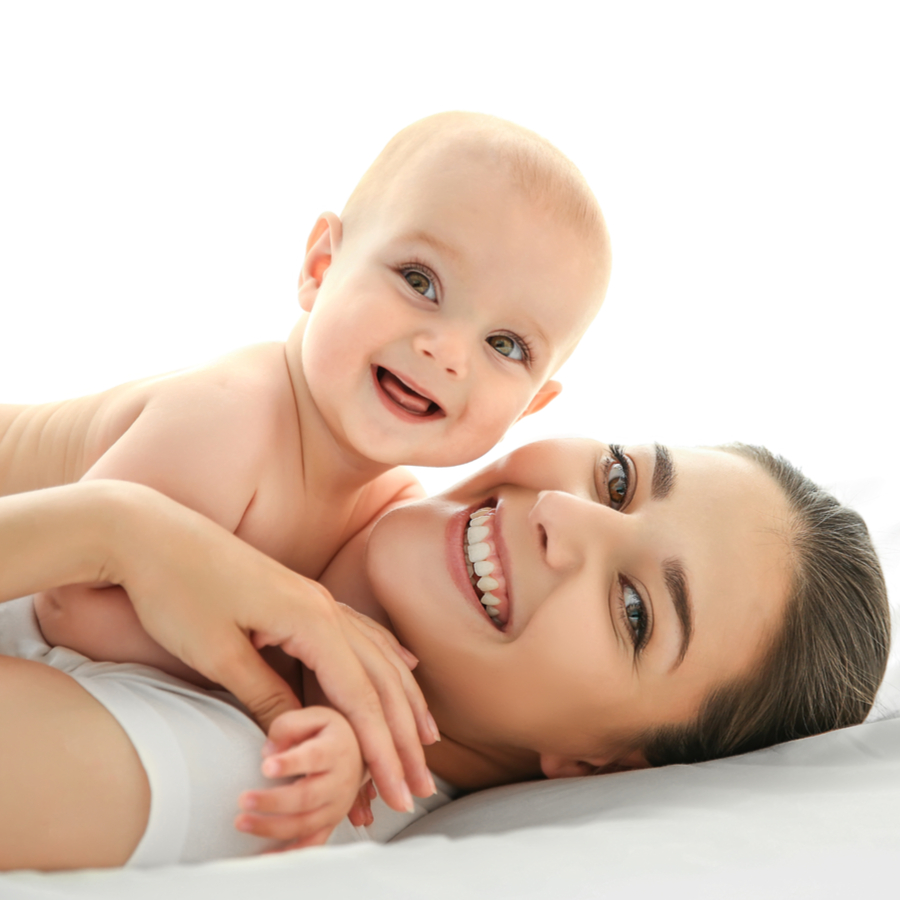 About the Author: Dr Guy Ashburner

Dr Guy Ashburner BSc(Hons)Ost(U.K.), D.P.O.(U.K.) Before graduating from the British School of Osteopathy, Guy qualified and worked as a personal trainer in Kensington, London. His interest in babies, children and cranial osteopathy led him to complete a two-year Diploma in Paediatric Osteopathy at the renowned Foundation for Paediatric Osteopathy in London of which he is a registered alumni member. His private practice in Cape Town embraces holistic osteopathic principles with focused rehabilitation for people of all ages. Visit https://www.osteogoodhealth.com/
Toggle Sliding Bar Area