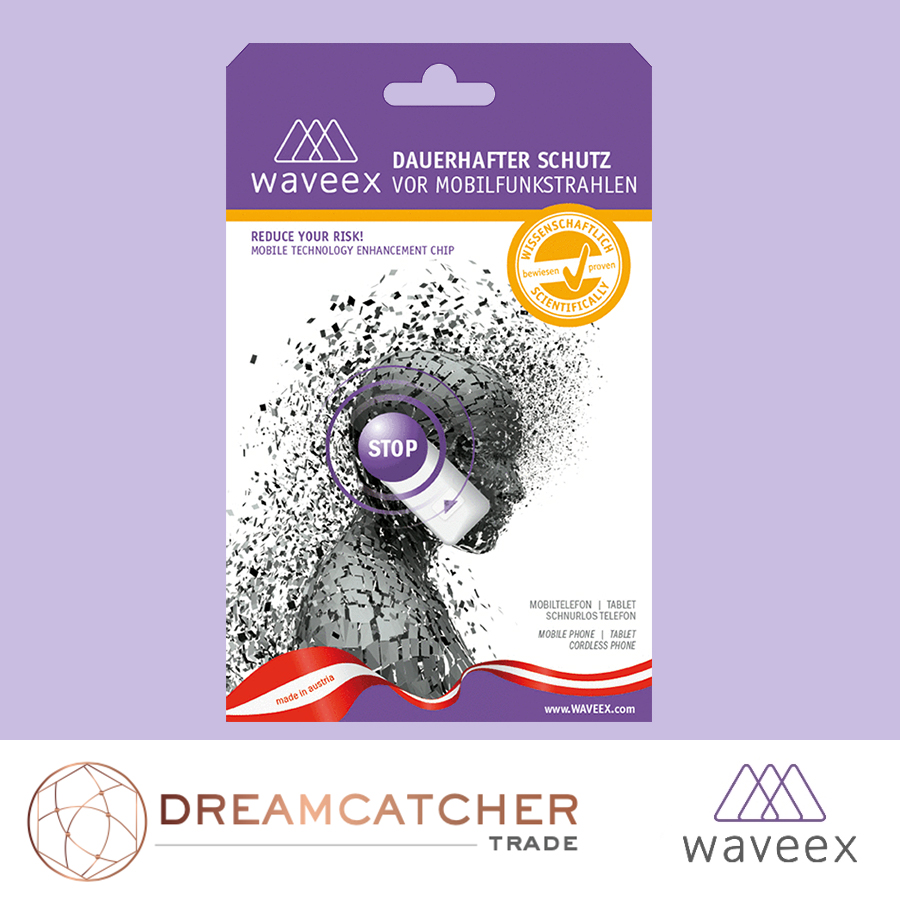 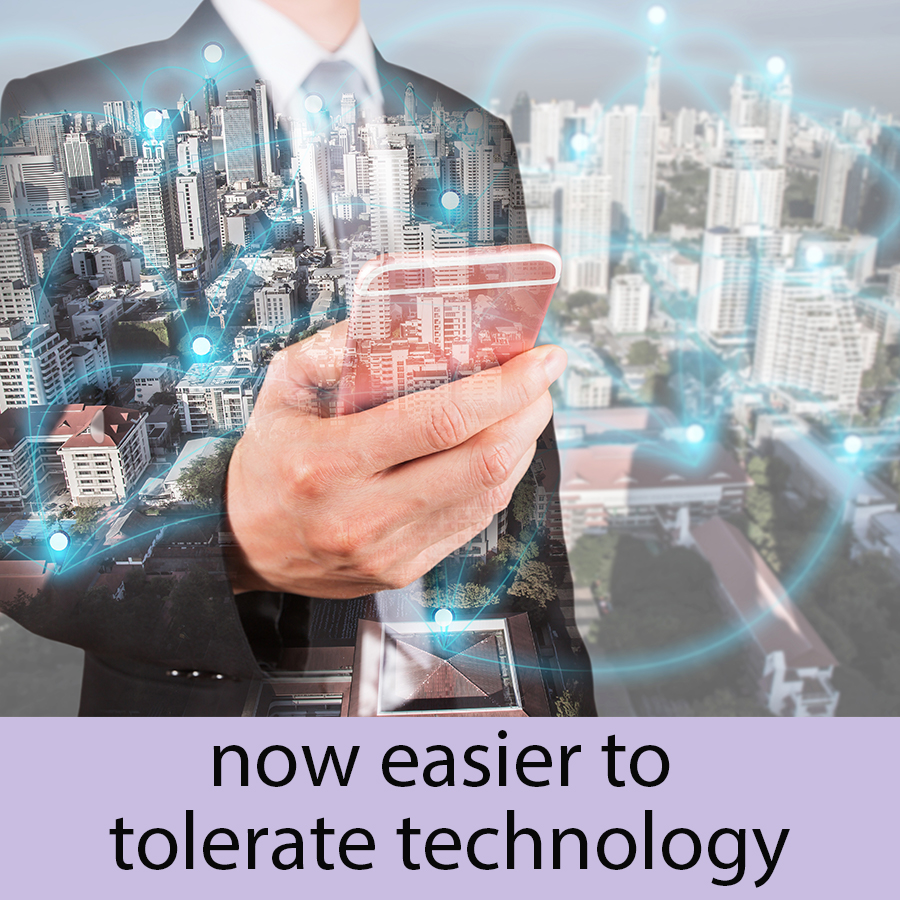 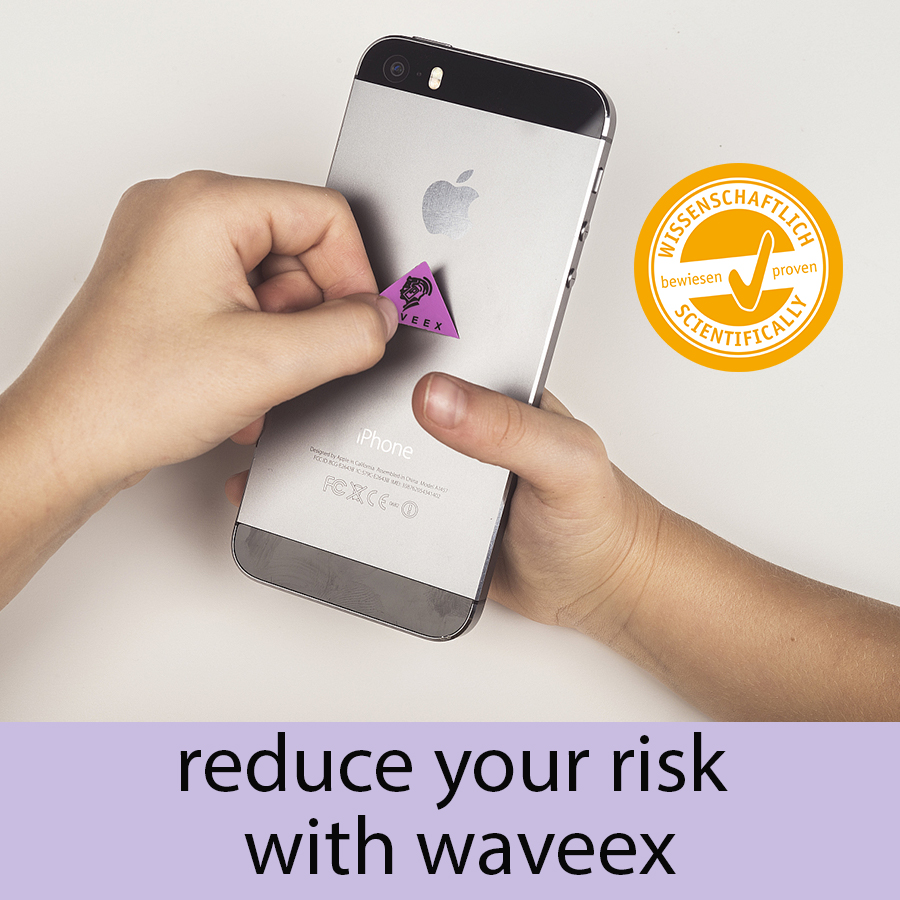 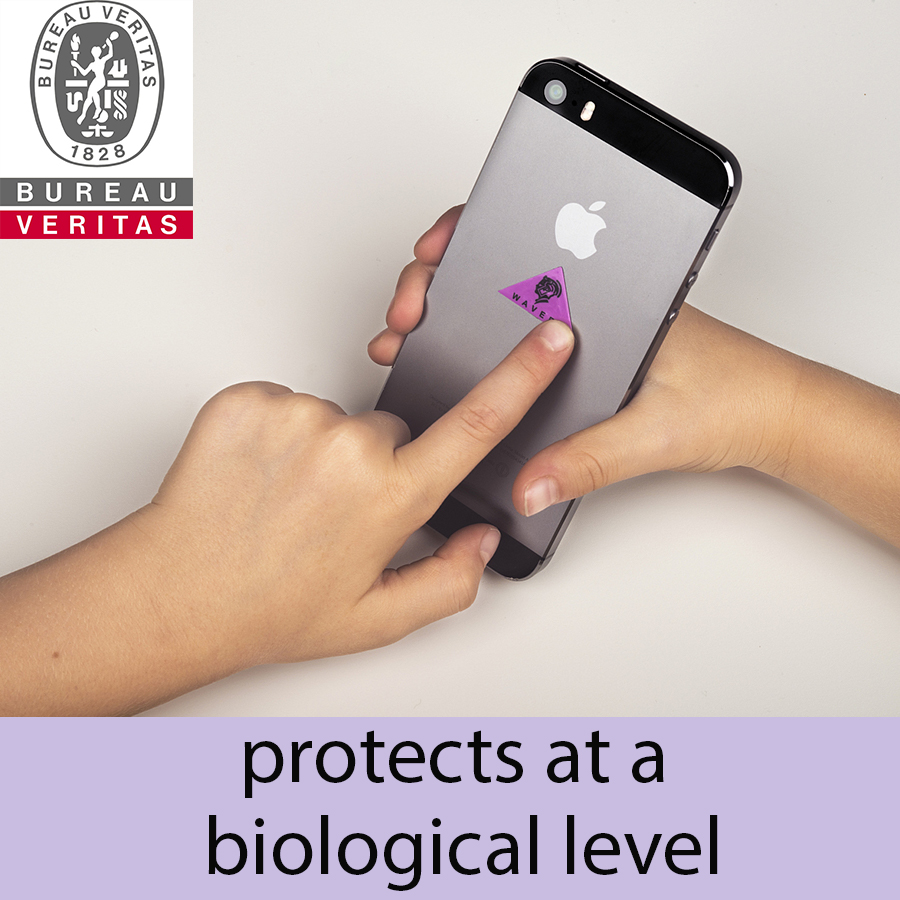 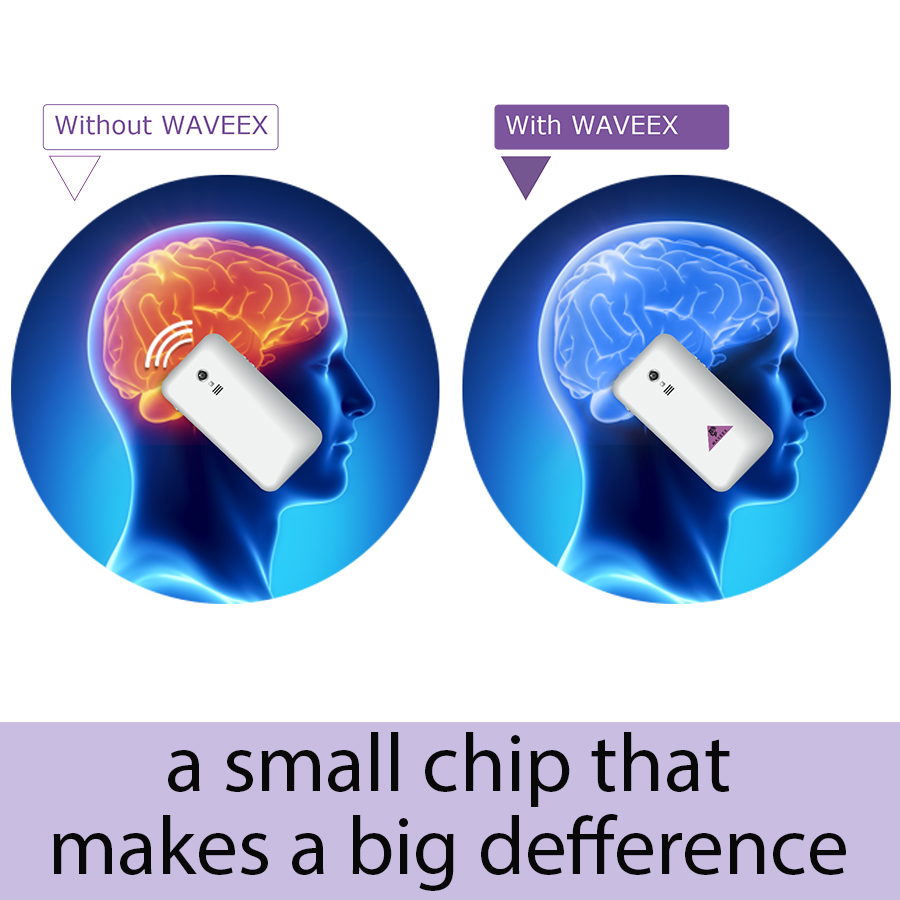 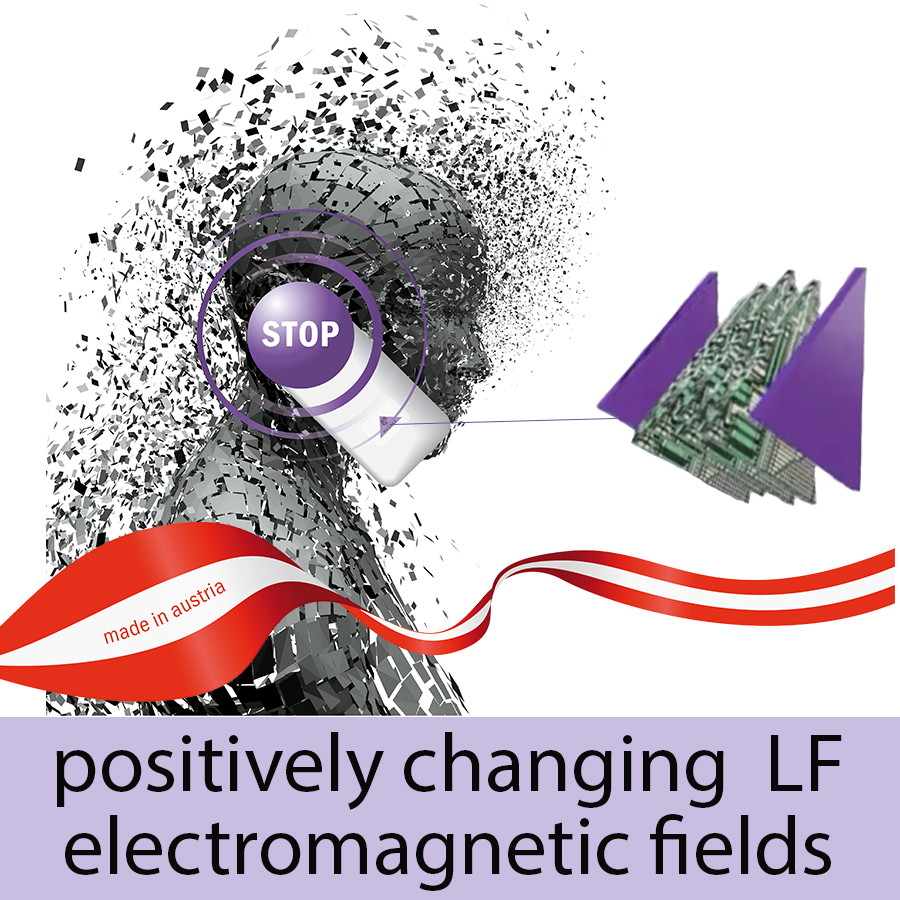 The Austrian product WAVEEX is the first product in the world ever to be able to claim that there is no more additional damage done to DNA when using mobile devices.

The legally defined specific absorption rate (SAR) only protects our bodies against the influence of high- (radio-) frequency radiation. Waveex is the only technology in the world that expands this protection to a biological level. This is possible by positively changing the low-frequency electromagnetic fields that are formed.

Extremely low-frequency electromagnetic fields of different strength disturb important biological processes in our brain, so that we stop the production of certain repair proteins and hormones. Over time, the body reacts and we feel stressed. Waveex smoothens magnetic field peaks, simulates a natural electromagnetic field and thus prevents genome damages. 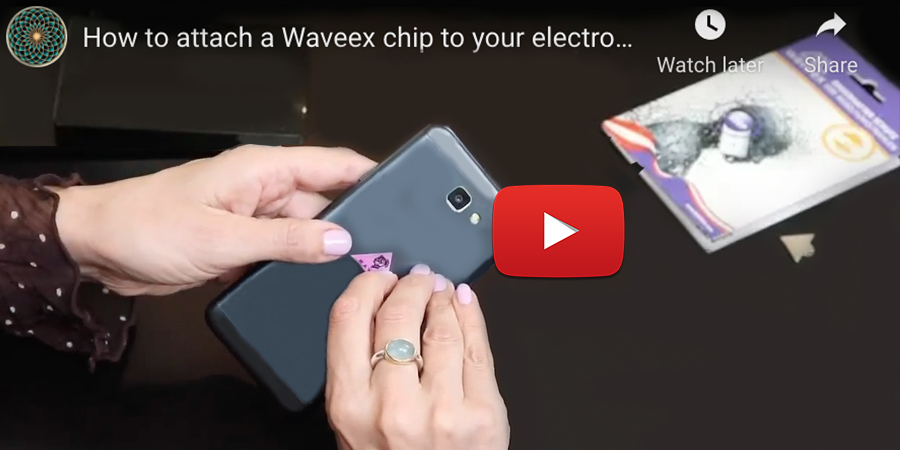 A recent Ukraine study investigated the effects of the Waveex chip on the biological activity of mobile phone radiation in quail embryos. The study group comprised quail embryos in ova (hatching eggs) and radiation levels were recorded at three stages:
(i) 38-hour embryos; (ii) 10-day embryos; and (iii) day old chicks. One group of eggs was exposed to a mobile phone without a Waveex chip, while the second group was placed in an identical position (three cm) below a mobile phone with a Waveex chip. A third group of eggs was not exposed to radiation (control group, no phone). The eggs were incubated in three separate incubators.

The researchers reported that the application of a Waveex chip to the mobile phone during the exposure resulted in a normalising/protective effect on oxidative status and DNA integrity in embryonic cells, and concluded: ‘These findings allow recommending Waveex chip as a promising approach to reducing adverse effects of mobile phone radiation for human health.’ 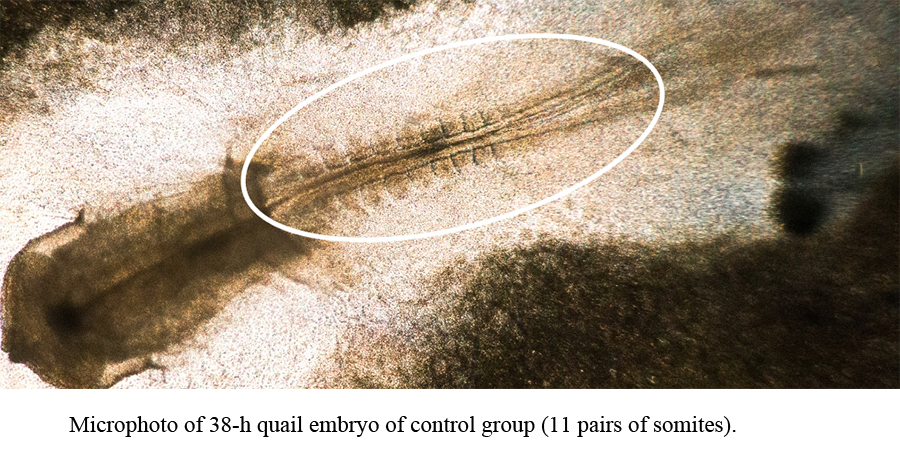 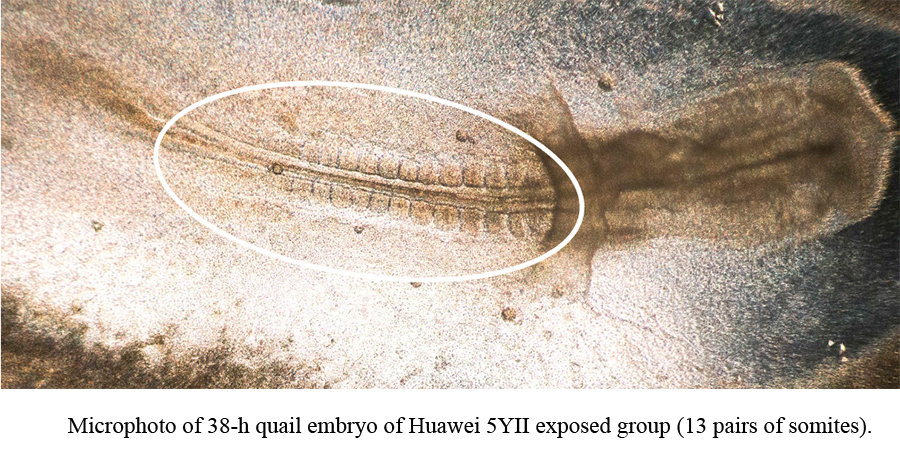 Phone calls create a low-frequency electromagnetic field in the close vicinity to the cell phone. However, its levels are inconsistent: it contains gaps and peaks – the so-called gradients. The gradients irritate the magnetite crystals in the brain and affect production of certain proteins and hormones. With the modified effectiveness of melatonin, for example, the immune system is weakened and DNA damaged.

There are circuits made of a silver finish on the interior layers of Waveex that disassembles these peaks into smooth progressions that make the electromagnetic fields tolerable for our bodies. By smoothing the magnetic peaks, the usage of new mobile technologies becomes permanently easier for our bodies to tolerate. This has been proven scientifically as well as medically.

It is the structure of the information on the wave that is positively altered by the Waveex device. It works on every device which emits radio frequency and operates on DC and where you can access the converter or the battery: e.g. cell phones, in-house cordless phones, WiFi routers (on the converter), laptops, tablets, cameras etc.

‘We are persuaded that the Waveex chip can protect mobile phone users against harmful radiation.’ Bernd-Bruns (Institute of Natural Medicine in Wiesbaden)

The chip meets the effectiveness and stability criteria also after the endurance test by magnetic incubation. 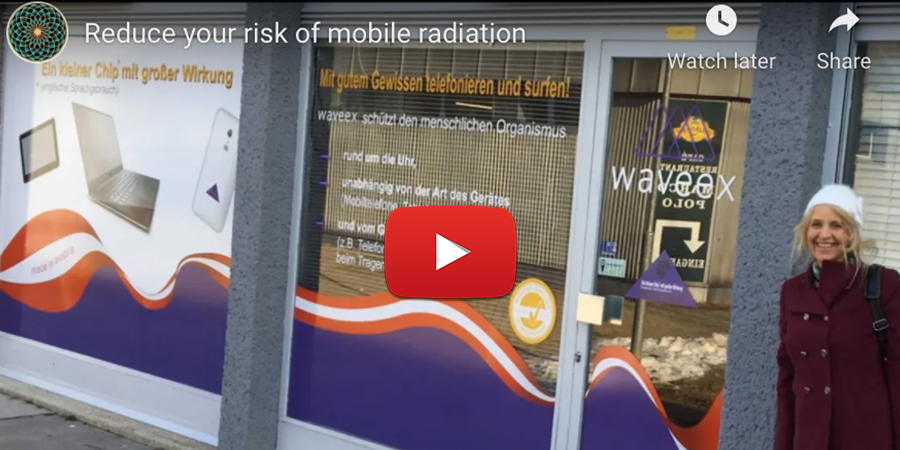 How is Waveex installed on a mobile telephone and tablet?
This is very easy to do. First, thoroughly clean any grease and dust from the surface. Then pull off the film and firmly press Waveex directly on or as close as possible to the battery or other power supply. If you attach Waveex to the exterior, you can cover it with the enclosed protective film.

Attach Waveex to the base station on the power adapter for cordless telephones via wireless technology (DECT). Attach it to the mobile part the same way you would attach it to a mobile phone.

Attach Waveex to the power supply, where the cable goes to the wireless router. NOT on the rooter itself.

Do not remove the sticker and transfer to another device. We cannot guarantee the circuit will stay intact. 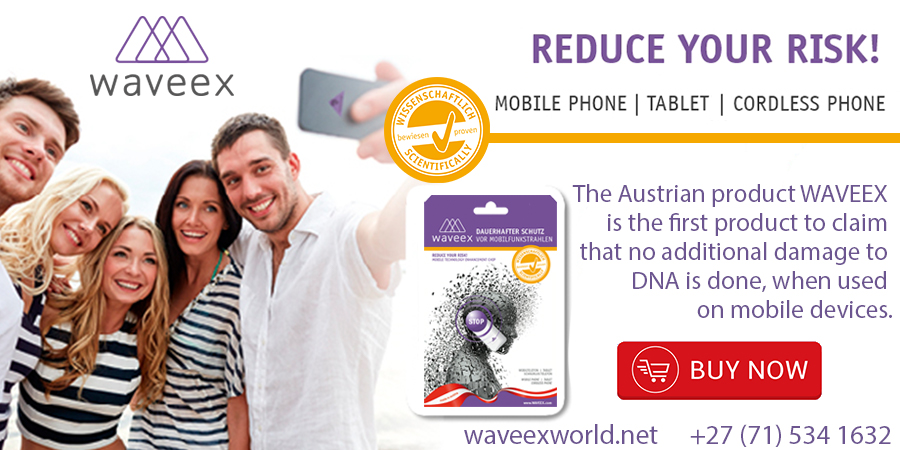 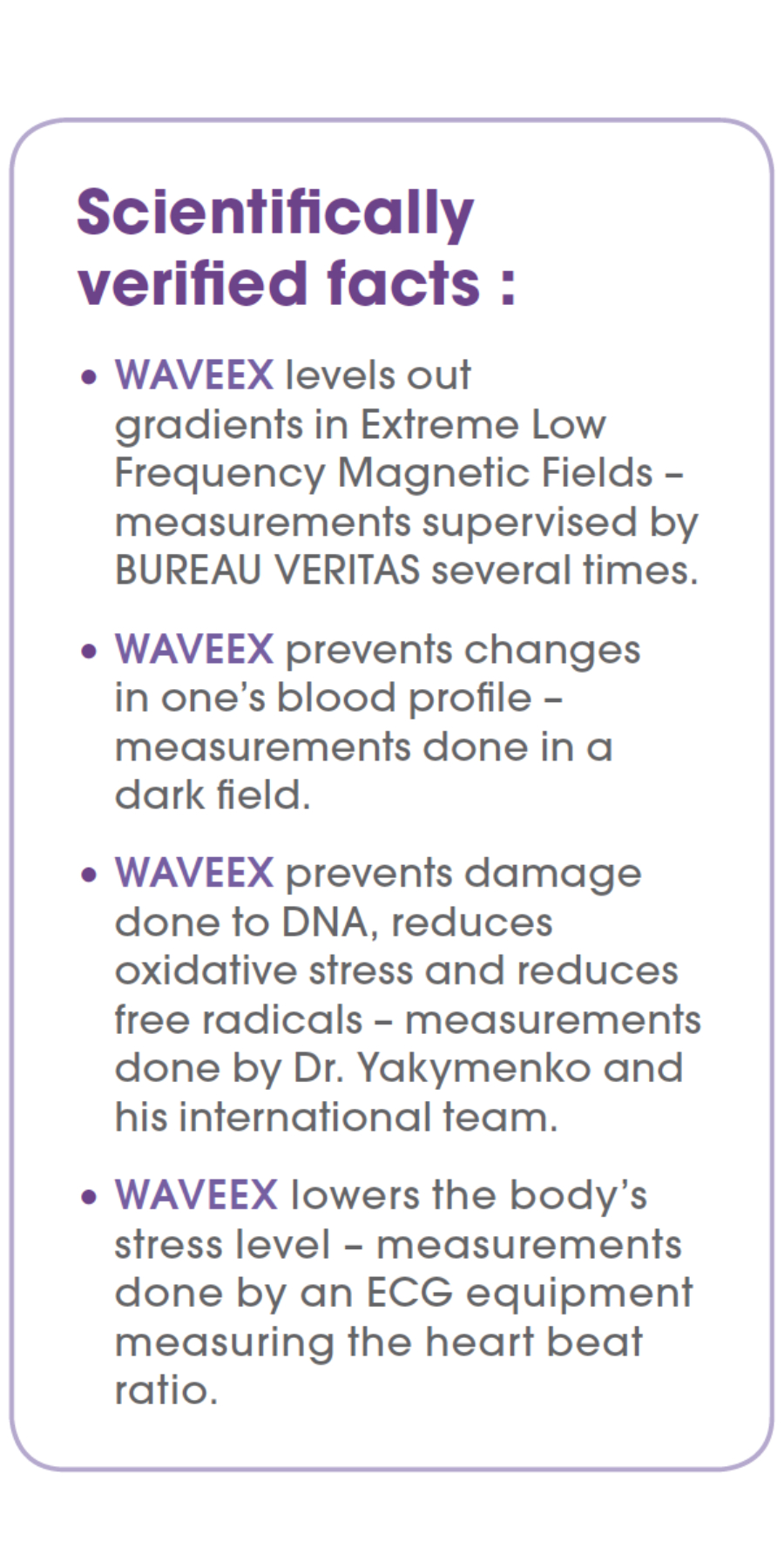