The Healing Power of Beethoven’s Music 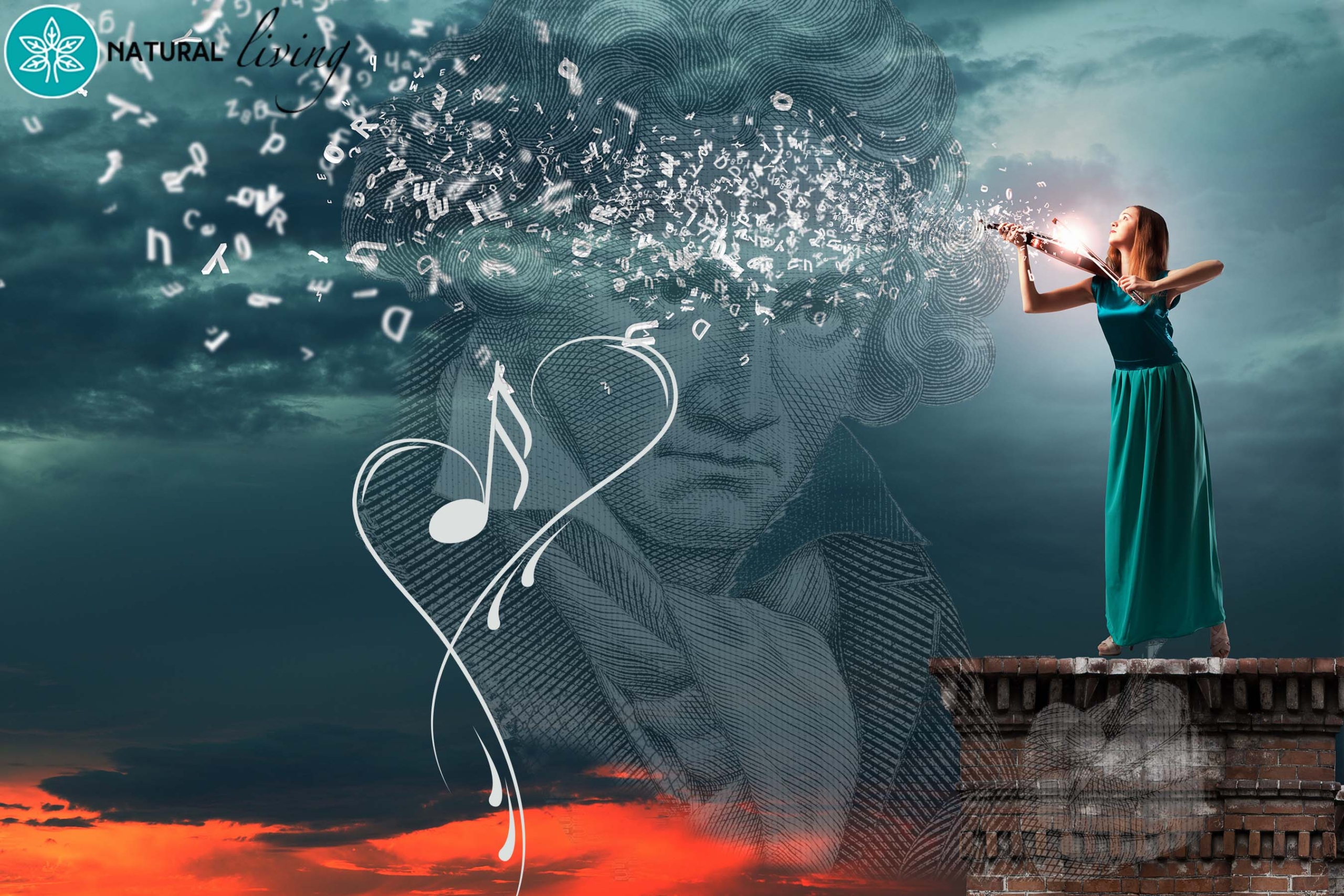 The healing power of music has resonated through the human soul and body from the time of the ancient Greek philosopher Aristotle to the present day era of cognitive science. Use the beauty of truly great music to unlock a world of emotional experience.

The ancient fathers were wise in the ways of nature. Very early they became acquainted with an astonishing variety of methods to heal the body and mind, amongst them the power of music to soothe and elevate the spirit of man. This was noted by the ancient Greek historian Polybius who remarked on the innate gentleness of those who appreciated music as compared to those who neglected its cultivation.1

There is one composer who personifies classical music for millions of listeners all over the world – Ludwig van Beethoven. According to H.A. Lingerman,2 Beethoven is the first real musical psychologist, one who explores the psyche of mankind’s sufferings and helps humanity to grow. His music throbs with joys, sorrows and unleashes great waves of power in the listener. Sometimes angry, sometimes peaceful, his music is full of fighting spirit, courage and strong willpower, sometimes grande-like in its force. But it can also be tender and lyrical and devotional. Although we cannot see or touch music, it evokes and creates a clear and sure world. It brings great beauty into our lives. It alights, lingers and vanishes, synonymous with the eternal nature of beauty. Like music, beauty dwells in some invisible realm adjacent to us, yet it never becomes our possession.

Works which are refreshing and sufficiently stimulating to keep the mind alert but which do not demand too much concentration are the first and second movements of Beethoven’s Fourth Symphony and the slow movement of his Eighth Symphony. These pieces have the ability to bring positive qualities of caring, mental clarity, relaxation and vigour. Music exerts either a stimulating or calming effect on the nervous system. Beethoven’s Moonlight Sonata soothes the most commonplace distress. And you will also find the more gentle and lyrical Beethoven in the slow movements of his Pathétique Sonata.

Beethoven was justly famous for being able to evoke specific emotions in his listeners and wrote pieces that we still listen to today to evoke joy, sadness, loss and return. His piano sonata Les Adieux couldn’t be clearer if he had written a short story: two lovers part, they experience their loneliness, but are joyfully reunited in the last movement.

BEETHOVEN AS AN INSPIRATIONAL FIGURE

In his book, Divine Beauty, John O’ Donohue3 describes the haunting beauty of Beethoven because he created music out of his own suffering. It is one of the loneliest ironies in the world of classical music that this magnificent composer suffered illness precisely when he reached the height of his career. Beethoven became deaf. For someone like Beethoven, for whom life was music, it is unimaginable what pain this caused. Yet, in the face of this adversity, he created divine music from the depth of silence. His work shows the triumphs over fate, and his Eroica or Third Symphony chants the great transition where the soul moves towards acceptance and integration with his destiny. Beethoven’s masterpiece, the Fifth Symphony, was composed when he could only feel the vibration of the piano because he was completely deaf.

Great music is not a matter of great ideas or intricate melodies. It is not about difficult phrasing or complex harmonies. Truly great music brings to expression the states of the soul. This huge nobility enhances the heart and opens the imagination to deeper mystery and riches of being here. The human soul is tested and exposed to suffering and there is an elegance in the way great music like Beethoven’s explores suffering.

THE SCIENCE OF THE BEAT

According to Clynes,4 leader of the research centre at New South Wales Conservatorium of Music, several of the great classical composers such as Mozart, Beethoven, Schubert a and Brahms produced a characteristic pulse that became a hallmark of their work.  And it is the pulse that does much to determine the subtle characteristics of music, and which creates a heart beat effect (80 beats per minute)  that synchronises the rhythm to the pulse of relaxation.

The striking rhythms found in some of Beethoven’s most famous works may have been inspired by his own heartbeat, says a team of researchers from the University of Michigan.5 This means that the synergy between our minds and bodies shapes how we experience the world. He composed the Piano Sonata no. 26 in E-flat major – Opus 81 – during a time when he was under considerable stress when Austria declared war against France. This piece has an irregular dotted rhythmic pattern of two short notes and one large note. Researchers also identified arrhythmic patterns in the final movement of Beethoven’s String Quartet in B-flat Major Opus 130 and the opening of the Les Adieux Sonata (Sonata Opus 81a, in E-flat major) written during the French attack on Vienna in 1809. According to Dr Zachary Goldberger6, Beethoven may have been suffering from a heart rhythm disorder, arrhythmia which was reflected in these works. This means Beethoven may have been mirroring his own physical sensations in his compositions.

It is now clear that emotion circuits, such as the limbic/paralimbic systems and the pre-frontal cortex, are important for music – inducing emotions and interacting with EEG rhythms generated via the cortex. Interesting research has been done on the effect of Beethoven’s Fifth Symphony and health benefits. In the first study, a total of 19 participants listened to the first movement of Ludwig von Beethoven’s 5th symphony for a duration of 7.4 minutes, during which a continuous EEG was recorded. In a second session, the subjects evaluated their emotional arousal during the listening. Results indicate that music is a powerful arousal-modulating stimulus. This also shows that according to the results a long piece of music is capable of inducing consistent changes in brain functional states associated with arousal and emotions. This means this piece of music can help unfold emotional power. We humans appear to listen to music specifically because of this. When music ‘speaks’ our emotions ‘listen’. We have bypassed the intellect and thus have a greater unique power to heal.

From a study of the Federal University of Rio de Janeiro the Fifth Symphony may help cure cancer. The survey analysed MCF-7 cells which are linked to breast cancer. By exposing these cells to the famous theme, one in five cancer cells eventually died. They began their work with the Mozart effect, which caused no change in the cells, but Beethoven’s music killed an average of 20% of the cancer cells, besides causing a decrease in size and granularity.7

To experience Beethoven’s symphony numbers three, five, six, seven and nine are like experiencing a complete lifetime of feeling and movement. For many, Beethoven’s music broadens relationships and awakens compassion and the desire for universal brotherhood. For nervous exhaustion, we need the deep serene beauty of the Variations from Beethoven’s Appassionata Sonata. If music arouses a pleasurable emotion, it will promote the flow of digestive juices and this flow causes a more thorough digestion. Our stomach is a very sensitive organ that reacts quickly to emotional changes. Unpleasant emotions bring about certain changes which give rise to distress. Music is the best antidote for unpleasantness at the dinner table. Digestion is influenced by two factors: glands and nerves. Music acts upon both. It has a marked effect on the glands causing either an increase or decrease of secretions.

In Beethoven’s music lies a world of experience – of heartache and of exhilarating, electric victory. It is a cry from the heart, a shout of triumph, an ode to joy. And according to Michael Walsh, music critic for Time Magazine, he is a composer for all moods, all tastes, all seasons.8

Dr Frances le Roux is a registered physiotherapist in Fish Hoek, Cape Town, South Africa. She has a special interest in music/medicine based on her research regarding music and pain, immune systems and spiritual well-being. She is a member of the International Music in Medicine Association and is on the International Editorial Board of Music and Medicine Interdisciplinary Journal. She published two books: Music is Healing and Music and Babies. Visit her website http://www.fhleroux.co.za/
Toggle Sliding Bar Area
Go to Top