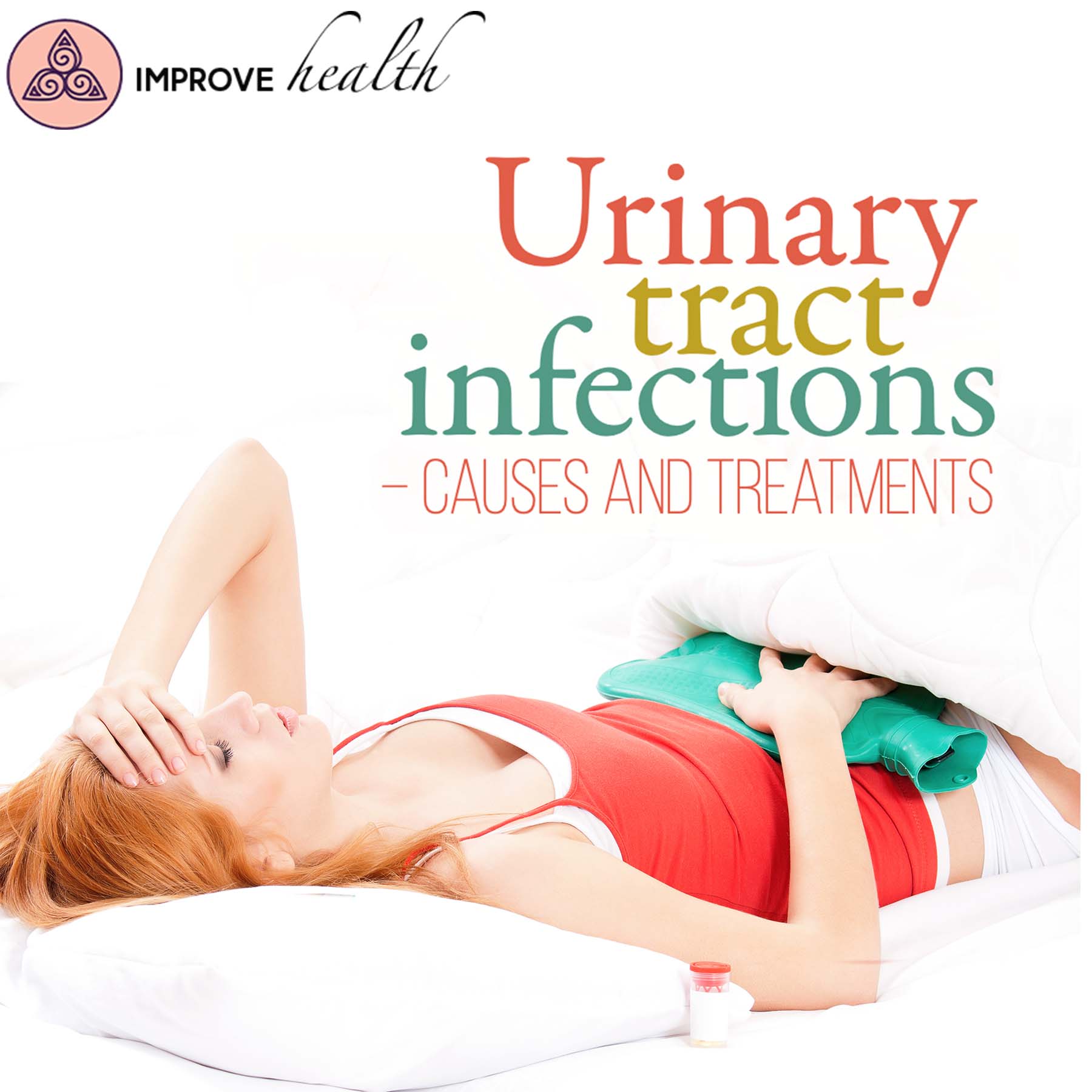 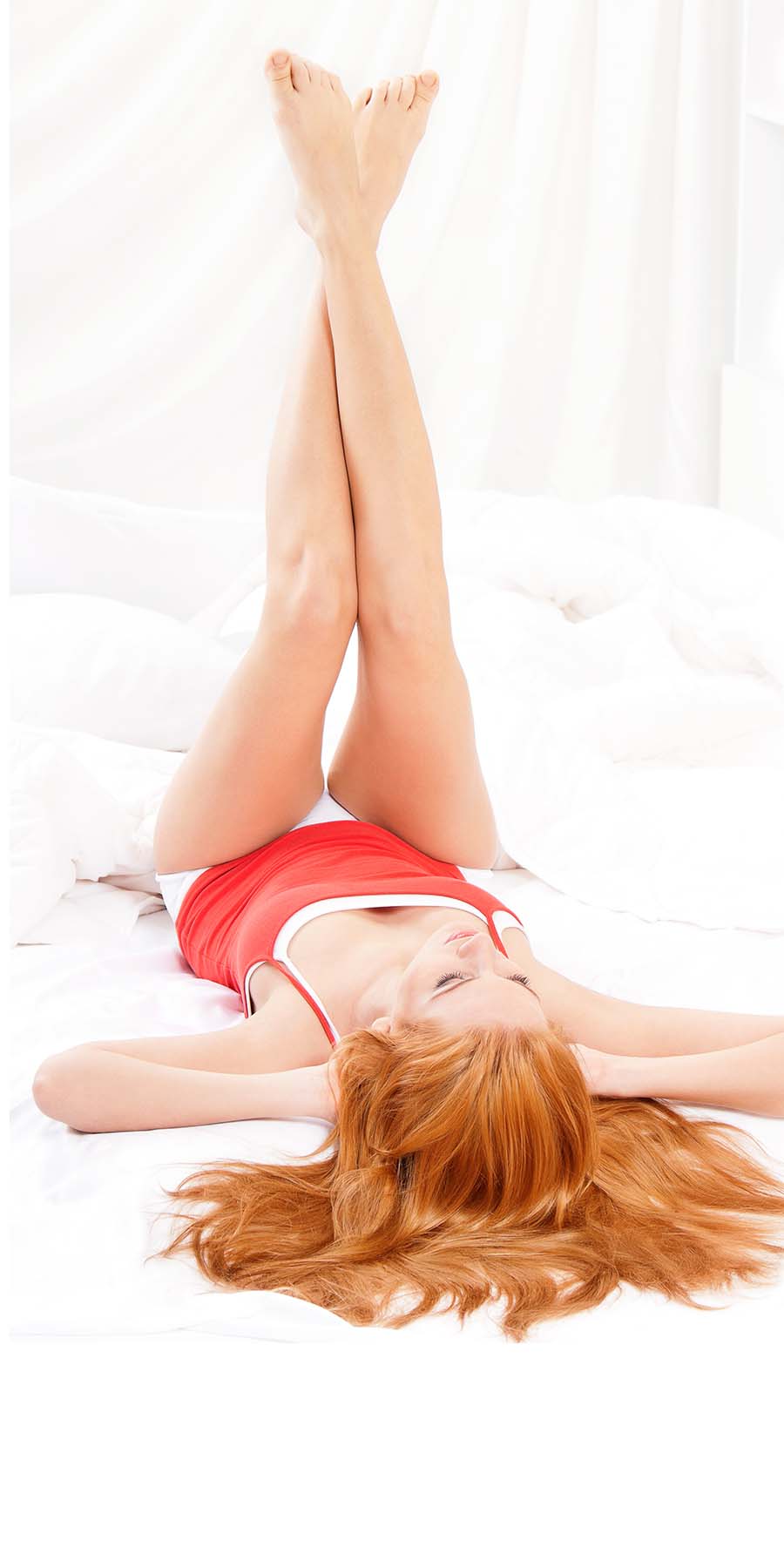 Urinary tract infections (UTIs) are the second-most common infection in women and as such their causes and treatment options deserve attention here.

Most cases of UTIs can be cured by a course of antibiotics aided by increased fluid intake. The problem lies with those sufferers who have recurring infections, often due to poor inner self-healing. These are more likely to develop serious kidney problems if the chronic infection is not dealt with effectively. In these people, the aims of natural therapy are four-fold: alleviate the symptoms, identify and eliminate the causes, enhance inner healing mechanisms by adopting a more congenial diet and lifestyle, and moderate the personal habits which encourage further infections.

HAVE I GOT A UTI?

The defining symptoms of a UTI, aka cystitis, are burning pain when urinating, and increased frequency and urgency of urination, especially at night. These may be accompanied by fever, tremor, chills, nausea, and sometimes vomiting. To compound the misery which UTIs inevitably bring, the urine passed may be cloudy, rather smelly, dark in colour and, alarmingly, contain blood. In children, diarrhoea, incontinence, and crying from abdominal pain are useful signs of a UTI, which is thankfully rare.

WHAT CAUSES A UTI?

Bacteria are present in virtually all parts of the body. They are usually benign, and live in harmony with us. However, if the body loses the ability to deal with alien or hostile bacteria, this harmony is disturbed, and an overgrowth of pathogenic bacteria or fungi develops.

A UTI occurs when the innate defence mechanisms begin to fail, due to ageing, taking certain drugs, poor personal habits, or inadequate diet.

For someone with a UTI, the culprit is usually (in around 90% of cases) Escherichia coli (E. coli), which take up residence in the bladder.

These are gut bacteria which have migrated from the digestive tract into the urethra and thence to the bladder. The bacteria attach themselves to the bladder wall in most cases of UTI, and are notoriously difficult to dislodge. Sometimes the cause may be a fungus, especially Candida, especially in diabetics and those receiving anticancer therapy.

Repeated courses of antibiotics increase the risk of side effects. Long-term antibiotic therapy is linked to nerve damage, poor kidney function and other serious consequences. 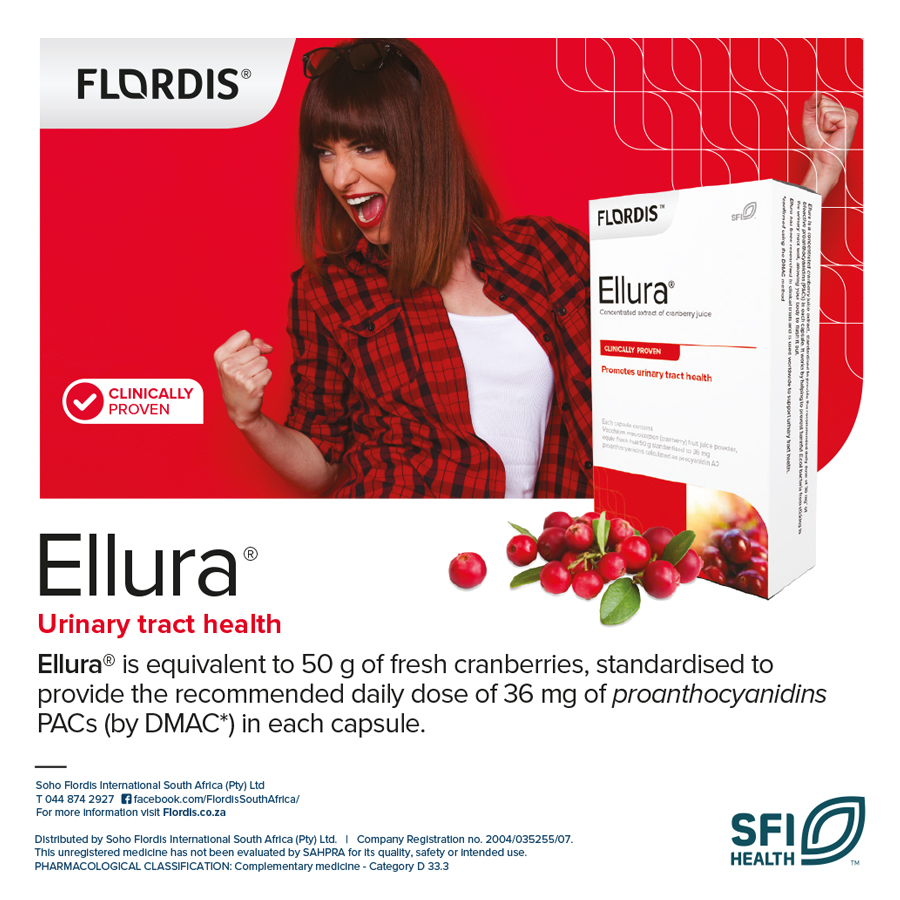 The human is no passive victim to a UTI. We possess a range of actions which prevent infection:

People with diabetes are particularly prone to UTIs. In South Africa, the rising tide of type 2 diabetes is bound to lead to more reports of UTIs. Diabetes depresses the body’s defence mechanisms and the presence of sugar in the urine, which is characteristic of diabetes, boosts the growth of E. coli. Untreated diabetes damages the nerves supplying the bladder, resulting in urinary stasis, where the bladder does not empty totally.

DIAGNOSIS IS NOT DIFFICULT

As UTIs are so common in women, the healthcare professional will be quite familiar with anyone presenting with the disorder. The signature symptom of burning and pain when urinating is a reliable pointer to diagnosing UTI in women. Confirmation is possible by reviewing personal medical history and physical examination. If any doubt remains, there are more specific tests that can be conducted.

Physical examination may reveal a high body temperature, a rapid heart rate, and a tender-to-touch area around the kidneys. Blood tests should detect red and white blood cells, and most likely the offending bacteria or fungi. If any doubt remains, then ultrasound or other imaging techniques should confirm the diagnosis.

UTIs are rare in men, largely due to basic anatomical differences – a longer urethra, which makes bacterial infection of the bladder logistically less likely. Even so, the need to treat recurring UTIs in men is equally urgent, and the same principles apply.

WHY RECURRENT UTIs MUST BE TREATED

There is a real risk that recurring UTIs may lead to damage of other parts of the urinary tract, especially the kidneys. In addition, UTIs upset the balance between different species of microflora in the gut, leading to super-infection with pathogens. 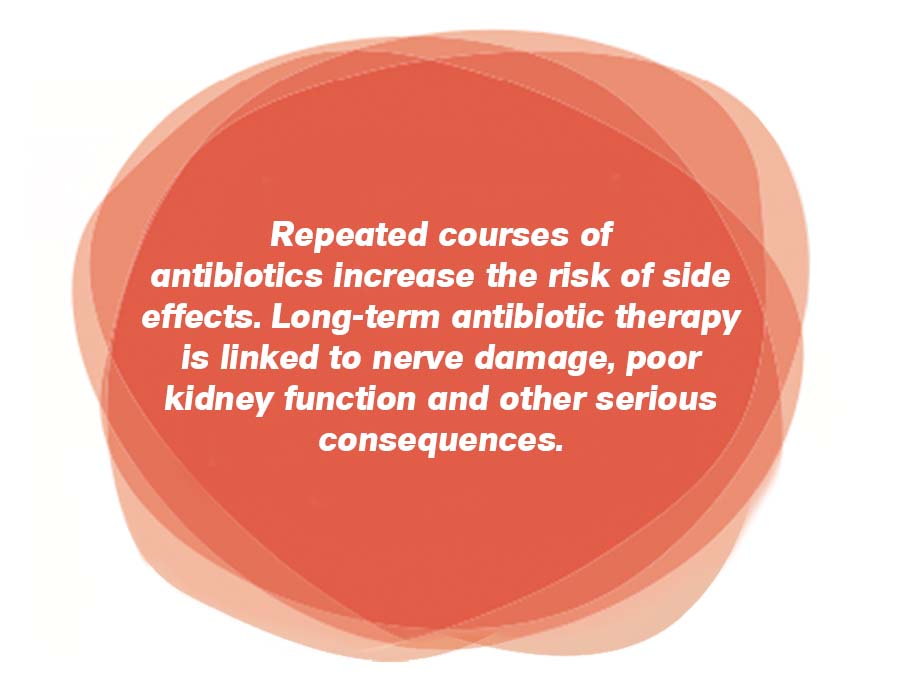 The natural treatment of UTI follows four routes: physical measures, herbal remedies, lifestyle changes, and additives and personal habits. All of these are adopted in order to support and augment our power for inner healing.

First, one of the first things to do when we suspect a UTI is to increase fluid intake. This can take the form of a glass of water, or a herbal, black, or rooibos tea, or diluted fruit juice every hour or so. This helps flush away the bacteria responsible. Second, apply heat via heating pads to alleviate the often distressing symptoms. Third, try to get some exercise, especially by swimming or brisk walking. Fourth, take relaxing Sitz baths, with apple cider vinegar added to the water.

Many swear by authentic, sugar-free cranberry or blueberry juice as a powerful antidote to UTIs. These contain natural substances that prevent the bacteria causing the UTI from binding to the inner lining of the bladder. It should be said that there is some debate on the true efficacy of these juices.

Upland cranberry, or Uva ursi, is effective for treating UTI.

Goldenseal is a well-established agent for dealing with UTIs, in view of its proven antimicrobial properties.

Buchu is a fragrant plant, loved by South African gardeners. It is also a valuable herb, effective in a broad range of ailments, including infections and other disorders of the urinary tract. It is available in capsule form. 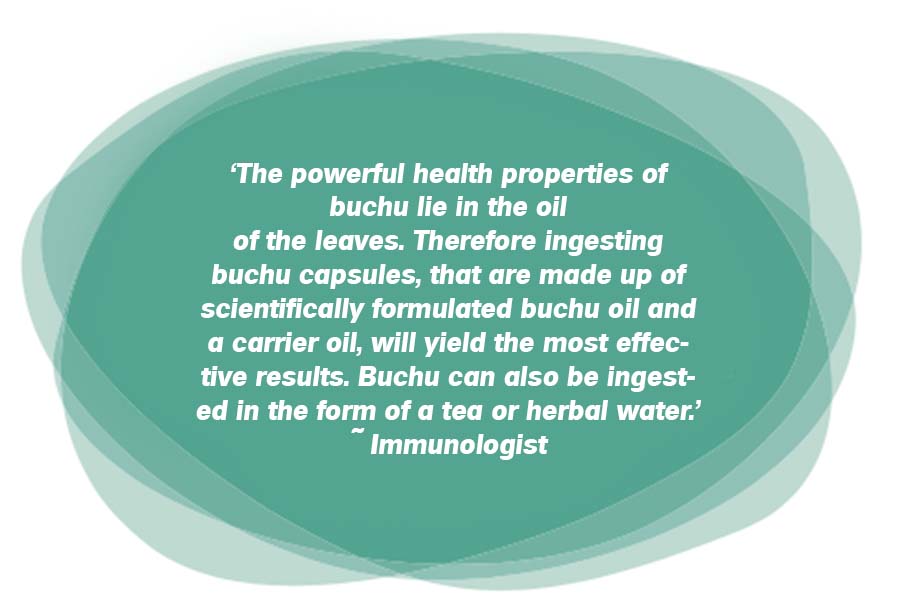 Proponents of natural medicine, such as Tibb, advocate consumption of foods which are qualitatively cold and dry in nature, as they oppose the hot and moist disorder which typifies UTI. These include fermented foods such as yoghurt, organic mushrooms, lean beef, and in-season cauliflower. Food and drink to avoid include spicy foods, caffeinated beverages, sweetened and alcoholic drinks, and sweetening agents. Avoid GMO food products.

Probiotics look promising for treating UTI, especially in women. These are oral supplements that are similar to the healthy bacteria found in the gut. As they boost inner healing and regulate inflammation, they oppose invasion by hostile bacteria. They are particularly effective in treating recurring infections.

D-mannose also offers an alternative. It is a simple sugar, closely related to glucose, and is present in cranberry and other berries, and in apples and peaches.

One particularly effective measure is to void the bladder whilst showering, as the warm water encourages complete bladder emptying. Residual urine is the source of recurring infection, as it provides the ‘seeding’ for further infection.

About the Author: Dr John Glynn

Dr John Glynn has a PhD in biochemistry from the University of Leeds, UK. He has been involved for many years in technical training to the pharmaceutical industry, designing and developing training material for distribution both locally and internationally. For the past 15 years he has been involved in compiling effective course material for several Tibb development programmes, as well as assisting in the research activities and technical writing of the Ibn Sina Institute of Tibb.
Toggle Sliding Bar Area
Page load link
Go to Top